Crime Fiction on a Euro Pass is a community meme hosted by Kerrie at Mysteries in Paradise has come to an end this week. The idea behind is that participants write a post linked to the country of the week. This week’s country is Turkey. You can visit HERE the contribution of other fellow participants. 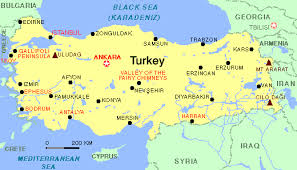 Istanbul (Turkish: İstanbul), historically known as Byzantium and Constantinople, is the largest city of Turkey. Istanbul metropolitan province (municipality) had 13.26 million people living in it as of December, 2010, which is 18% of Turkey’s population and the 3rd largest metropolitan area in Europe (if its Asian half is counted) after London and Moscow. The city in its administrative limits had 8.8 million residents counted in the latest Turkish census from 2000. Istanbul is a megacity, as well as the cultural, economic, and financial centre of Turkey. It is located on the Bosphorus Strait and encompasses the natural harbour known as the Golden Horn, in the northwest of the country. It extends both on the European (Thrace) and on the Asian (Anatolia) sides of the Bosphorus, and is thereby the only metropolis in the world that is situated on two continents. Istanbul is a designated alpha world city.

During its long history, Istanbul has served as the capital of the Roman Empire (330–395), the Eastern Roman (Byzantine) Empire (395–1204 and 1261–1453), the Latin Empire (1204–1261), and the Ottoman Empire (1453–1922). When the Republic of Turkey was proclaimed on 29 October 1923, Ankara, which had previously served as the headquarters of the Turkish national movement during the Turkish War of Independence, was chosen as the new Turkish State’s capital. Istanbul was chosen as a joint European Capital of Culture for 2010 and the European Capital of Sports for 2012. Istanbul is currently bidding to host the 2020 Summer Olympics. The historic areas of the city were added to the UNESCO World Heritage List in 1985. (Taken from Wikipedia) See also: Istanbul City Guide.

Petros Márkaris was born 1 January 1937, in Istanbul. The son of an Armenian entrepreneur and a Greek mother, he went to school at the St. George’s Austrian High School in Istanbul and studied after his Abitur for some years in Vienna and in Stuttgart. Because of his father, he belonged to the Armenian minority for many years and did not have any citizenship; he became a Greek citizen shortly after 1974, together with the rest of the Armenian minority in Greece. Markaris speaks and writes in Greek, Turkish and German. Today he lives in Athens. (From Wikipedia) See also my previous posts

2 thoughts on “Crime Fiction on a Euro Pass – Istanbul (Turkey)”