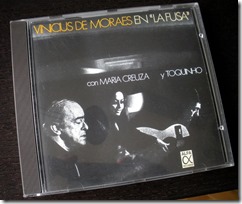 Vinicius de Moraes en “La Fusa” con Maria Creuza y Toquinho (1970) is considered one of the best live albums of Brazilian popular music. It was the result of the encounter of the poet with two young and talented Brazilian musicians and was recorded live at a famous club in Buenos Aires, La Fusa. The album marks the first appearance of Vinicius with his new musical partner, the guitarist and singer Toquinho.

Special reference should be made to the interaction of the poet with the audience who earned great applause with the songs Canto de Ossanha and Garota de Ipanema (The Girl From Ipanema).

A must for Brazil’s music fans.