The Human Flies (Mantle, 2014) Translated from the Norwegian by Kari Dickson. Originally published in 2010 as Menneskefluene, by Hans Olav Lahlum (B)

The Hummingbird (Arcadia Books, 2014) Translated from the Finnish by David Hackston. Originally published in 2013 as Kolibri by Kati Hiekkapelto (A)

The Silence Of The Sea (Hodder & Stoughton, 2014) Translated from the Icelandic by Victoria Cribb. Originally published in 2011 as Brakid by Yrsa Sigurðardóttir (B)

And The Game’s Afoot pick of the month is James M. Cain’s Double Indemnity. 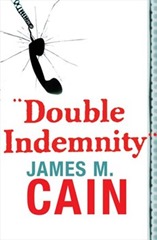 “I stared into the darkness some more that night. I had killed a man, for money and a woman. I didn’t have the money and I didn’t have the woman. The woman was a killer, out-and-out, and she had made a fool of me. She had used me for a cat’s paw so she could have another man, and she had enough on me to hang me higher than a kite. . . . I got to laughing, a hysterical cackle, there in the dark.”

A true roman noir classic in my view and a must read.