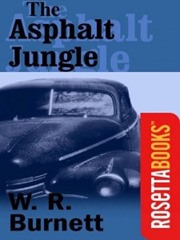 The Asphalt Jungle, the first book in W. R. Burnett’s urban trilogy. A gripping tale of the planning and execution of a jewellery store heist in a dark and corrupt Midwestern metropolis. Set amid a seedy urban wasteland of crooks, killers and con-artists, the various members of the gang are steadily undone by personal obsessions, double-crossing and cruel fate. (Source: Goodreads).