Luar Na Lubre has become one of the most stable Galician folk groups in the last decade. Most of the group’s music are new arrangements of traditional Galician music found in old books and collected by doing field research. Luar Na Lubre adds its personal touch to Galician music by combining traditional instruments with instruments from other traditions and by composing original songs. The band uses fiddle, guitar, flutes, bouzouki, tambourines, bodhrán, pandeiro (Galician frame drum) harp, Galician pipes, accordion, and zanfona (hurdy gurdy). Luar Na Lubre accomplished several milestones in the past few years. With their albums, Plenilunio and Cabo Do Mundo they sold more than 80,000 copies of each. The band also collaborated with English artist Mike Oldfield, performing on one of his tours. Mike Oldfield recorded on his album Voyager the Luar Na Lubre song “0 Son Do Ar“, which he called “The Sound of the Sun”. This particular song is what has brought the group considerable international recognition. In 2005 singer Rosa Cedron left the group. She was replaced by Portuguese singer Sara Louraco Vidal. Vocalist Sara Vidal left the band in 2011. Paula Rey joined Luar Na Lubre as new vocalist. (Source: World Music Central.org)

Recently I’ve come across two other wines from Bierzo that are worth mentioning. Though I have only tasted some small sips that have left me wanting more. 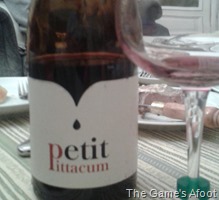 Petit Pittacum 2014 is a red wine made by the Pittacum winery in Bierzo. Petit Pittacum is a varietal Mencia, an indigenous variety of Bierzo. The grapes come from ancient vines grown on steep slopes of clay, part of the mountainous area which makes up Bierzo. This mountain resort is oriented east and north, giving Petit Pittacum a marked Atlantic character. For the preparation of Petit Pittacum, the harvest is done manually and the grapes are moved to the cellar in boxes of 12 Kg. Once there, grapes undergo manual selection on a table. After pressing, the grapes are introduced into tanks where they are fermented for 15 days at 25 ° C. During the fermentation, the grape is shaken with the intention of preserving all the fruit and making a selective extraction. Finally, Petit Pittacum ages for 3 months in Spanish barrels. (Source: Decántalo). Bodegas Pittacum belongs to Grupo Terras Gaudas. Read more in Spanish here. 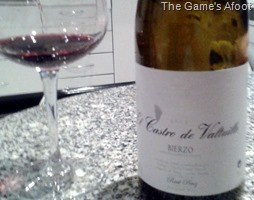 Castro de Valtuille Mencía Joven 2014 is the newcomer at Bodegas Castro Ventosa, a traditionally-run winery owned by the Pérez family and located in Valtuille de Abajo. After the departure of Raúl Pérez, the pioneering oenologist of the Bierzo region, there have been no major changes at the winery. Yet it is unquestionably true that Raúl Pérez left a definite stamp on the bodega, endowing the wines with their Burgundy style and thereby creating absolute treasures. Read more here.

My next stop will be Bodegas y Viñedos Raúl Pérez, and taste some of the most recognised wines in the region, the Ultreia wines, particularly the Ultreia de Valtuille an upmarket wine. Its 2012 vintage got 95 Points Parker.

Ultreia de Valtuille is a red wine of very limited production, its first vintage held great international acclaim. “Ultreia” was the greeting that formerly used by pilgrims who were on the road to Santiago. It is a Latin word which today would translate as “forward” or “continue”. Ultreia de Valtuille is a single variety of Mencia old variety made with grapes from a single farm, “The Villegas” located in the small town of Valtuille. It is an estate of just over 1 hectare of old vines, planted in 1908, on a calcareous clay soil with lots of sand on the surface. It is located at 530 metres above sea level and has an Atlantic-continental climate, which is cold yet with a relatively moderate climate as it is an area located halfway between the land and the coast. The wine production is done without much intervention. Fermentation takes place in vats. After the fermentation, there is a long maceration and extraction. Ultreia de Valtuille spends 14-15 months aging in French oak barrels used for wine. Once matured, it is bottled without filtering or clarification. Raúl Pérez is a connoisseur of the Mencia variety, with Ultreia de Valtuille one of his masterpieces. (Source:  Decántalo)

Raúl Pérez is one of Spain’s brightest winemaking stars, a national treasure of Spain much like Rafael Nadal. Born into a Bierzo winemaking family, he has established his own winery in the region and now oversees production of his family’s wines at Castro Ventosa. He started winemaking in a garage back in 2002 with a bunch of good Albariño and a handful of 750 litres barrels, including hard work, lots of encouragement and an underwater ageing process that revolutionizes the art of winemaking. Unafraid of failure and pushing boundaries, he has taken the art of winemaking to a new level. Raúl Pérez is driven and his top-quality wines, with a limited production, prove it. There are many talents who grew up with vines, who innovate, who study intently the world’s wines and their making. Raúl has this and more: an uncanny knack for knowing what a vineyard needs and how to treat that vineyard’s grapes once in the winery to achieve their greatest expression. He believes that wine is made in the vineyard, but is undeterred from trying a multitude of strategies to find that vineyard’s voice. (Source: Pasion)

Moche Art from Ancient Peru. Gold, Myths and Rituals. Organised and produced by: ”la Caixa” Foundation, in cooperation with the Larco Museum of Lima (Peru). Curator: Ulla Holmquist, curator at the Larco Museum. Place: CaixaForum Madrid (Paseo del Prado, 36). Dates: from 3 July to 4 October 2015. This exhibition has been previously on view for the first time at CaixaForum Barcelona (Av. de Francesc Ferrer i Guàrdia, 6-8), from 5 March to 7 June 2015. 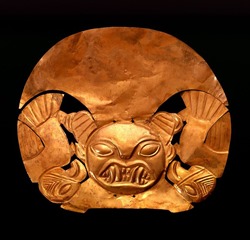 Between the years 200 and 850 AD, a series of chiefdoms and kingdoms of great cultural complexity emerged in the valleys and deserts of what is now the northern coastline of Peru. Moche societies represent a truly singular example of cultural, economic and political development centuries before Inca expansion began. The first state societies in the southern hemisphere, they invented some of the most advanced metalwork and pottery-making processes in the world, as well as building veritable adobe mountains for their religious practices. And with all this, their population and production capacity increased enormously. Through 200 Moche artworks from the Larco Museum in Lima (Peru), the exhibition explores how the cultures that emerged in what is now Peru before Inca domination understood the world and organised their societies. The works featured include ceramics, jewellery and ceremonial objects made in precious metals, textiles, and ritual objects made from wood, stone, shell and bone. (Source: Press release Moche Art from Ancient Peru. CaixaForum Barcelona).