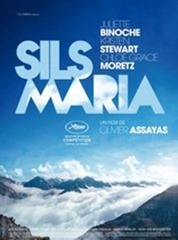 Synopsis: At the peak of her international career, Maria Enders (Juliette Binoche) is asked to perform in a revival of the play that made her famous twenty years ago. But back then she played the role of Sigrid, an alluring young girl who disarms and eventually drives her boss Helena to suicide. Now she is being asked to step into the other role, that of the older Helena. She departs with her assistant (Kristen Stewart) to rehearse in Sils Maria; a remote region of the Alps. A young Hollywood starlet with a penchant for scandal (Chloë Grace Moretz) is to take on the role of Sigrid, and Maria finds herself on the other side of the mirror, face to face with an ambiguously charming woman who is, in essence, an unsettling reflection of herself. (Cannes Festival Official Selection)

Clouds of Sils Maria (aka Sils Maria) was selected to compete for the Palme d’Or in the main competition section at the 2014 Cannes Film Festival on 23 May 2014, and also screened at the Toronto International Film Festival and New York Film Festival. It won the Louis Delluc Prize for Best Film in December 2014 and a best supporting actress César Award for Kristen Stewart in February 2015.

Begoña and I went to see recently Clouds of Sils Maria. Enough is to say that I found the film pretentious, dull and based exclusively on lengthy dialogues to which, I’m sorry to say, I’ve not been able to see any meaning.

This film, which deals with the past, our relationship to our own past, and to what forms us, has a long history. One that Juliette Binoche and I implicitly share.

We first met at the beginning of both our careers. Alongside André Téchiné, I had written Rendez-vous, a story filled with ghosts where, at age twenty, she had the lead role. Even then, the film looked at the Invisible and the path a young actress takes towards the attaining fulfilment in a role. Since then, our paths have run parallel, only crossing much later when we shot Summer Hours together in 2008.

It was Juliette who had first had the feeling there was some missed opportunity, or rather film, that remained virtual in our shared history, and that would bring both of us back to the essential. With this same intuition in mind, I began taking notes, then breathing life into characters, and then into a story that had been waiting to exist for a long time.

Writing is a path, and this one is found at dizzying heights, of time suspended between origin and becoming. It is no surprise that it inspired in me images of mountainscapes and steep trails. There needed to be Spring light, the transparency of air, and the fogs of the past, those of the Cloud Phenomena of Maloja. A path that both brought me back to where everything started, for Juliette and myself, and where we find ourselves today, in our questions about the present, and especially the future.

Maria Enders is an actress. With her assistant, Valentine, they explore the wealth and complexity of characters created by Wilhelm Melchior – characters who still have yet to give up all their secrets, even twenty years later.

But it is not so much about theatre and its illusions, nor about the meanderings of fiction, so much as it is about the Human, of the simplest and most intimate kind.

In this respect, words, those written by authors, those that actors appropriate, those that spectators allow to resonate within themselves, evoke nothing other than the questions we all ask ourselves, everyday, in our own interior monologues.

Yes, of course, theatre is life.

And even a little better than life, because it unveils grandeur in the best of situations and the worst, in the trivial and in our dreams. In this sense, Maria Enders is neither Juliette Binoche nor myself. She is each of us through this necessity to revisit the past – not to elucidate it, but rather to find the keys to our identity, which has made us who we are, and which continues to push us forward. She peers into the void and observes the young woman she was at age 20. At heart, she’s still the same, but the world has changed around her, and her youth has fled – youth as virginity, as discovery of the world. This does not come around twice.

On the other hand, we never forget what our youth has taught us: this constant reinvention of the world, the deciphering of hyper-contemporary reality and the price one must pay to be part of it. Giving every new time the urgency and danger of a first time.

It is the confrontation between the past and present of a landscape that appeared to me as an ideal setting for a comedy – or drama, depending on the perspective one chooses – of an actress diving into the abyss of time, either out of professional or moral obligation, rather than desire.

When we stare into this void, it does not reflect much aside from our own image, frozen in the absolute present. This snapshot is at the heart of Sils Maria. Maria Enders discovers herself to be diffracted into a thousand avatars that resonate in the virtual world of fame – and detestation – of modern media. This is where the border between the most intimate, the most pathetically banal, and virtual public space is erased. We look for it, but cannot find it. Perhaps it simply no longer exists.

Is Maria Enders the young girl who once played Sigrid in Wilhelm Melchior’s film, is she the adult, the mature woman that other people see her as being; or perhaps is she still one of the characters she embodied, or another of the faces that appear when one types her name in Google Images or on YouTube?

Is there anything she can still cling to, if not the secret of her own privacy, the one place where time cannot leave its trace?

The place where it can only flow, like the Cloud Phenomena of Maloja?

Very early on, I thought of clouds, of the sky above the Engadin Valley, of how simultaneously immutable and moving a landscape can be, which is both intimidating and so human. It is strangely inscribed in time, and has witnessed all the beings who have roamed through it, merged with it, from every period. And who have experienced its dizzying heights.

In 1924, at the dawn of cinema, Arnold Fanck, one of the pioneers of mountain photography, filmed the strange Cloud Phenomena of Maloja where mountaintops, clouds and the wind all mix together abstractly, evoking classical Chinese painting. He shot it in black and white, and the only form in which it now exists is a worn and scratched-up print. In a word, a memory of what might have been and onto which time, in turn, has engraved itself.

It is nevertheless unsettling to feel an intimate and mysterious truth in these spaces, despite (or thanks to) the filters that separate us from them. They reveal themselves through a remote subjectivity, with nearly a century between us.

Is this not the exact process of art, which reproduces the world but though a singular gaze, which takes away as much as it reveals, indifferently bringing to light the visible and invisible? (Olivier Assayas)