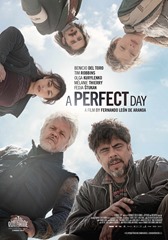 A Perfect Day is a 2015 Spanish drama film written and directed by Fernando León de Aranoa. It is based on the novel Dejarse Llover by Paula Farias. It was screened in the Directors’ Fortnight section at the 2015 Cannes Film Festival. (Source Wikipedia)

Synopsis: A group of aid workers tries to remove a cadaver from a well in an armed conflict zone. The body was thrown into the well to contaminate the water and cut the water supply to the local population.But circumstances soon turn a simple task into an impossible mission. The workers cross the frenzied war landscape like guinea pigs in a maze, and there might be no way out. A war inside another war, in which the only enemy could be irrationality. The crisis they’re trying to solve is humanitarian, but they’re only human. Humor, drama, tenderness, routine, danger, hope: it all fits into a perfect day. This film’s only genre is life itself. Like a Russian doll, it’s a drama inside a comedy, inside a road movie, inside a war movie. (Sucre: West End Films)