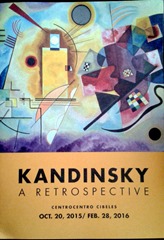 The one in CentroCentro Cibeles, Plaza de Cibeles 1, Madrid, it is probably the largest exhibition dedicated to Vassily Kandinsky made in Spain. From 20 October to 28 February we can enjoy Kandinsky A Retrospective a great exhibition dedicated to the Russian artist Vassily Kandinsky (1866-1944) that has been organized in collaboration with the Centre Pompidou in Paris and Arthemisia Group, and it is curated by Angela Lampe, Curator of Modern Art at the National Museum of Modern Art at the Pompidou Centre.

The exhibition is divided chronologically into four chapters which trace the various episodes of Kandinsky’s life. At the age of thirty he was studying law an economics, but decided to abandon his university career and leave Russia for Munich in order to became a painter. It seems that two aesthetic experiences had been decisive for him. The first was the discovery of one of Claude Monet’s Haystacks in a Moscow gallery: the force of its non-figurative approach made a permanent impression on him. The second, shortly after,was a performance of Lohengrin at the Bolshoi Theatre. Wagner’s opera was a revelation of the power inherent in an art as abstract as music, which was capable of generating brightly colours mental images. The synthesis of the arts was to become a constant in Kandinsky’s work, and central to his famous publications, Concerning the Spiritual in Art and the Blaue Reiter Almanac, which he co-published with his friend Franz Marc in May 1912. The outbreak of World War One put an end to the vibrant Munich period. Kandinsky had to return to his native land, where he helped to reorganise artistic life in revolutionary Russia, up until the moment when he was invited by the founder of the Bauhaus, the architect Walter Gropius, to come to Germany an join the latter’s renowned art school in Weimar. Along with Paul Klee, Kandinsky became a leading figure in the innovative educational system. When the institution was closed by the Nazis in 1933, he was obliged to go into exile yet again, this time in Paris, where he remained until the end of his life. Angela Lampe. (Taken from the exhibition programme)

This travelling exhibition was on display in 2014 at the Palazzo Reale in Milan, before travelling to Milwaukee and Nashville, United States. In Madrid it will be on show in CentroCentro until February 28, 2016. If, on these dates, you happen to be here, do not miss the opportunity of visiting the exhibition, Begoña and I went this morning.

One thought on “OT: Kandinsky A Retrospective”