US / 103 min / B&W /  Fritz Lang Productions (as A Fritz Lang Production) and Diana Production Company (as A Diana Production) Dir: Fritz Lang Pro: Walter Wanger, Fritz Lang Scr: Dudley Nichols based on the French novel La Chienne (“The Bitch”) by Georges de La Fouchardière, that previously had been dramatized on stage by André Mouëzy-Éon Cine: Milton R. Krasner Mus: Hans J. Salter, Ernie Burnett (“Melancholy Baby”) Cast: Edward G. Robinson (Christopher Cross), Joan Bennett (Kitty Marsh), Dan Duryea (Johnny Prince), Margaret Lindsay (Millie Ray), Rosalind Ivan (Adele Cross), Jess Barker (Janeway). Summary Plot: At a dinner celebrating twenty-five years of employment, cashier Christopher Cross (Edward G. Robinson) is awarded an engraved watch by his boss, J. J. Hogarth (Russell Hicks), who later leaves the party with a stunning blonde, which impresses Chris. Walking home, Chris breaks up a violent quarrel between a man and a woman and, after the man flees, offers to escort the woman home. She introduces herself as Katherine “Kitty” March (Joan Bennett) and asks Chris to buy her a drink first. Flattered and hoping to impress Kitty, Chris tells her that he is an artist and his modesty prompts her to suspect he is wealthy. The next day, Chris, who has been relegated by his shrewish wife Adele (Rosalind Ivan) to practice his painting in the bathroom, grows depressed when she berates him for his lack of talent, and points out that her first husband died bravely as a detective. Frustrated, Chris sends Kitty a note asking to see her again. Kitty’s idler boyfriend Johnny (Dan Duryea), the man who beat her, also believes Chris is rich and pressures Kitty to make a date with him. When they meet, Kitty claims she is an actress who finds it hard to make ends meet and asks Chris if she could pose for him, suggesting he rent a studio in which he could paint and she might live. When Chris admits he is married, Kitty feigns shock, but convinces him to rent the studio. Unsure how to provide the money for the studio, Chris considers stealing it from his employer, but asks Hogarth for a loan instead. Later at home, as Adele’s nagging continues, Chris steals some of the security bonds left by her deceased first husband. Johnny helps Kitty select a lavish studio and demands she ask Chris for $1,000 more. When Chris unexpectedly visits the studio and finds Johnny with Kitty, she introduces him as a friend’s boyfriend, but Chris’s suspicions are aroused..….  Read full summary at American Film Institute, AFI. Release Date: 28 December 1945 (USA) 3 February 1947 (Spain) Spanish title: Perversidad IMDb Rating: 7.9

I submit this notes to Rich’s Meme Crimes of the Century at Past Offences. The year under review this month is #1945. 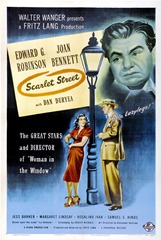 Georges De La Fouchardiere’s novel was published in America as The Poor Sap (New York, 1931). According to modern sources, director Ernst Lubitsch purchased the rights to De La Fouchardiere’s novel, first, but was unable to produce a script acceptable to the PCA. By contrast, Dudley Nichols’ script for Scarlet Street had little difficulty with the PCA. Scarlet Street was the first film produced by Diana Productions, an independent company established by producer Walter Wanger, his wife actress Joan Bennett and director Fritz Lang.

Modern sources indicate that Austrian-American essayist Ludwig Bemelmans was brought in to work on an adaptation of La chienne for Wanger and Lang, but there is no confirmation of his contribution. Production notes indicate that the thirteen paintings in the film done by “Christopher Cross,” including the portrait of Joan Bennett as “Kitty,” were painted by artist John Decker. Several modern sources claim that conflict arouse between Lang and Wanger after Wanger took over the film in post-production and made several cuts based on Universal’s marketing staff recommendations.

According to information contained in the file on the film in the MPAA/PCA Collection at the AMPAS Library, the film was banned by the state of New York for excessive violence and immorality,……  Wanger met with the New York censor, Dr. Irwin Conroe, and in late Jan 1946, with only minor editorial cuts …., the film was approved. Similar eliminations were made in other states. In Feb 1946, Atlanta and Milwaukee banned the film. Universal Pictures and Diana Productions sued the city of Atlanta, claiming that the state censor did not have the authority to ban the film, and that only the entire state Board of Censors, who tied on their vote, could make such a decision. Georgia’s lower court demurred judgment in Apr 1946, while the film was still in its first run. The city of Atlanta appealed to the state Supreme Court, who reversed the demurrer on a legal technicality in Sep 1946.

Georges de la Fouchardiere’s novel was first filmed in France in 1931. Titled La chienne, the picture was directed by Jean Renoir and starred Janie Mareze and Michel Simon. In 1995, Matthew Bernstein wrote in Cinema Journal: ‘The film is a dense, well-structured film noir and has been analyzed and interpreted numerous times.’ (Wikipedia)

Fritz Lang’s Scarlet Street is (along with the roughly contemporary The Woman in the Window, also starring Joan Bennett, Edward G. Robinson and Dan Duryea) one of the most significant and influential examples of film noir from the mid-1940s. ….. What makes Scarlet Street most remarkable, though, for a 1940s film is not this list of moral transgressions, but the fact that it disobeys one of the Production Code’s chief rules: that no serious crime should ever go unpunished. …… The film dodges some of the ramifications of its radical narrative conclusion by having a newspaperman remark ….. that a person’s conscience can punish him far more strictly than any judge….. (Brian McDonnell)

I’m really glad to have had the opportunity to watch this film that I hardly knew and it’s worth seeing. Particularly I would like to highlight the narrative structure and its cinematography. It is certainly amongst the best films by Fritz Lang.