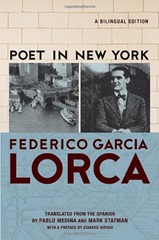 Newly translated for the first time in ten years, Federico García Lorca’s Poet in New York is an astonishing depiction of a tumultuous metropolis that changed the course of poetic expression in both Spain and the Americas. Written during Federico García Lorca’s nine months as a student at Columbia University at the beginning of the Great Depression, Poet in New York is widely considered one of the most important books Lorca ever produced. This enduring and influential collection offers us a New York City populated with poverty, racism, social turbulence, and solitude—a New York intoxicating in its vitality and devastating beauty.

After the tragedy of September 11, 2001, poets Pablo Medina and Mark Statman returned to this seventy-year-old work and were struck by how closely it spoke to the atmosphere of New York after the World Trade Center crumbled. They were compelled to create a new English version of Poet in New York—translating the poems with reverence and irreverence, caution and wildness, humility and nerve. They translate Lorca’s words with a contemporary poet’s eye, which allows their work to uphold his surrealistic technique, mesmerizing complexity, and fierce emotion, unlike any other translation to date.

An excellent introduction to one of the most significant figures in twentieth century poetry, Poet in New York is a defining work of modern literature and this new bilingual edition is an exciting exposition of one American city that continues to have the ability to change our perspective on the world around us.

“Take This Waltz” is a song by Canadian singer-songwriter Leonard Cohen, originally released as part the 1986 Federico García Lorca tribute album Poets in New York (Poetas en Nueva York) and as a single. The song was later included in Cohen’s 1988 studio album I’m Your Man, in slightly re-arranged version (with addition of violin and Jennifer Warnes’s duet vocals, both absent from the 1986 version). The song’s lyrics are a loose translation, into English, of the poem “Pequeño vals vienés” by the Spanish poet Federico García Lorca(one of Cohen’s favourite poets). The poem was first published in Lorca’s seminal book Poeta en Nueva York.

Below is the English version of Federico García Lorca’s poem to commemorate the 118th anniversary of his birth.

In Vienna there are ten little girls,
a shoulder for death to cry on,
and a forest of dried pigeons.
There is a fragment of the morning
in the museum of winter frost.
There is a thousand-windowed dance hall.

In Vienna there are four mirrors
in which your mouth and the echoes play.
There is a death for piano
that paints little boys blue.
There are beggars on the roof.
There are fresh garlands of tears.

Because I love you, I love you, my love,
in the attic where the children play,
dreaming ancient lights of Hungary
through the noise, the balmy afternoon,
seeing sheep and irises of snow
through the dark silence of your forehead.

In Vienna I will dance with you
in a costume with
a river’s head.
See how the hyacinths line my banks!
I will leave my mouth between your legs,
my soul in a photographs and lilies,
and in the dark wake of your footsteps,
my love, my love, I want to leave
violin and grave, the ribbons of the waltz.

DE / 133 min (restored) | 152 min (Copy with French titles at Brussels Musée du Cinéma) | 131 min (original) | 110 min (VHS) / silent / b&w / Nero-Film AG Dir: G W Pabst Pro:
Seymour Nebenzahl, George C. Horsetzky Scr: Ladislaus Vajda, adapted from two plays (Die Büchse der Pandora and Erdgeist) by Frank Wedekind Cine: Günther Krampf Cast: Louise Brooks (Lulu), Fritz Kortner (Dr. Schön), Franz Lederer (Alwa Schön, his son), Carl Goetz (Schigolch, an old man), Krafft-Raschig (Rodrigo Quast, a strongman), Alice Roberts (Countess Geschwitz), Daisy D’Ora (Dr. Schön’s fiancée), Gustav Diessl (Jack the Ripper), Michael von Newlinsky (Marquis Casti-Piani), Siegfried Arno (Stage Manager), Hans Casparius (The chef) Original Language Title: Die Büchse der Pandora Plot Summary: Lulu is a beautiful young Jewish woman who can seemingly work her charms on all of the men around her. She is currently being kept by the rich financier Dr. Ludwig Schon. She is just a plaything however and he is engaged to be married to Charlotte, a woman of his own class. He arranges for Lulu to appear in his son Alwa’s musical revue and he too falls for all of her charms. When Dr. Schon and his fiancée go to the theater, Lulu ensures that he is put in a compromising situation and the elder Schon feels he now must marry her, knowing full well it will ruin his reputation. On his wedding day, Dr. Schon reaches his breaking. His actions cost him his life however and Lulu is convicted of manslaughter. She escapes with the help of her old cronies but together they begin a downward spiral. Written by garykmcd. (Source:IMDB) Release Date: 30 January 1929 (Berlin premiere) Spanish title: La caja de Pandora IMDb Rating: 8.0

I submit these notes to Rich’s Meme Crimes of the Century at Past Offences. The year under review this month is #1929.

“What counts is the image. So I would still claim that the creator of the film is much more the director than the author of the scenario or the actors.” – G. W. Pabst

Georg Wilhelm Pabst (1885–1967) was the third member of the great Weimar directorial triumvirate, along with Fritz Lang and F. W. Murnau. In some ways he was the most elusive and mysterious of the three. Murnau was haunted by whatever demons went along with being homosexual in an uncongenial era. Pabst’s fellow Austrian, Lang, seemed to flirt with Fascism—his intellectual instincts were Teutonic, his wife was a Nazi, and he was offered control of the Reich’s film industry—before deciding to go west and ultimately winding up in Hollywood (where he became a practicing democrat, although reports of his tyrannical relations with coworkers probably would disqualify him from canonization). Pabst was a horse of a different color altogether, or, perhaps more correctly, several different colors. While Lang could only imagine New York for Metropolis, Pabst spent a few youthful years here. He came to film directing rather late, in 1923, but he had made several successful movies (Der Schatz, Die Freudlose Gasse, Geheimnisse Einer Seele, Die Liebe der Jeanne Ney) by the time of Die Buchse der Pandora (Pandora’s Box) in 1928.

Then a kind of intellectual wanderlust set in. He made a “Mountain film,” The White Hell of Pitz Palu, starring Leni Riefenstahl. He seemed to tack to the left with the antiwar Westfront 1918, Bertolt Brecht’s Threepenny Opera, and the pro-proletariat Kameradschaft. When the Nazis came to power he, like Lang, went to France and then briefly to America (where he made A Modern Hero). After that, he returned to France and then went back to Germany at the outbreak of World War II, where he made two films under the Nazis. Following the war, he seemed to atone with several anti-Nazi films. As critic Lotte Eisner said, “He is full of contradictions.” Will the real G. W. Pabst please stand up? In his defense, he seems to have been a much nicer guy and more gracious colleague than Lang.

Pandora’s Box ….. was adapted from two plays by Frank Wedekind, and made the American Louise Brooks briefly into an international star. Pabst had been on the brink of signing the little-known but more-knowing Marlene Dietrich to play Lulu, but opted at the last moment for the younger and more innocent-looking Brooks. (Dietrich would have sweet revenge a year later in landing the part of Lola in Josef von Sternberg’s The Blue Angel and signing a long-term contract with Paramount, the very studio Brooks had ditched for Pabst.) The film is less conventionally Expressionistic and melodramatic and more fluid than Pabst’s earlier work. Where Murnau is a poet and Lang a mythologist, Pabst is mostly concerned with contemporary slants on psychology and sexuality. Taken in this sense, the film was extremely modern and remains so, but the audiences of 1928 were not ready for the film’s boldness and frankness, even in few-holds-barred Weimar Berlin. Interestingly, the film’s production coincided with Erich von Stroheim’s madly unsuccessful attempt to complete a similarly erotic story with Gloria Swanson, Queen Kelly.

In her wonderful and intelligent book Lulu in Hollywood, Brooks praises Pabst for his willingness to confront reality, “his truthful picture of this world of pleasure.” (She was to make one additional picture with him, Das Tagebuch einer Verlorenen [Diary of a Lost Girl]). He seems to have recognized a unique vitality in her, or, as she once said, “It was clever of Pabst to know…that I possessed the tramp essence of Lulu.” The great Jean Renoir wrote that Pabst “knows how, better than anyone else, to direct actors. His characters emerge like his own children, created from fragments of his own heart and mind.” If my friend Russell Merritt is correct in calling Brooks’ Lulu a “narcissistic chameleon,” this may help to explain Pabst’s own chameleon-like qualities.