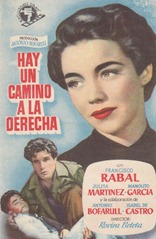 Last night Begoña and I had the opportunity to watch on TV2  Hay un camino a la derecha (There is a Path to the Right), a Spanish 1953 film directed by Francisco Rovira Beleta. See my previous posts Forgotten Films: Spanish Detective Fiction and Spanish Film Noir from 1950 to 1965 and Spanish Detective and Mystery Films (Film Noir) Between 1950 to 1965. The film is stylistically more related to Italian Neorealism than to detective fiction or film noir. It tells the story of Miguel, a quick-tempered sailor, who is fired from his job and hardly finds another one to support his family as a harbour depot watchman. Unsatisfied, he will plan a robbery.

The film premiered at San Sebastian Film Festival, now in its 64th year. Their two main interpreters, Francisco Rabal and Julita Martinez, were awarded with the prize to the best actor and to the best actress, respectively. The film was shot between August 1, 1952 and January 1, 1953. It was mainly shot at outdoor locations in Barcelona, like the port area, Barcelona’s Barrio Chino (the city red-light district), the slum area of Somorrostro and its beach, Angli street and the Hospital Clínico. A famous tenor of the times, Antonio Bofarull, who was also the owner of a renowned restaurant called “Los Caracoles”, was the founder in 1948 of a film production company named Titan, where he became accustomed to performing secondary roles in its films. His influence in this film was felt on the screenplay. According to Rovira Beleta, the pastiche at the end and the early scenes, were not part of his original film idea. The film should have ended with the burial and should have begun with the layoff of Francisco Rabal as a sailor of a merchant ship. Everything else was added by the producer. The film was commercially released in Barcelona on February 22, 1954 and in Madrid on 7 May the same year, with a great reception from the public. (Source: Wikipedia.es).

In my view a highly interesting film that it’s worth to remember. A good example of a film industry that could have been developed, but got frustrated.