The exhibition Impressionists and Moderns Masterpieces from the Phillips Collection can still be seen in Caixa Forum Madrid  Paseo del Prado, 36, until 23 October, 2016. Recently, Begoña and I went to visit it. 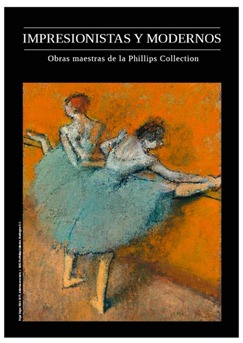 Impressionist and Moderns. Masterpieces from The Phillips Collection features a selection of paintings from the holdings of what was the first museum of modern art in the United States. This eminent institution, which opened its doors to the public in 1921, was planned by its founder, Duncan Phillips, to be “a small, intimate museum combined with an experiment station“. Today, The Phillips Collection is renowned throughout the world for its magnificent holdings featuring art from the last two centuries.

This exceptional exhibition brings together sixty works by forty-four European and American artists. Divided into six thematic areas, arranged chronologically, the show reflects the evolution of modern painting from the nineteenth to the mid-twentieth century. The opening section features a selection of works by leading artists from the early nineteenth-century, great masters who revolutionised European painting, such as Ingres, Delacroix, Courbet and Manet, in close dialogue with great Impressionist painters like Van Gogh, Cezanne, Degas, Monet and Sisley. A central place is given in the exhibition to modern masters who shaped the artistic vision of the twentieth century, including Bonnard, Braque, Gris, Kandinsky, Kokoschka, Matisse, Modigliani, Picasso, Soutine and Vuillard, along with the Americans Arthur Dove and Georgia O’Keeffe. Finally, the show is rounded off by several seminal works from the postwar period by American and European artists such as de Staël, Diebenkorn, Gottlieb, Guston and Rothko, artists who helped to create an entirely new experience for spectators. The Phillips Collection differs from other institutions that were established between the wars in the last century by the fact that its founder, Duncan Phillips (1886-1966), was interested in the connections between works of art of the past and the present. From a young age, Phillips always sought to support emerging artists, acquiring works based on their merits, not because they illustrated particular trends or were by famous names. He always saw the idea of modernity as a dialogue between past and present, without geographic, national or historic restrictions.

Through its acquisitions and exhibition programmes, The Phillips Collection has occupied a prominent place in American cultural life since the museum first opened to the public in 1921. Phillips, who was in many ways a pioneer, was passionate about the art of his time and, trusting in his own instinct to detect talent and promising up-and-coming artists, built up an art collection that achieved enormous international prestige based on an “overall vision”. (Source: Press release)

2 thoughts on “OT: Impressionists and Moderns Masterpieces from the Phillips Collection”