Alan Furst (born February 20, 1941) is an American author of historical spy novels. Furst has been called “an heir to the tradition of Eric Ambler and Graham Greene,” whom he cites along with Joseph Roth and Arthur Koestler as important influences. He is especially noted for his successful evocations of Eastern European peoples and places during the period from 1933 to 1944. 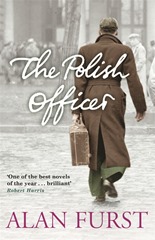 I’m currently reading The Polish Officer and I couldn’t help to bring here Norman Price’s summary at Crime Scraps Review, who  encouraged me to read it.

The Polish Officer was written back in 1995 but has been reissued  along with other Alan Furst books last year. Furst who has lived in France for long periods and travelled widely in Eastern Europe writes books [if this novel is an example] that are exciting spy thrillers, history lessons and a lot more.

In The Polish Officer he manages to create interesting characters, give us an account of the first months of the Second World War, and still keep the action going at breakneck speed. He writes well in an episodic style and tells the story of Captain Alexander de Milja, a cartographer in the Polish Intelligence service. The reader follows de Milja as he escapes Warsaw in 1939 transporting Poland’s gold reserves to safety, and then on to  Paris and the forests of the Polish -Ukrainian border where he fights with a partisan group. In France he assumes the identities of a Russian émigré, and then a Slovak of German ethnicity as he runs a resistance organization in France keeping one step ahead of the Gestapo.

It is a story of tragedy, and the temporary triumph of barbarity but also of loyalty and friendship in a time of incredible stress.

And so, the story began:

In Poland, on the night of 11 September 1939, Wehrmacht scout and commando units – elements of Kuechler’s Third Army Corps – moved silently around the defences of Novy Dvor, crossed the Vistula over the partly demolished Jablonka Bridge, and attempted to capture the Warsaw Telephone Exchange at the northern edge of the city. Meeting unexpected, and stubborn resistance , they retreated along Sowacki Street and established positions on the roof and in the lobby of the Hotel Franconia, called for dive-bomber attacks on the exchange building, and settled in to wait for the light of dawn.