Starring multi-award winning actress Brenda Blethyn (Secrets & Lies; Little Voice) as DCI Vera Stanhope. Based on the bestselling Inspector Stanhope books by renowned writer Ann Cleeves, Vera and her team are faced with a series of daunting challenges. From delving into the unsettling private life of an old colleague, attempting to break through the code of secrecy in the army, to coping with the emotional impact on a family torn apart by addiction, each enthralling story is enhanced by captivating performances of this shambolic yet brilliant detective in action. Combined with beautifully shot landscapes and atmospheric production, each film creates a haunting backdrop for Vera’s inner turmoil as she discovers hidden truths about her own past, which threaten to change her life forever. (Source: You Tube) 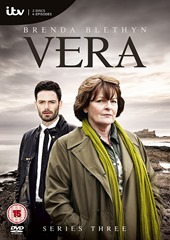 I’m currently watching regularly every Sunday night, on Spanish TV 2, Vera, a British crime drama TV series based on novels of the same name, written by crime writer Ann Cleeves.and starring Brenda Blethyn as the principal character, DCI Vera Stanhope. Six series have been broadcasted to date in the UK and a seventh series is set to air in 2017, according to Wikipedia. Last night Begoña and I had the chance to watch “A Certain Samaritan” (Season 2, Episode 3). I have read several books by Ann Cleeves so far but none in her Vera Stanhope series. Even though I have The Moth Catcher, the seventh book in the series, on my TBR pile and maybe the time has come to read it. Moreover it was among Norman Price’s favourite reads in 2016. (Source: Euro Crime) For me that’s always a guarantee. Stay tuned.