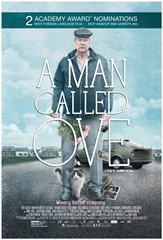 The film is based on the bestselling book by Fredrik Backman, which has been published in more than 30 countries worldwide and tells a heartfelt, poetic and humorous story about a grumpy old man who has given up on everyone including himself. It was chosen by The Academy of Motion Picture Arts and Sciences as one of the five nominees to compete in the Best Foreign Language Film category at 89th Annual Academy Awards. Furthermore the film had also been nominated in the best Makeup and Hairstyle category. In January 2016 the film took home 3 Guldbagge awards (the swedish Oscars), including the Best Actor Award for Rolf Lassgård, and in December the film won the prize as Best European Comedy at the European Film Awards in Wroclaw, Poland.

A few days ago, Begoña and I had the opportunity to watch this film. To tell the truth it disappointed me. While it is true that it succeeded in getting me smile several times, I found the film overall too soft and sentimental, and with an ending a bit corny, for my taste. In many aspects, It reminded me very much of Clint Eastwood’s Gran Torino (2008), a much better film in my view.

Director’s Statement: A Man Called Ove is a universal story that revolves around Ove who we first get to know as the neighbourhood’s grumpy old man. The core of the story is the unexpected friendship between pregnant Parvaneh who recently has moved in opposite Ove’s with her husband and two children. Ove has recently lost his beloved wife and along the story Parvaneh succeeds in revealing that Ove has a heart-breaking story with his wife Sonja. For Ove there was nothing before Sonja and there’s nothing after Sonja. Ove is shaped by hard work and has lost his mother at age seven. From his father he learned that life is all about hard work, the differences between right and wrong, and the only car you should drive is a Saab. In the film we follow Ove in the present were he looks over the neighbourhood with an iron fist. Through flashbacks Ove’s journey trough life emerges and his heart-breaking love story with his wife Sonja. The love Ove has for Sonja makes him determined to join his wife and to try to commit suicide. However, this turns out to be more difficult than he thought, because he always gets interrupted by other people who need him. We also learn that behind Ove’s grumpiness lives a heart-warming man with a passion for justice. As a character, Ove is a man that many of us can recognise around themselves, like your father, grandfather, brother or uncle. Ove’s way of looking at people and situations around him provides both comic relief as well as a drama. I want to focus more on the drama part but Ove’s way of looking at things gives the story laughter. His friendship with the neighbour Parvaneh grows stronger and slowly Ove starts seeing himself so close to the family that the children call him grandfather. In the flashbacks we see the love story between Ove and his Sonja, were we, as cinematic references, look at My Life as a Dog and Forrest Gump. Other references I have are About  Schmidt and As Good As It Gets. This story should touch people’s hearts in both a feel-good, humorous as well as a dramatic way. This is a story about a life; a journey between laughter and tears, simple as life itself is. (Source: European Film Academy)

Biography: Hannes Holm, born 1962, is a well-known and acclaimed Swedish director, actor and screenwriter. He got his first film role in Birgitta Svensson’s 1981 feature film Interrail. Then followed a series of TV series in the 80s which he generally created along with his companion Måns Herngren. They wrote and directed the popular satire series S * M * A * S * H with Svante Grundberg, Felix Herngren and Peter Wahlbeck. In 1987 Hannes Holm created the cult children’s series The Olsson Brothers. In 1995, One in a Million with Tomas von Brömsen and Gösta Ekman became his first feature film, together with Måns Herngren. This was a huge success, followed by Adam & Eve (1997), The Reunion (2002) and Every Other Week (2006), to name but a few. In 2007 Hannes Holm directed Wonderful and Loved by All, based on Martina Haag’s best-selling novel with the same title. He also wrote and directed Behind Blue Skies (2010), an original feature inspired by the true story of one of the most scandalised drug stories in Swedish crime history, the so-called “Sandhamn league” who produced drugs in the Stockholm archipelago during the 70s. (Source: European Film Academy)