This book is my contribution this month to A Book for Maxine at Petrona Remebered. With my special gratitude to Margot Kinberg for the opportunity to pick this book to honour the memory of Maxine Clarke. For those of you who do not already know who Maxine was, let me copy the first lines at Petrona Remembered – About:

For many years Maxine Clarke reviewed, discussed and advocated on behalf of intelligent crime fiction. She enjoyed crime and mystery novels with nuanced characters and intriguing plots and particularly enjoyed those novels which explore a social issue, political idea or troubling aspect of the human condition. She was well known for loving Scandinavian crime fiction long before it was fashionable but her favourite authors were a varied and somewhat eclectic mix; a fact indicative of her willingness to take each book on its own merits.

Her online home was her blog Petrona but she contributed also to Euro Crime and was a top 500 reviewer at Amazon UK. Maxine nurtured a community of crime fiction lovers, many of whom hang out at the Friend Feed Crime and Mystery Fiction  Room she founded, by commenting on dozens of blogs (especially the sites of fledgeling bloggers who she encouraged and welcomed with an open heart and mind), trying out new authors, fairly reviewing the books she read and individually recommending the books she thought her friends would like (and often sending the actual books to readers dotted around the globe).

Maxine died after a long battle with illness in December 2012. Here her friends in the crime fiction community have created this site in honour of both her memory and in an attempt to keep alive the kind of community spirit she engendered.  We know she’d hate having a fuss made of her but we hope she would agree that if we are determined to have a tribute then it is right it take the form of a continued conversation about and celebration of intelligent crime fiction from around the world. 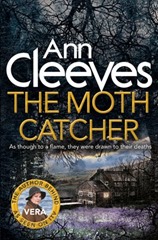 Synopsis: Life seems perfect in Valley Farm, a quiet community in Northumberland. Then a shocking discovery shatters the silence. The owners of a big country house have employed a house-sitter, a young ecologist named Patrick, to look after the place while they’re away. But Patrick is found dead by the side of the lane into the valley – a beautiful, lonely place to die.

DI Vera Stanhope arrives on the scene, with her detectives Holly and Joe. When they look round the attic of the big house – where Patrick has a flat – she finds the body of a second man. All the two victims have in common is a fascination with moths – catching these beautiful, rare creatures.

Those who live in the Valley Farm development have secrets too: Annie and Sam’s daughter is due to be released from prison any day; Nigel watches, silently, every day, from his window. As Vera is drawn into the claustrophobic world of this increasingly strange community, she realizes that there may be deadly secrets trapped here . . .

My take: The Moth Catcher revolves around the mysterious murders of Partick Randle and Martin Benton. Patrick’s body was discovered by chance in the ditch on a road, and DI Vera Stenhope of the Northumbria Police Force and her team are called to investigate. Shortly after the body of a second victim, Martin Benton, shows up in the apartment Patrick was occupying at the Carswells mansion in Carswell Hall. Patrick was house-sitting while the Carswells were off in Australia, visiting their son. The odd thing about this case is that it doesn’t seem to be any connection between both victims until, later on, it is discovered that both had a common interest on insects, more specifically on nocturnal butterflies, moths. But, what can it be so dangerous in such an innocent hobby? Soon the investigation will begin to be heading in two separate directions. On the one hand seeking into the life of the victims any clue that may shed light on what has happened. On the other hand questioning the neighbours in the area to find out  whether they had seen anything suspicious that particular day or during the previous days. Although the manor house was in a relatively isolated area, somewhere down the road there was an upscale development housing an eccentric bunch of people who called themselves ‘retired hedonists’, on which soon Vera is going to focus part of her attention.

I was particularly interested in this series after watching several episodes of Vera on TV. I knew Ann Cleeves  after reading some of her books in the Shetland series, but I have the impression that my preferences are heading more towards Vera Stanhope. Although I must admit that I have also enjoyed the Jimmy Perez books that I have read. It does not bother me to begin reading a series by its end, by one of its last books as in this case. Those who have followed me on this blog know my view. Sometimes I don’t hesitate to start reading first one of the last instalments iin a series, to get an initial impression about it. Later I will have time to follow reading the rest of books in chronological order, if that’s what I want, and find out how the author has gotten there. I have to admit that this book has not disappointed me, at all, and I look forward to reading the rest of the books in the series. I fully agree with Jim Napier, when he writes in his review here below at Reviewing the Evidence:

Cleeves has a keen ear for rural dialogue, and a real gift for providing layered portraits of each of her characters, sharply delineated yet nicely nuanced, and she skillfully exploits these talents in painting a vivid picture of country life. Structure and pace are also hallmarks of her novels, and dominating the whole is a clever plot with unexpected twists and masterful misdirection that will keep readers engaged until the final page. All in all, an excellent read.

About the author: Ann Cleeves is the author behind ITV’s Vera and BBC One’s Shetland. She has written over twenty-five novels, and is the creator of detectives Vera Stanhope and Jimmy Perez – characters loved both on screen and in print. Ann’s DI Vera Stanhope series of books is set in Northumberland and features the well loved detective along with her partner Joe Ashworth. Ann’s Shetland series bring us DI Jimmy Perez, investigating in the mysterious, dark, and beautiful Shetland Islands…

Ann grew up in the country, first in Herefordshire, then in North Devon. Her father was a village school teacher. After dropping out of university she took a number of temporary jobs – child care officer, women’s refuge leader, bird observatory cook, auxiliary coastguard – before going back to college and training to be a probation officer. While she was cooking in the Bird Observatory on Fair Isle, she met her husband Tim, a visiting ornithologist. Soon after they married, Tim was appointed as warden of Hilbre, a tiny tidal island nature reserve in the Dee Estuary. They were the only residents, there was no mains electricity or water and access to the mainland was at low tide across the shore. If a person’s not heavily into birds – and Ann isn’t – there’s not much to do on Hilbre and that was when she started writing. Her first series of crime novels features the elderly naturalist, George Palmer-Jones. A couple of these books are seriously dreadful. In 1987 Tim, Ann and their two daughters moved to Northumberland and the north east provides the inspiration for many of her subsequent titles. The girls have both taken up with Geordie lads. In the autumn of 2006, Ann and Tim finally achieved their ambition of moving back to the North East. For the National Year of Reading, Ann was made reader-in-residence for three library authorities. It came as a revelation that it was possible to get paid for talking to readers about books! She went on to set up reading groups in prisons as part of the Inside Books project, became Cheltenham Literature Festival’s first reader-in-residence and still enjoys working with libraries.

In 2006 Ann was awarded the Duncan Lawrie Dagger (CWA Gold Dagger) for Best Crime Novel, for Raven Black, the first book in her Shetland series. In 2012 she was inducted into the CWA Crime Thriller Awards Hall of Fame. Ann lives in North Tyneside. Ann Cleeves will be presented with the CWA Diamond Dagger at the CWA’s Dagger Awards ceremony in London on 26 October 2017. Previous winners of the CWA Diamond Dagger include P.D. James, John Le Carre, Dick Francis, Ruth Rendell, Lee Child, and Ian Rankin.