ES–GB–DE  / 110 min / Color / A Contracorriente Films, Diagonal TV, Zephyr Films, ONE TWO Films, Green Films Dir: Isabel Coixet Pro: Jaume Banacolocha, Joan Bas, Adolfo Blanco, Sol Bondy, Chris Curling, Jamila Wenske Scr: Isabel Coixet based on a novel by Penelope Fitzgerald Cin: Jean-Claude Larrieu Mus: Alfonso de Vilallonga Cast: Emily Mortimer, Patricia Clarkson, Bill Nighy, Honor Kneafsey, James Lance Synopsis: The Bookshop is a sumptuous cinematic adaptation which celebrates Bibliophilia itself. Based on Penelope Fitzgerald’s novel of the same name; The Bookshop is set in 1959, Florence Green (Emily Mortimer), a free spirited widow, puts grief behind her and risks everything to open up a bookshop – the first such shop in the sleepy seaside town of Hardborough, England. Fighting damp, cold and considerable local apathy she struggles to establish herself but soon her fortunes change for the better. By exposing the narrow minded local townsfolk to the best literature of the day including Nabokov’s scandalising Lolita and Ray Bradbury’s Fahrenheit 451, she opens their eyes thereby causing a cultural awakening in a town which has not changed for centuries. Her activities bring her a kindred spirit and ally in the figure of Mr Brundish (Bill Nighy) who is himself sick of the town’s stale atmosphere. But this mini social revolution soon brings her fierce enemies: she invites the hostility of the town’s less prosperous shopkeepers and also crosses Mrs. Gamart (Patricia Clarkson), Hardborough’s vengeful, embittered alpha female who is herself a wannabe doyenne of the local arts scene. When Florence refuses to bend to Gamart’s will, they begin a struggle not just for the bookshop but for the very heart and soul of the town. (Source: Celsius entertainment) Release Dates: 21 October 2017 (Valladolid International Film Festival); 10 November 2017 (Spain) (Spanish title: ‎‎La librería) IMDb Rating: 6.5. Isabel Coixet’s screenplay, won the Frankfurt Book Fair prize for Best International Literary Adaptation 2017. 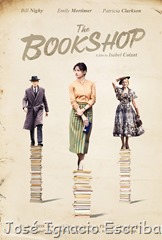 Isabel Coixet commented: “The Bookshop is the story of a woman whose light, innocence and perseverance pose a threat to the powers that be in a small town plagued with petty schemes and darkness. This is a film about passion, for books and for life.”

This week Begoña and I had occasion to go and see Isabel Coixet’s latest film The Bookshop. It may not be exempt of some defects, but overall I quite enjoyed this film and I truly believe that it is well worth seeing. Particularly if, like me, you are a book lover.

About the filmmaker: Isabel Coixet is one of the most prolific female film directors of contemporary Spain, having directed seven feature-length films since the beginning of her film career in 1988. Her distinct visual style secure the “multifaceted (she directs, writes, produces and acts)” filmmaker’s status as a “auteur”. Isabel started filming when she was given a 8mm camera on the occasion of her First Communion and made her debut in 1988 as a scriptwriter and director in Demasiado Viejo Para Morir Joven. Foreign Films and English features as Things I Never Told You (1996), the international success My life Without You (2003) or Paris, je t’aime (2006) followed over the years. Her work has been honoured with multiple international awards including 5 Goya awards (best documentary for Escuchando al juez Garzón (2011), best documentary for Invisibles (2007), Best Director & Best Screenplay for The Secret Life of Words (2005) and Best Screenplay for My Life without Me (2003). She was also awarded the Lina Mangiacapre Award at Venice Film Festival for the The Secret Life of Words (2005).

The Bookshop film review at The Hollywood Reporter

Begoña and I visited this week the exhibition William Morris and Company: The Arts and Crafts Movement in Great Britain, at the Fundación Juan March exhibition hall in  Castelló 77, Madrid. This exhibition offers an unprecedented opportunity to explore the many faces of the designer, craftsman, retailer, poet, and social agitator William Morris (1834-1896), as well as those of the main figures in the Arts and Crafts movement. This new generation of architects, designers, artists and craftsmen, shared a passionate concern for the harmful effects of industrialization on society, working conditions and traditional British crafts.

Additional details can be found here.

For those who, like me, have a limited knowledge on the figure of William Morris further details are available at Wikipedia here, 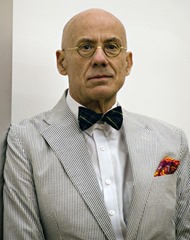 The jury has considered that ‘James Ellroy, for decades and one novel after the other, reinvents and expands the edges of crime fiction towards historical, social and stylistic grounds that are both personal and ambitious. Ellroy is talent, obsession, craft, work and passion. Choral thrillers, sophisticated machinery, as well as torrential, fighting between boxers of dry and accurate blows, exploring the USA imaginary, our sins and the sins of our parents, the violent rubbish of political and economic power: palaces, alleys and sewers.’ (My free translation)

The award ceremony will be held on 1 February in the context of the Crime Fiction Festival BCNegra, which will take place in Barcelona between 29 January and 4 February.

I know it’s a bit long but hopefully worthwhile