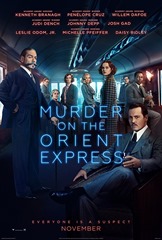 During this week Begoña and I went to see the remake directed by Kenneth Branagh of Sidney Lumet’s 1974 film Murder on the Orient Express, based on the homonymous novel by Agatha Christie. One might wonder whether this remake was necessary. I guess Michael Green, the screenwriter, answers to this question when he says: ‘We all had the same goal: we wanted to bring it into the modern world without changing what’s essential to it, without altering its soul, so that a contemporary audience can experience it, believe it and be thrilled by it.’ And this is enough for my taste, being myself a great enthusiast of Agatha Christie’s novels. I honestly believe that the film is well made and, although it’s been a long time since I saw Sidney Lumet’s version, I think this new adaptation stands well on a par with the 1974 film. In my view, Sergio at Tipping my Fedora explains it better than I in his blog here.

Production Notes: Agatha Christie’s classic mystery, with its richly drawn characters confined to a luxurious passenger train, taut scenes and crisp dialogue, has fixated audiences since the novel’s debut in 1934. The Times of London wrote upon its publishing, “The little grey cells solve once more the seemingly insoluble. Mrs. Christie makes an improbable tale very real, and keeps her readers enthralled and guessing to the end.”

Readers have been captivated with the mystery, the crime, the story, and the character of Hercule Poirot for generations. The allure of the Orient Express was magnified by Christie’s work, and travellers continue to flock to discover the illustrious compartments and service to this day. Room 411 in the Pera Palace Hotel in Istanbul, where Christie allegedly wrote the novel, also remains a popular destination site. There are societies and clubs the world over dedicated to rediscovering Christie’s mysteries, particularly those featuring Hercule Poirot. Why the endless fascination? “Agatha Christie is expert at bringing depth (with economy) to the observation of characters, making them distinct and colourful, but also believable. I think she enjoys the literary dazzle of that, but in the Orient Express, you also have glamour. You have snow. You have elegance and the golden age of romance in travel. And, of course, you have a murder,” says Kenneth Branagh. This film introduces another generation of moviegoers to an enthralling new interpretation of one of the most beloved mysteries of all time. A “who’s who” of celebrated actors and an acclaimed production team up for the journey. With everything Agatha Christie, it all starts with the story. But to make a film, of course, you then need to get the rights to that story – and for producers Mark Gordon and Simon Kinberg, that proved to be a near-five-year-long journey. Initially, both men had enquired about the rights separately but soon decided that teaming up would be the best approach. Gordon and Kinberg subsequently partnered with Ridley Scott. Now it was time to commission a script… As a huge admirer of Agatha Christie and long-time collaborator with producer Ridley Scott, screenwriter Michael Green (Logan, Blade Runner 2049) was thrilled when he was asked to bring this fabulous story to the screen. Producer Scott, a Christie fan himself, and an admirer of Sidney Lumet’s 1974 version of Murder on the Orient Express, had leapt at the chance to re-explore the book, seeing it a wonderful opportunity to present the author’s work to a modern-day audience. Green agrees. “They’re incredible stories with characters that you want to see more and more of,” says Green. “And if you’re lucky enough to catch an Agatha Christie book or play at the right age, it’s going to stay with you and remain charming in your memory.”

But even as a Christie fan, one story stands out for Green: “I’m very fortunate that my favourite Agatha Christie is, hands down, Murder on the Orient Express. It not only features Poirot, my favourite character of hers, but it’s a story that has a surprising ending, along with the fascinating people you meet along the way. The setting is grand and everything about it makes it stand apart in my memory as the special one.”

Green met with the Christie estate to discuss the project: “We all had the same goal: we wanted to bring it into the modern world without changing what’s essential to it, without altering its soul, so that a contemporary audience can experience it, believe it and be thrilled by it.” (Source: 20th Century Fox)

About Agatha Christie: Agatha Mary Clarissa Miller was born on 15 September 1890 in Torquay, in the south west of England, to an English mother and an American father. She taught herself to read at five years old, and began writing her own poems from a young age. Her education was a combination of informal tutoring at home (mainly by her parents) and teaching establishments in Paris, where she became an accomplished opera singer and pianist. By the age of 18 she was amusing herself with writing short stories, some of which were published in much revised form in the 1930s.

In 1914 Christie became a nurse in the Voluntary Aid Detachment of the Red Cross Hospital in Torquay, and when the hospital opened a dispensary, she accepted an offer to work there and completed the examination of the Society of Apothecaries. This sparked a lifelong interest in the use of poisons, which made a huge contribution to her first novel The Mysterious Affair at Styles. The murderer’s use of poison was so well described that Christie received an unprecedented honour for a writer of fiction, a review in the Pharmaceutical Journal.

She was spurred on to write a detective story following a challenge from her elder sister Madge. As there were Belgian refugees in most parts of the English countryside, Torquay being no exception, Christie thought that a Belgian refugee, perhaps a former great Belgian policeman, would make an excellent detective for her first novel. Hercule Poirot was born.

In 1919, Christie gave birth to her first child with husband Archie, a daughter, Rosalind. This was also the year that publisher John Lane contracted her to produce five more books. She went on to be one of the first authors Penguin ever published in paperback. Following the war Christie continued to write and to travel with Archie, including a Grand Tour of the Empire in 1922 during which she learned to surf in South Africa and Hawaii (in fact she became the first British woman to surf). They divorced in 1928, and Christie then fulfilled one of her lifelong ambitions – to travel on the Orient Express to the Middle East. This and future trips are recognized in books such as Murder on the Orient Express, Death on the Nile, Murder in Mesopotamia, Appointment with Death and They Came to Baghdad, as well as many short stories.

During a trip to the excavations at Ur in 1930, Christie met archaeologist Max Mallowan – the man who became her second husband, and who was fourteen years her Jr.. Their marriage would last forty-six years. She accompanied Max on his annual archaeological expeditions for nearly 30 years. The excursions did nothing to stem the flow of her writing and her book, Come, Tell Me How You Live, published in 1946, wittily describes her early days on digs in Syria with Max.

By 1930, having written several novels and short stories, she had created a new character to act as detective. Miss Jane Marple was an amalgam of several old ladies she used to meet in villages she visited as a child. When she created Miss Marple, Christie did not expect her to become Poirot’s rival, but with The Murder at the Vicarage, Miss Marple’s first outing, it appeared she had produced another popular and enduring character.

In 1971 Christie achieved one of Britain’s highest honours when she was made a Dame of the British Empire. Her last public appearance was at the opening night of the 1974 film version of Murder on the Orient Express starring Albert Finney as Hercule Poirot. Her verdict? A good adaptation with the minor point that Poirot’s moustaches weren’t luxurious enough.

About the filmmaker: Kenneth Branagh is an acclaimed actor and director whose work across film, television and theatre is underscored by quality, truth and passion. He has been nominated for five Academy Awards®, making him one of the first actors to receive five nominations in five separate categories (Actor, Supporting Actor, Director, Screenplay, and Short Film).

Branagh has directed 20th Century Fox’s adaptation of Agatha Christie’s classic mystery, Murder on the Orient Express. In addition to being behind the camera, Branagh will also star as ‘Hercule Poirot’ opposite an all-star cast, including Johnny Depp, Penelope Cruz, Michelle Pfeiffer and Dame Judi Dench. The film is slated to be released in November.

In addition to his work behind the camera, Branagh is also a gifted and well-respected actor. This year, he starred in Christopher Nolan’s critically acclaimed box office hit, Dunkirk. Branagh portrayed ‘Commander Bolton’, a British officer who seeks to evacuate allied soldiers from Belgium, the British Empire, and France surrounded by the German Army during World War II. In 2011, Branagh starred as ‘Sir Laurence Olivier’ in Simon Curtis’ My Week With Marilyn opposite Michelle Williams. The role earned Branagh an Academy Award® nomination for Best Supporting Actor, as well as a Golden Globe and Screen Actors Guild nomination. His additional acting credits include, A Month in the Country, Othello, The Gingerbread Man, Woody Allen’s Celebrity, Alien Love Triangle, Paul Greengrass’s The Theory of Flight, Wild Wild West, Philip Noyce’s Rabbit Proof Fence, Harry Potter and the Chamber of Secrets, Pirate Radio and Valkyrie.

In addition to his successful career in film and television, Branagh is a distinguished director and actors on the stage. This fall Branagh directed a new production of Hamlet, starring Tom Hiddleston, as a fund-raising venture for the Royal Academy of Dramatic Art, where Branagh is President. Last year, The Kenneth Branagh Theatre Company completed its highly regarded and successful inaugural season of Plays at the Garrick Theatre in London’s West End. The productions included The Winter’s Tale, Harlequinade, All on Her Own, The Painkiller, Red Velvet, Romeo and Juliet, and The Entertainer. The work earned the company a prestigious Olivier Award.

Branagh’s stage work began when he made his West End acting debut in Another Country, which earned him the Olivier Award for “Most Promising Newcomer.” He founded the Renaissance Theatre Company for whom he either starred in or directed Twelfth Night, Much Ado About Nothing, As You Like It, Hamlet, Look Back in Anger, Uncle Vanya, King Lear, A Midsummer Night’s Dream, Coriolanus and The Life of Napoleon. He also wrote the plays Public Enemy and Tell Me Honestly. Numerous stage appearances include Henry V, Love’s Labour’s Lost, and Hamlet for the Royal Shakespeare Company. His other theatrical endeavours include directing the hit stage comedy THE PLAY WHAT I WROTE which transferred from London’s West End to Broadway where it received a TONY nomination, and five-star performances on the British stage in Richard III, Mamet’s Edmond,  Ivanov, and the new comedy Painkiller in the opening season at the Lyric Theatre, Belfast, Branagh’s hometown.

Branagh is a graduate of the Royal Academy of Dramatic Art where he won the Bancroft Gold Medal. He received the prestigious Michael Balcon Award from the British Academy of Film and Television Arts (BAFTA), for outstanding contribution to cinema. He was also knighted for services to drama and the community in Northern Ireland by Queen Elizabeth II and will receive the freedom of Belfast from its City Council later this year.

5 thoughts on “Film Notes: Murder on the Orient Express (2017), directed by Kenneth Branagh”