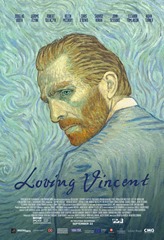 Last week, Begoña and I had the opportunity to watch Loving Vicent, a 2017 animated film written and directed by Dorota Kobiela and Hugh Welchman. The title refers to the standard phrase used by the artist to say goodbye to his brother Theo in the letters he wrote him. The story begins in the summer of 1891, about a year after his death, and revolves around the task that the postman Joseph Roulin entrusted to his son Arnaud, to deliver to Theo van Gogh the last letter from his brother  Vincent. This job will not be exempt of difficulties, but Arnaud will change his attitude during the course of his assignment, from a complete indifference towards a kind of fascination for the painter’s figure that takes him to try to find out the secret that hides  behind the death of the artist.

I would not like to be excessively negative in my appreciation of this film, and I regret to say that it did not lived up to my expectations. I agree with the following comment at The Hollywood Review: ‘ …., the death of van Gogh turns into a murder mystery that revisits his suicide from multiple angles, with a young man named Armand Roulin ….., serving as both detective and narrator. It’s a plot device that keeps the suspense afloat but can also feel somewhat manufactured, if not downright hammy, at times, turning the allusive van Gogh into the protagonist of a garden-variety crime novel.’

Loving Vincent, the world’s first fully painted feature film, is written & directed by Dorota Kobiela & Hugh Welchman, and produced by Poland’s BreakThru Films & UK’s Trademark Films. The film brings the paintings of Vincent van Gogh to life to tell his remarkable story. Every frame of the film, totalling around 65,000, is an oil-painting hand-painted by 125 professional oil-painters who travelled from around the world to the Loving Vincent studios in Poland and Greece to be a part of the production. As remarkable as Vincent’s brilliant paintings, is his passionate and ill-fated life, and mysterious death. No other artist has attracted more attention than Vincent van Gogh. Variously labelled a martyr, a lustful satyr, a madman, a genius and a layabout, the real Vincent is at once revealed in his letters, and obscured by myth and time. Vincent himself said in his last letter: ‘We cannot speak other than by our paintings’. We take him at his word and let the paintings tell the real story of Vincent van Gogh. Loving Vincent was first shot as a live action film with actors then hand-painted over frame-by-frame in oils. The final effect is an interaction of the performance of the actors playing Vincent’s famous portraits, and the performance of the painting animators, bringing these characters into the medium of paint. Loving Vincent stars famous faces to match the famous paintings they portray. (Source: European Film Awards, EFA)

Dorota Kobiela – Writer and Director.
A graduate from the Academy of Fine Arts in Warsaw, Dorota Kobiela was awarded the “Minister of Culture scholarship” for special achievements in painting and graphics for four consecutive years. Through friends Dorota discovered animation and film, and immediately threw herself into learning these new artistic disciplines, attending The Warsaw Film School, Faculty for Directing. She has directed one live action short film, THE HART IN HAND (2006) and five animated shorts – THE LETTER (2004), LOVE ME (2004), MR. BEAR (2005), CHOPIN’S DRAWINGS (2011) and LITTLE POSTMAN (2011). LITTLE POSTMAN was the world’s first, and to her knowledge still only, Stereoscopic Painting Animation film, and won Stereoscopic Best Short Film at the LA 3D Film Festival, 3D Stereo Media (Liege), 3D Film & Music Fest (Barcelona).
For her sixth animated short, LOVING VINCENT, Dorota had planned to combine her passion for painting and film, and to paint the entire film herself. However, once she expanded the project into a feature film the task of writing and directing was such that she has to content herself with directing the [124] painters, although she still managed to paint a few shots in the film that she devised to bring her back to painting!

Hugh Welchman – co-Writer, co-Director and Producer
Hugh graduated from Oxford University with a degree in PPE and a vague notion of wanting to make films. He supported himself through teaching history, selling carpets, and even selling fish, while he joined various grass roots film co-operatives in London. After a few disastrous experiences, where the drama was all behind the camera instead of in front of it, Hugh sought out training at The National Film & Television School.
His graduation film, CROWSTONE, won the Cinefoundation Prize at the Cannes Film Festival, and he was awarded the Sam Mendes Shakespeare Prize. He got his first professional experience producing short films for Monty Python, and then set up BreakThru Films. In 2008 Hugh was awarded an Oscar for BreakThru’s first major production, PETER AND THE WOLF. The film also picked up several other top prizes including the Annecy Cristal and the Rose D’or. PETER AND THE WOLF premiered at a sold out Royal Albert Hall accompanied live by Philharmonic Orchestra, then at the Hollywood Bowl, and has since been performed at over 70 concert halls world-wide. His next film, MAGIC PIANO & THE CHOPIN SHORTS premiered in Beijing’s Forbidden City with pianist Lang Lang, then at London’s South Bank Centre and New York’s Lincoln Centre, and has since been performed in 30 major venues around the world with live solo piano accompaniment. After falling in love with Polish painter and director, Dorota Kobiela, Hugh also fell in love with her film project, LOVING VINCENT, and has been working with her on it ever since. (Source: European Film Awards, EFA)