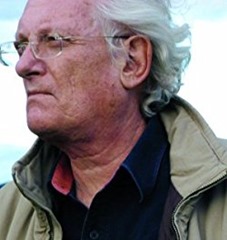 It is with sad regret I heard today from Kerrie Smith (Mysteries in Paradise) that Peter Temple, the first crime writer to win Australia’s most significant literary award, the Miles Franklin, has died. He was 71.Temple died at home in Ballarat on Thursday. He had had cancer for the past six months, having dealt with a bout of the disease several years ago. He is survived by his wife Anita and his son Nicholas. (Source: The Age)

From Amazon: Peter Temple is the author of nine novels, including four books in the Jack Irish series. He has won the Ned Kelly Award for Crime Fiction five times, and his widely acclaimed novels have been published in over twenty countries. “The Broken Shore” won the UK’s prestigious Duncan Lawrie Dagger for the best crime novel of 2007 and was made into an ABC telemovie in 2014. Truth won the 2010 Miles Franklin Literary Award, the first time a crime writer has won an award of this caliber anywhere in the world. Temple’s first two novels “Bad Debts” and “Black Tide” have been made into films with Guy Pearce starring as Jack Irish.

He will be sorely missed. I would like to express my condolences to his family and friends.

So far I have read and reviewed at A Crime is Afoot: Dead Point, The Broken Shore, and Bad Debts.

Jock Serong’s debut novel Quota won the 2015 Ned Kelly Award for Best First Crime Novel. The Rules of Backyard Cricket is nominated for a 2018 Edgar Allan Poe Award and was shortlisted for the 2016 Victorian Premier’s Literary Award. On the Java Ridge is his third novel.  Jock writes feature articles in the surfing media and for a wide variety of publications. He lives in Port Fairy, Victoria. He is married with four children, who in turn are raising a black dog, a rabbit and an unknown number of guinea pigs. (Source: text publishing and Goodreads).

I’ve just downloaded onto my Kindle The Rules of Backyard Cricket and I also have on my wish-list On the Java Ridge. 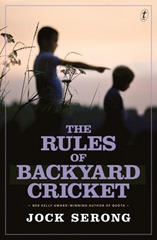 Book description: It starts in a suburban backyard with Darren Keefe and his older brother, sons of a fierce and gutsy single mother. The endless glow of summer, the bottomless fury of contest. All the love and hatred in two small bodies poured into the rules of a made-up game. Darren has two big talents: cricket and trouble. No surprise that he becomes an Australian sporting star of the bad-boy variety—one of those men who’s always got away with things and just keeps getting. Until the day we meet him, middle aged, in the boot of a car. Gagged, cable-tied, a bullet in his knee. Everything pointing towards a shallow grave. {The Text Publishing Company (17 de julio de 2017)} 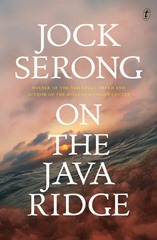 Book description: Amid the furious ocean there was no human sound on deck: some people standing, watching the wave, but no one capable of words. On the Java Ridge, skipper Isi Natoli and a group of Australian surf tourists are anchored beside an idyllic reef off the Indonesian island of Dana. In the Canberra office of Cassius Calvert, Minister for Border Integrity, a Federal election looms and (not coincidentally) a hardline new policy is being announced regarding maritime assistance to asylum-seeker vessels in distress.A few kilometres away from Dana, the Takalar is having engine trouble. Among the passengers fleeing from persecution are Roya and her mother, and Roya’s unborn sister.The storm now closing in on the Takalar and the Java Ridge will mean catastrophe for them all.With On the Java Ridge Jock Serong, bestselling author of The Rules of Backyard Cricket, brings us a literary novel with the pace and tension of a political thriller—and some of the most compelling, heartstopping writing about the sea since Patrick O’Brian. [Text Publishing (31 de julio de 2017)]

See the links below to Bernadette’s reviews at Fair Dinkum Crime:

THE RULES OF BACKYARD CRICKET by Jock Serong

ON THE JAVA RIDGE by Jock Serong