Congratulations to Belinda Bauer whose book Snap has been longlisted for the 2018 Man Booker Prize. 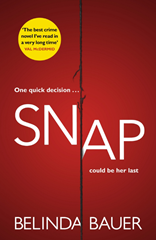 About the book: On a stifling summer’s day, eleven-year-old Jack and his two sisters sit in their broken-down car, waiting for their mother to come back and rescue them. Jack’s in charge, she’d said. I won’t be long. But she doesn’t come back. She never comes back. And life as the children know it is changed for ever. Three years later, Jack is still in charge – of his sisters, of supporting them all, of making sure nobody knows they’re alone in the house, and – quite suddenly – of finding out the truth about what happened to his mother. . .

About the author: Belinda Bauer grew up in England and South Africa and now lives in Wales. She worked as a journalist and a screenwriter before finally writing a book to appease her nagging mother. With her debut, Blacklands, Belinda was awarded the CWA Gold Dagger for Crime Novel of the Year. She went on to win the CWA Dagger in the Library for her body of work in 2013. Her fourth novel Rubbernecker was voted 2014 Theakston Old Peculier Crime Novel of the Year. Her books have been translated into 21 languages.