I can’t hardly wait more to start reading it. 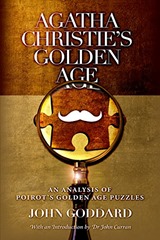 The ‘Golden Age’ of detective fiction in the United Kingdom can fairly be regarded as being roughly the period between 1918 and 1945.  Over that time Poirot appeared in 21 of Agatha Christie’s novels.  The puzzle elements in those novels – Solution, Plot and Clues – are comprehensively examined for the first time in Agatha Christie’s Golden Age.  John Goddard brings to this unofficial analysis of Christie’s work not only the enthusiasm and warmth of a lifelong Christie fan but also the forensic skills of a former lawyer who was for many years a partner in a major City law firm in London.

In the Preface to Agatha Christie’s Golden Age I refer to commentators who assert that certain Christie novels are in, or not in, their ‘top ten’ but whose comments don’t allow that ‘top ten’ to be identified.  I have not ventured a ‘top ten’ of Christie novels in my book but, in view of that remark in my Preface, I don’t think I can ignore the issue entirely.

I think that eight Poirot Golden Age novels would get into my Christie ‘top ten’ puzzles, namely (in publication order):

As for the other two puzzles in that ‘top ten’, one novel will presumably be obvious to readers (because it is generally regarded as her most popular novel) while the other will, in true Christie style, have to remain a mystery until it is analysed in a later volume.

In identifying the best of anything, it is always difficult to avoid an element of subjectivity.  But, as I hope readers of my 21 commentaries will see, I have tried to be as objective as possible in them.  I also believe that, as readers acquire a sense of the overall strength of each puzzle from the positive, or less positive, language used in the commentaries, they will regard the selection of the eight Poirot Golden Age novels listed above as a fair reflection of the detailed assessments in my book.

However, in trying to reduce the eight novels still further, the choice does become more personal.  How can one say objectively that the solution in The Murder of Roger Ackroyd is better than the solution in Murder on the Orient Express or The ABC Murders; or that the murder plan in Lord Edgware Dies is more ingenious than the murder plan in Death on the Nileor One, Two, Buckle My Shoe; or that Murder on the Orient Express is better plotted than The Murder of Roger Ackroyd or Death on the Nile; or that the murderer is more unexpected in Peril at End House than in The ABC Murders or One, Two Buckle My Shoe ?

Those are fine margins, which can only really be judged subjectively, particularly when readers will often be influenced by the impact which the novel had on them when first reading it.  Allowing for that, therefore, I would make the following personal awards in relation to the three puzzle elements:

The choice of Five Little Pigs may seem a bit derivative when Professor Barnard describes it as “the best Christie of all” and John Curran as “my favourite book” on his website.  But I don’t think it’s the best, nor is it my favourite – although it would be very close on both those counts.

I would take it to the desert island because I still get something new from it, factually or emotionally, every time I read it.  It probably contains more potentially relevant facts, described in more different ways, than any other Christie detective novel and I remember thinking, when embarking on my commentary, Where on earth do I begin? I eventually decided that the only thing to do was to create a large chart with columns for the five little pigs and with rows for the episodes in the story (I worked out that there are 14) and to complete it carefully with the verbal and written evidence of the pigs so as to get a proper timeline for all the evidence.  It was the most intricate task of analysis that I undertook in preparing my book but my admiration for the quality of the puzzle only grew as I did it.

US / 104 min / Colour / Caviar, Highwayman Films Dir: Chloé Zhao Pro: Chloé Zhao, Bert Hamelinck, Sacha Ben Harroche, Mollye Asher Scr: Chloé Zhao Cin: Joshua James Richards Mus: Nathan Halpern Cast: Brady Jandreau, Tim Jandreau, Lilly Jandreau, Lane Scott, Cat Clifford Synopsis: After a tragic riding accident, young cowboy Brady (Brady Jandreau), once a rising star of the rodeo circuit, is warned that his competition days are over. Back home, Brady finds himself wondering what he has to live for when he can no longer do what gives him a sense of purpose: to ride and compete. In an attempt to regain control of his fate, Brady undertakes a search for new identity and tries to redefine his idea of what it means to be a man in the heartland of America. Release dates: Cannes Film Festival (Directors’ Fortnight) 20 May 2017; France:  28 March 2018; USA: 13 April 2018; Spain: 21 September 2018. IMDb Rating: 7.5. 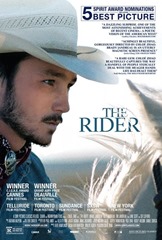 Plot Summary: Once a rising star of the rodeo circuit, Brady is warned that his competition days are over after a tragic riding accident. Back home, he finds himself wondering what he has to live for when he can no longer do what gives him a sense of purpose: to ride and compete. In an attempt to regain control of his fate, Brady tries to redefine his idea of what it means to be a man in the heartland of America. Back home on the Pine Ridge Indian Reservation, South Dakota, he struggles with the physical and emotional complications of the accident. He is comforted by his inimitable little sister Lilly, who has Aspergers Syndrome, yet tensions between Brady and his gambling father, Wayne, is reaching a breaking point when Wayne resorts to selling Brady’s favourite horse, to keep their trailer home.

The Rider is a 2017 American contemporary western drama film written, produced and directed by Chloé Zhao and stars a real-life Lakota Sioux Bronc rider Brady Jandreau and his actual sister Lilly Jandreau and father Tim Jandreau playing versions of themselves. The film was shot in the badlands of South Dakota. It premiered in the Directors’ Fortnight section at the Cannes Film Festival on May 20, 2017, where it won the Art Cinema Award, and at Sundance Film Festival 2018. It was released in theatres in the United States on April 13, 2018.

My take: This week Begoña and I went to see The Rider, a 2017 film, written, produced and directed by Chloé Zhao. The Rider is very close of being a documentary film and, sometimes, it can turn out to be boring because of an overly elemental story wherein nothing relevant happens. Even so, the audience’s patience will be rewarded as it was in my case. When leaving the cinema I ended up with the sense of having seen quite an impressing film, despite some shortcomings. What I most liked, is that it offers an opposite response to the idea that all our dreams may come true. That all our dreams can be achieved if pursued with determination is a false mantra of western civilisation. Much more true is the phrase in the film that more or less says: in life one must deal with the cards that have been given. Furthermore, almost everything in the film is real. The main characters, as most of the characters are non-professionals and, even though  if this provides a genuine touch to the film, in my view it would have been much better to have employed professional actors for some secondary characters. In a nutshell, a film that for my liking falls short  of being a masterpiece, but that it gets pretty close. A honest, sincere and touching film which doesn’t fall into sentimentality and that may not be for the taste of everyone, but which is well worth seeing.

Chloé Zhao Biography: Born in Beijing Chloé Zhao currently resided in the United States. She studied Political Science at Mount Holyoke College and Film Production at NYU. Her 2015 feature debut Songs My Brother Taught Me premiered in US Dramatic Competition at the Sundance Film Festival and Directors’ Fortnight at the Cannes Film Festival. It was nominated for three 2016 Independent Spirit Awards. Among The Rider’s honours are the Cannes Film Festival’s C.I.C.A.E. award, the Golden Athena at the Athens Film Festival, and a Grand Special Prize at the Deauville Film Festival.

Filmmaker Chloé Zhao on Crafting ‘The Rider’, the American Cowboy, and More