Penguin, 2018. Format; Kindle Edition. File Size: 3500 KB. Print Length: 160 pages. ASIN: B076HF4QN2. ISBN: 978-0-241-30388-7. First published in French as Une confidence de Maigret by Le Figaro in serial form between August 24 and September 15, 1959 (20 episodes). The original book edition was published by Presses de la Cité in September 1959. The book was written between April 26 and May 3, 1959 in Noland, Échandens (canton of Vaud), Switzerland. This translation first published  2018. The first English version appeared in 1968 as Maigret Has Doubts and was published by Hamish Hamilton. Lyn Moir was the translator for this and all subsequent English versions. The first American version was published in 1982 by Harcourt Brace Jovanovich. Caution! Not to be confused with Maigret’s Doubts, originally published as Les scrupules de Maigret in 1959, aka Maigret Has Scruples. 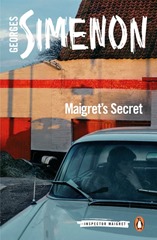 Opening paragraph: The maid had just placed the rice pudding in the middle of the round table, and Maigret hat to make an effort to look both surprised and delighted as a blushing Madame Pardon cast him a mischievous glance.

Book description: At a dinner party, Maigret recounts an old case in which Adrien Josset is found guilty and executed for the murder of his wife, Christine. As the case develops under the controlling hand of the magistrate, all clues point to Josset’s guilt yet Maigret is left unconvinced following his one interview with him. Years after the case, Maigret still doubts the true identity of the murderer.

My take: The Maigrets are in the habit of getting together with Dr Pardon and his wife to have dinner together, either at their home or at theirs. On one of these occasions, Maigret recounts in confidence Dr Pardon a case that took place several years ago that he can’t removed from his head. The circumstances surrounding the death of Christine Josset remain still unclear. Her husband, Adrien Josset, however was soon considered the main suspect. Monsieur Josset always maintained that he found his wife already death in her bedroom, stabbed several times. He panicked and couldn’t think straight, until he eventually ended up denouncing the crime at the local police station several hours later. It also happened that that same evening Adrien Josset, surprised by his mistress’ father, had confessed him he was going to ask his wife for a divorce to marry his daughter. Besides, there was the fact that Adrien Josset was a man of humble condition and, although he had achieved business success and had become manager in a pharmaceutical company, it was no secret this was due to a large extent to his wife’s fortune. In any case, the newspapers soon echoed the case, public opinion straight away found Adrien Josset guilty and Judge Coméliau, the Examining Magistrate, made no qualm about separating inspector Maigret from the case, to take over the investigation himself  personally. Despite the time elapsed, Maigret still wonder whether he acted properly.

Maigret’s Secret is a rather unusual book in the series. even though it contains many standard features with the rest of the books, specifically with the last instalments in Presses de la Cité cycle, however it contains several very original aspects. The story is being told in a long  flashback covering two different encounters between Inspector Maigret and Dr Pardon, to which several inner thoughts of Maigret himself are added. And the reader will also discover some of the most intimate opinions of Maigret himself on several topics. And that, not to mention, the changes that were taking place at the time the book was written like, for instance, the role and strength of the media or of the tabloids, to be more precise. I would like to conclude by saying that I have particularly like the open ending of the story that, in my view, gives rise to different interpretations. In essence, a reading I have much enjoyed, funny at times, that I strongly recommend.

One time, comparing the Paris police’s famously tough grillings with the equally well-known American ‘third degree’, Maigret had suggested that the suspects most likely to get away with it are the idiots. … What he had been trying to say, in fact, was something that he still believed to be true: that a simple-minded man is naturally mistrustful, always on the defensive; he uses the minimum number of words to answer questions, makes no attempt at plausibility and later, when confronted with his self-contradictions, is not knocked off his stride but sticks firmly to his statement. On the other hand, the intelligent man feels the need to explain himself to clear up all doubts in the mind of his interrogator. In an effort to sound convincing, he anticipates questions, provides an excess of detail and, by trying hard to construct a watertight story, ends up getting caught out.

Later, looking back on this moment, he [Maigret] would wonder why it is that certain people are unpleasant from the start, for no obvious reason.

About the Author: Georges Simenon (1903 — 1989), French-language Belgian novelist whose prolific output surpassed that of any of his contemporaries and who was perhaps the most widely published author of the 20th century. He began working on a local newspaper at age 16, and at 19 he went to Paris determined to be a successful writer. Typing some 80 pages each day, he wrote, between 1923 and 1933, more than 200 books of pulp fiction under 16 different pseudonyms, the sales of which soon made him a millionaire. The first novel to appear under his own name was Pietr-le-Letton (1929; The Strange Case of Peter the Lett), in which he introduced the imperturbable, pipe-smoking Parisian police inspector Jules Maigret to fiction. Simenon went on to write 74 more detective novels and 28 short stories featuring Inspector Maigret, as well as a large number of ‘psychological novels’ to which he denominated ‘romans durs’). His total literary output consisted of about 425 books that were translated into some 50 languages and sold more than 600 million copies worldwide. Many of his works were the basis of feature films or made-for-television movies. In addition to novels, he wrote three autobiographical works. Despite these other works, Simenon remains inextricably linked with Inspector Maigret, who is one of the best-known characters in detective fiction. Simenon, who travelled to more than 30 countries, lived in the United States for more than a decade, starting in 1945; he later lived in France and Switzerland. At the age of 70 he stopped writing novels, though he continued to write, or to dictate, nonfiction. (Source: Britannica and own elaboration)

About the Translator: David Watson is dedicated to book editing in all fields: fiction/non-fiction, academic, literary and commercial. Translating (literary and other) from French. David Watson speaks German as well, has a PhD in French and offers also proofreading and indexing services.

Maigret’s Secret has been reviewed at Crime Review.