Penguin Classics, 2019. Format; Kindle Edition. File Size: 5041 KB. Print Length: 174 pages. ASIN: B07NCZRG8J. ISBN: 978-0-241-30422-8. A pre-original version was published in the daily Le Figaro between 2 December 1967 and 3 January 1968 (26 episodes).  First published in French as Maigret à Vichy by Presses de la Cité in 1968. The story was written between 5 and 11 September 1967 in Épalinges (Canton of Vaud), Switzerland. The first English translation came out as Maigret in Vichy in 1969. Eleven subsequent editions followed through 1996, some being entitled Maigret Takes the Waters. The translator for all was Eileen Ellenbogen.  This translation by Ros Schwartz was first published in 2019. 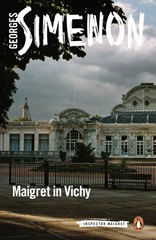 Opening paragraph: ‘Do you know them?’ Madame Maigret asked in an undertone as her husband turned around to loos at a couple they had just passed.

Book description: Maigret and his wife take a much needed holiday to Vichy, where they quickly become used to the slower pace of life. When a woman, who they regularly pass by on their daily strolls, is murdered Maigret can’t help but offer his assistance to the local Inspector,  a former colleague of Maigret’s.

My take: Our Commissaire finds himself in Vichy taking the waters by suggestion of Dr Pardon in the company of his wife. Days pass at a leisurely pace, under a strict diet with nothing of alcohol, and frequent walks to the different thermal springs to drink water.

They had already created a schedule for themselves which they followed meticulously as if it were of the utmost importance, and their days measured out by various ritual which they adhered to religiously.

Sometimes they sit to listen the concert on the bandstand. Occasionally, Maigret stops to watch playing a game of boules. And quite often they amuse themselves making comments on those with whom they cross paths. A woman in particular call their attention. They could have nicknamed her the lady in mauve, or rather the lady in lilac, because she always wore something lilac-coloured.

She looked as if she had come straight out of a picture book. She wore a white hat, whereas most of the women here were bareheaded. The stole around her shoulders was white too, and her dress the lilac colour of which she seemed fond.
The lady in lilac was among those who could have been called Maigret’s inner circle, the people he’d noticed from the start and who intrigued him.
……
One could guess she was used to living in silence, as with nuns, accustomed to solitude. Perhaps she even preferred that solitude. Whether walking or sitting, as she was at present, she paid no attention to promenaders or to her neighbours, and she would probably have been most surprised to learn that outside of any professional obligation Detective Chief Inspector Maigret was trying to gauge her personality.

But one day the murder of Hélène Lange shakes the tranquillity of the thermal resort. Inspector Lecoeur, the Clermont-Ferrand police chief  takes over the investigation. Lecoeur had been a former Maigret colleague who had worked under his command at the Police Judiciaire in Paris. And Maigret cannot avoid to become interested in the investigation, even though, being outside his jurisdiction, all he can do is to offer his assistance to his former subordinate. Maigret himself becomes even more intrigued at finding out that the victim, Hélène Lange, is no other but the woman in lilac, who so powerfully had called his attention the previous days.

Maigret in Vichy turns out to be the story of a detection in which Maigret is forced to play a secondary role. It is probably not advisable to read this story, if one is still not familiar with our character. And it is quite likely that its slow and paused pace is not to the liking of all readers. It should be noted that this is one of the latest novels in the series and Maigret is approaching his retirement age. In a sense, I found it attractive to observe Maigret’s reaction to the way his former subordinate carries out an interrogation in a quite a different way to how he would have done it himself, though not less effective in any case. In a nutshell, Maigret in Vichy tells the fascinating story of a deception that manages to grab our attention until the last page.

About the Author: Georges Simenon (1903-1989) was one of the most prolific writers of the twentieth century, capable of writing 60 to 80 pages per day. His oeuvre includes nearly 200 novels, over 150 novellas, several autobiographical works, numerous articles, and scores of pulp novels written under more than two dozen pseudonyms. Altogether, about 550 million copies of his works have been printed. He is best known, however, for his 75 novels and 28 short stories featuring Commissaire Maigret. The first novel in the series, Pietr-le-Letton, appeared in 1931; the last one, Maigret et M. Charles, was published in 1972. The Maigret novels were translated into all major languages and several of them were turned into films and radio plays. Two television series (1960-63 and 1992-93) have been made in Great Britain. During his “American” period, Simenon reached the height of his creative powers, and several novels of those years were inspired by the context in which they were written. Simenon also wrote a large number of “psychological novels”, as well as several autobiographical works. (Source: Goodreads).

About the Translator: Ros Schwartz is an English literary translator, who translates Francophone literature into English. In 2009 she was awarded the Chevalier d’Honneur dans l’Ordre des Arts et des Lettres for her services to French literature. Alongside literary translation, Schwartz has served on the boards and committees of various literary and translation organisations: Vice-Chair of the Translators Association; Chair of the European Council of Literary Translators Associations (CEATL) from 2000 to 2009; Chair of the Advisory Panel to the British Centre for Literary Translation (BCLT) from 2005 to 2009; and Chair of English PEN’s Writers in Translation Programme from 2010 to 2014. She has worked to develop literary translation as a profession by supporting young translators, initiating mentoring schemes, summer schools (e.g. Translate in the City, first at Birkbeck College, then at City University London), workshops and masterclasses (e.g. at Goldsmiths College, the University of Middlesex, Universities of Westminster, East Anglia, Bath, Warwick, Leicester, Glasgow and Manchester). Schwartz has also written about literary translation: see, for example, “A Dialogue: On a Translator’s Interventions”, by Ros Schwartz and Nicholas de Lange, in Susan Bassnett and Peter Bush (eds), The Translator as Writer (Continuum, London and New York, 2006), and articles published in The Linguist, the ATA Bulletin, The ITI Bulletin, Context (nos 20, 21, 21 – Dalkey Archive Press), and the British Council literary translation website. She is a regular contributor to In Other Words, the journal of the Translators Association and the British Centre for Literary Translation. She was also a consultant on the revised Robert and Collins French-English/English-French Dictionary; a judge for the Larousse “Grand Prix de la Traduction”, Paris, 1995; and a judge for the Aurora Borealis Prize of the Fédération Internationale des Traducteurs 1999. Schwartz has translated numerous French and Francophone authors including Catherine Clément, Georges Simenon, Régine Deforges, Dominique Eddé [fr], Dominique Manotti, Claudine Vegh, Emmanuel Raynaud, Aziz Chouaki, Fatou Diome, Yasmina Khadra, Julien Neel, Jacqueline Harpmann, Olivier Roy, Antoine de Saint-Exupéry. She recently produced new translations of classic favourites, such as Le Petit Prince and has been part of the international team re-translating the novels of Georges Simenon into English. (Source: Wikipedia)

Mi valoración: B (Me gustó)