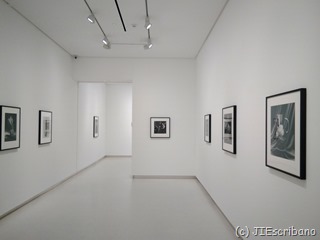 Taking advantage that high temperatures in Madrid gave us a truce these days, Begoña and I went to visit the exhibition Robert Mapplethorpe – Still Lifes at Galeria Elvira Gonzalez on view until 13 July 2019.

Galería Elvira González is pleased to present Robert Mapplethorpe – Still Lifes, the third exhibition at the gallery dedicated to the American artist. In collaboration with The Robert Mapplethorpe Foundation, this presents, through a wide selection of works, Mapplethorpe’s vision of inanimate and everyday objects that make up his still lifes.

This exhibition brings together works created by the artist in New York City between 1978 and 1984. Mapplethorpe attended the Pratt Institute of Art at a time marked by artistic currents such as body art, minimal and conceptual art, which made use of photography detached from its formal or aesthetic side. This period was also characterized by a strong return of painting, in which the use of the photographic medium was notably reduced. When Mapplethorpe evolved from collage and began to use his Polaroid camera as his primary artistic practice, the genres “art” and “industry” were separated under the categories “high” and “low” culture.  The photographic technique was linked to merely commercial purposes and dependent on the trade. His development as a photographer coincides, thus, with a general rise of kitsch culture within the cultural consciousness, evidenced by the widespread exhibition of objects and attitudes reimagined as luxurious and simultaneously attainable for all.

In this context, Mapplethorpe rescued the formal amplification that photography allows and incorporated it into its conceptual facet. Raw and direct images of sadomasochism combined with the most meticulous compositional direction, pure sexual acts with the most exact pictorial classicism, a simple flower with the most exaggerated sensuality and eroticism. Mapplethorpe’s poetics demonstrated a total fusion between art and life, in which he often placed his own reality at the center.

Since his death 30 years ago, there continues to be international interest and exhibitions of his work. Mapplethorpe left a vast legacy to be explored which today still survives as radically contemporary. This exhibition emphasizes the artist’s intimate relationship with objects, flowers and everyday scenes, opening the way to investigate his work with an unprecedented perspective in Spain.

Robert Mapplethorpe (New York, 1946 – Boston, 1989) grew up on the outskirts of New York in a Catholic environment, with no ties to the art world. In 1963 he enrolled at the Pratt Institute of Art, in Brooklyn, where he studied drawing, painting and sculpture, and began to know and delve into the work of artists such as Joseph Cornell and Marcel Duchamp. In 1970 he acquired a Polaroid camera and took his first photographs, which he began to incorporate into his collages. Progressively, he abandoned collage to focus only on photography, making his first individual exhibition Polaroids at the Light Gallery in New York. During these years Mapplethorpe expanded his social environment and, in parallel, progressed in his mastery of photography through portraits of his acquaintances in the artistic, nocturnal and underground circles of New York City. He combined his artistic development with commercial projects, such as the cover of Patti Smith’s album – who becomes his best friend and inseparable muse – or photographs for Interview magazine. Thus, Mapplethorpe intensely immersed himself in the hurricane of New York’s art and cultural scene in a search to find his place and shortly achieved an enormous social and cultural recognition.

In April 2018, the film Mapplethorpe (2018), directed by Ondi Timoner, premiered at the Tribeca Festival in New York.  Likewise, several exhibitions have been held around the world, such as the individual exhibition at Galleria Franco Noero in Turin; Robert Mapplethorpe, Coreografía per una mostra, at the Museo Madre – Museo d’Arte Contemporanea Donnaregina, Naples; or Implicit Tensions: Mapplethorpe Now, at the Solomon R. Guggenheim Museum, New York. The exhibition at Galería Elvira González joins this commemoration and is part of PHotoEspaña – OFF Festival 2019.

Join 289 other followers
Follow A Crime is Afoot on WordPress.com