Though I may arrive late, one of the publishing events of this year was the release of several books by Brian Flynn. Unfortunately Brian Flynn books until now were, and some still are, very difficult to find. Fortunately, the nice folk at Dean Street Press decided to republish the first ten books: The Billiard Room Mystery (1927); The Case Of The Black Twenty-two (1928); The Mystery Of The Peacock’s Eye (1928); The Murders Near Mapleton (1929); The Five Red Fingers (1929); Invisible Death (1929); The Creeping Jenny Mystery (1930); Murder En Route (1930); The Orange Axe (1931); and The Triple Bite (1931). They all come with an Introduction by crime fiction historian Steve Barge (The Puzzle Doctor), who blogs at In Search of the Classic Mystery Novel.

But who was Brian Flynn? Up to now the only information available in the Internet referred to Brian Flynn (1885-1958), an English author and an accountant in government service, a lecturer in elocution and speech, an amateur actor, who wrote about 50 novels, mostly for the library market. His serial character is Anthony Bathurst. (gadetection) In addition to that you may see also the following post at Mystery File, and the following page at Classic Crime Fiction, but besides that very little was known.

Now we know that Brian Flynn was born in 1885 in Leyton, Essex. He won a scholarship to the City Of London School, and from there went into the civil service. In World War I he served as Special Constable on the Home Front, also teaching “Accountancy, Languages, Maths and Elocution to men, women, boys and girls” in the evenings, and acting in his spare time. It was a seaside family holiday that inspired Brian Flynn to turn his hand to writing in the mid-twenties. Finding most mystery novels of the time “mediocre in the extreme”, he decided to compose his own. Edith, the author’s wife, encouraged its completion, and after a protracted period finding a publisher, it was eventually released in 1927 by John Hamilton in the UK and Macrae Smith in the U.S. as The Billiard-Room Mystery. The author died in 1958. In all, he wrote and published 57 mysteries, the vast majority featuring the super-sleuth Anthony Bathurst. (Source: Dean Street Press)

By the way it was of interest to me to find out that Brian Flynn wrote mainly for what it is called library publishers (publishers whose aim was to produce books which libraries would buy – often by quantity rather than by author. If libraries bought his books, he would keep on writing).  What a difference with Spanish publishers! who would rather destroy their unsold books before giving them away freely to public libraries. 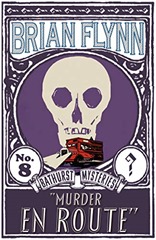 Anthony Bathurst drops into a Glebeshire church and when it transpires that the vicar is acquainted with the medical examiner on a case of murder, Bathurst is hooked. He is soon on the trail of a most bizarre murderer. Who could have slain the slightly mysterious, yet quite unsuspicious, man on the top of a local bus? Bathurst assembles a band of helpers, with the reluctant help of Inspector Curgenven, to get to the bottom of a most perplexing case. And the vicar himself helps narrate the story of what is a seemingly impossible crime.

What others have said:

Jim F Norris @ Pretty Sinister Books: ‘Being one of Flynn’s earliest mystery novels Murder En Route was published in both UK and US editions. But obviously both are as rare as a wooden nickel these days. However, if you are lucky enough to stumble across a copy I’d snap it up in an instant. I enjoyed it immensely and it proves that the obscure writers can dish up an engrossing, ingenious and thrilling detective story to match any of the greats of the Golden Age.’

TomCat @ Beneath the Stains of Time: ‘Overall, Murder en Route is a solidly plotted and fascinating detective novel about a victim who’s as elusive as his murderer, but all of the clues are there for you to pick up and put together, if you can – making it my favorite entry in the series so far. Highly recommended!’

Steve Barge @ In Search of the Classic Mystery: ‘Overall, this is a nicely complex yet clear plot, with some good twists and turns, with the overall picture being an imaginative one. The reader may guess some parts of it, but there are clues there as to what’s going on, and it’s written with Flynn’s light touch making it, as ever, a very enjoyable read, from the opening sections on the bus to the exciting and somewhat unlikely finale. Yes, some characters suffer from the mystery-novel syndrome of not doing the obvious thing due to it making a better story – Flynn is hardly alone in committing this sin – but this is a clever and fun read. Who could ask for more?’

“This is not suicide, gentlemen. This is murder! Cold-blooded murder! The sooner we get the police here and find Sir Eustace Vernon, the better!”

Christmas Eve at Vernon House is in full swing. Sir Eustace’s nearest and dearest, and the great and the good of Mapleton, are all there. But the season of comfort and joy doesn’t run true to form. Before the night is out, Sir Eustace has disappeared and his butler, Purvis, lies dead, poisoned, with a threatening message in his pocket. Or is it her pocket?

That same evening, Police Commissioner Sir Austin Kemble and investigator Anthony Bathurst are out for a drive. They come across an abandoned car at a railway crossing, and find a body – Sir Eustace Vernon, plus two extraordinary additions. One, a bullet hole in the back of his head. Two, a red bon-bon in his pocket with a threatening message attached.

The Murders near Mapleton was originally published in 1929. This new edition includes an introduction by crime fiction historian Steve Barge.

Curtis Evans @ The Passing Tramp: ‘All in all, I would say The Murders near Mapleton is a meritorious example of the pure puzzle type of detective novel that a certain type of mystery fan still clamors for today.  Let’s help make next year’s yuletide gay by gifting readers with a Brian Flynn.  I have a certain feeling he will be coming back in print.’

Steve Barge @ In Seach of the Classic Crime Mystery: ‘A well-crafted mystery that keeps the reader’s attention while sticking to the classic whodunit structure. Sure, it’s not in the same league as Dame Agatha, but it’s a damn sign finer than anything by Dame Ngaio.’

TomCat @Beneath the Stains of Time: ‘Other than those two, relatively minor complaints, The Murders Near Mapleton is a shrewdly plotted, fairly-clued detective novel and deserving to be marked as a long-lost classic of the seasonally-themed mystery novel. A fine addition to the ever-growing list of unjustly forgotten detective stories rescued from obscurity by DSP and look forward to October!’

Kate Jackson @ crossexaminingcrime: ‘Although this book takes place over a couple of weeks, a considerable chunk takes place within 24 hours over Christmas Eve and Christmas Day, which gives the story a quick pace and the reader a strong desire to find out what happens next. So, if you’re looking for a new festive mystery read then I highly recommend giving this one a go!’