Pushkin Press, 2018. Format: Kindle Edition. File Size: 4680 KB. Print Length: 224 pages. ASIN: B07JVLGPFD. ISBN: 978-1-78227-524-4. A collection of twelve stories featuring an unnamed armchair detective who appears in a series of short stories written by Baroness Orczy. The character first appeared in The Royal Magazine in 1901 in a series of six “Mysteries of London”. The title, The Old Man in the Corner (U.S. edition: The Man in the Corner) was given to one of the collections of the earliest stories. Although it contains the earliest written stories in the series, they were not collected in book form until 1908 by Hodder & Stoughton , some four years after the chronologically later stories in The Case of Miss Elliott (1905). The last book in the series is the much later Unravelled Knots (1925). 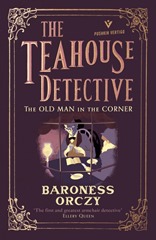 Product Description: Mysteries! There is no such thing as a mystery in connection with any crime, provided intelligence is brought to bear upon its investigation.

So says a rather down-at-heel elderly gentleman to young Polly Burton of the Evening Observer, in the corner of the ABC teashop on Norfolk Street one afternoon. Once she has forgiven him for distracting her from her newspaper and luncheon, Miss Burton discovers that her interlocutor is as brilliantly gifted as he is eccentric – able to solve mysteries that have made headlines and baffled the finest minds of the police without once leaving his seat in the teahouse. As the weeks go by, she listens to him unravelling the trickiest of puzzles and solving the most notorious of crimes, but still one final mystery remains: the mystery of the old man in the corner himself.

The Old Man in the Corner is a classic collection of mysteries featuring the Teahouse Detective – a contemporary of Sherlock Holmes, with a brilliant mind and waspish temperament to match that of Conan Doyle’s creation.

My Take: The Old Man in the Corner is an unnamed armchair detective who appears in a series of short stories written by Baroness Orczy. This volume contains twelve of the stories featuring the mysterious man who sits in the corner of the ABC tea shop fiddling with a piece of string whilst working out the solutions to crimes that have baffled the police. Each case is unfolded during the course of a conversation between the man in the corner and a lady journalist, an ingenious method that avoids the necessity of a clumsy tacked-on explanation of the crime. Apparently Baroness Orczy’s husband advised her to create a detective who was as unlike Sherlock Holmes as it was possible for a detective to be. She certainly succeeded. This rather shabby, very eccentric detective is like no other. And he has no interest in helping the police or the courts to bring criminals to justice and in fact never lifts a finger to do so – for him it is purely an intellectual challenge. Which of course means that both the reader and the lady journalist in the tea shop have to accept on faith the old man’s solution to these criminal puzzles. (Source: Wikipedia)

Julian Symons’ review in Bloody Murder is indeed worth quoting in full:

Originality . . . must be granted to the Old Man in the Corner invented by Baroness Orczy (1865 – 1947). He preceded her better known Scarlet Pimpernel, and appeared in three collections, The Case of Miss Elliott (1905), The Old Man in the Corner (1909) and Unravelled Knots (1925). The Old Man sits in a corner of an ABC teashop consuming glasses of milk and pieces of cheese-cake, endlessly tying and untying knots in a piece of string, and giving his solution of cases that have baffled the police to a girl reported named Polly Burton, who seems never to have read the newspapers, since the Old Man has to describe the background of every case to her in detail. ‘There is no such thing as a mystery in connection with any crime, provided intelligence is brought to bear upon its investigation.’ he says in characteristic Superman style, and he is never seen to move from his seat, although he mentions attending court hearings in several cases. The misanthropic Old Man is concerned solely with demonstrating his own cleverness . He does not care at all about justice, and it is a peculiarity of the stories that in many of them the criminal goes free. ‘Hang such a man! Fie!’ he cries about one murderer, and of another he reflects only that ‘There goes a frightful scoundrel unhung’.
. . .
The writing is quite lively, and some of the stories contain ideas put to better use by other writers, . . .

In few words, Baroness Orczy created the prototype of the armchair sleuth that will be used as an example of other characters as Rex Stout’s Nero Wolfe, Jorge Luis Borges’ Isidro Parodi and even Agatha Christie’s Hercule Poirot. She was also the first mystery writer to structure her stories around a puzzle and its solution, without putting all the emphasis in a terrifying atmosphere, in methods of fantastic murders and in other very dramatic touches. Which makes her a true forerunner of what it will later be known as The Golden Age of Detective Fiction.

The stories collected in this volume are not (with one exception) the original version published in The Royal Magazine in 1901. They come instead from the book published in 1909 The Old Man in the Corner. For this compilation of the stories, baroness Orczy slightly rewrote twelve of her first thirteen stories in order to adapt them to a semi-novelistic form. In the process, she gave a name (“Polly Burton”) to the Old Man’s confidant (a “Lady Journalist” not identified in the magazine versions of the stories) and incorporated several references to Polly’s personal life that served as a common thread between stories. These alterations also involved the conversion of the stories from first person narration (by the “Journalist”) to third person narration. Finally, several of the stories were divided into two (or more) chapters to hide their story origins.

In conclusion it only remains to me to paraphrase John Grant when he wrote that ‘I found this tremendous fun’. And despite the fact that I only rate it as B, I recommend its reading to all enthusiast of the genre.

The Old Man in the Corner has been reviewed, among others at Goodreads (by John Grant), AQ’s Reviews, The Book Decoder,

About the Author: Baroness Orczy (1865-1947) Emma (“Emmuska”) Magdolna Rozália Mária Jozefa Borbála Orczy de Orczi, was a Hungarian-born British author, best known for her Scarlet Pimpernel novels. Baroness Orczy was born in Tarnaörs, Hungary, as the only daughter of Baron Felix Orczy, a noted composer and conductor, and his wife Emma. Her father was a friend of such composers as Wagner, Liszt, and Gounod. Orczy moved with her parents from Budapest to Brussels and then to London, learning to speak English at the age of fifteen. She was educated in convent schools in Brussels and Paris. In London she studied at the West London School of Art. Orczy married in 1894 Montague Barstow, whom she had met while studying at the Heatherby School of Art. Together they started to produce book and magazine illustrations and published an edition of Hungarian folktales. Her Teahouse Detective, who features in The Old Man in the Corner, was one of the first fictional sleuths created in response to the Sherlock Holmes stories’ huge success. Initially serialised in magazines, the stories in this collection were first published in book form in 1908 and have since been adapted for radio, television and film. Two other collections of Teahouse Detective mysteries: The Case of Miss Elliott (1905) and Unravelled Knots (1925), are available from Pushkin Vertigo.

The Old Man in the Corner Full Audiobook by Baroness Orczy

Mi valoración: B (Me gustó)

2 thoughts on “My Book Notes: The Teahouse Detective: The Old Man in the Corner (1908) by Baroness Orczy”