Ianthe Bridgeman Jerrold was born in Kensington, London, UK in 1898 into a clever, literary family; her great-grandfather Douglas William Jerrold, was a well-known Victorian playwright and journalist, her great-uncle William Blanchard Jerrold a journalist and author, her father Walter Copeland Jarrold, a journalist and author, and his wife Clara Armstrong Jarrold, nee Bridgman, was also a journalist and author. With such a background, it is not surprising that she developed a precocious talent for writing. Before she was ten years old she had short stories appearing in newspapers, and by 1918 she had published two books of poetry and had two short stories in the magazine The Strand. Despite this literary out-put, she also worked in a munitions factory during World War I.

Ianthe was the eldest of five daughters, all named after characters in Greek mythology, Daphne, b. 1899, Phyllis, b. 1899, Hebe, b. 1901, Althea, b/ 1902 and Florence, b. 1913. Twins Daphne and Phyllis attended the Slade School of Art and Hebe also showed an interest in collage art. Ianthe and her sisters spent some years living and working in a studio flat in St John’s Wood, London, and it was in an artist’s studio flat that she set her first detective novel.

In 1923, she published her first novel, Young Richard Mast. A Study of Temperament. This was followed by Hangingstone Farm (1924), Uncle Sabine (1925), and Midsummer Night (1927). In 1927 Jerrold married George Mendes (the brother of the celebrated violinist Isolde Mendes) and moved with him to a dilapidated farmhouse in the Wye Valley, which they spent much time and effort renovating. In 1929 she published the first of two classic and influential whodunits. The Studio Crime gained her immediate acceptance into the recently-formed but highly prestigious Detection Club, and was followed a year later by Dead Man’s Quarry. Ianthe Jerrold subsequently moved on from pure whodunits to write novels ranging from romantic fiction to psychological thrillers. She continued writing and publishing her fiction into the 1970’s. She died in Kensington in 1977, twelve years after her husband George Menges, and left her beloved farmhouse, Cwmmau, to the National Trust. (Based on information primarily from the following source: Detectives of the Golden Age, by Carol Westron)

Dean Street Press has reissued also two forgotten mysteries written by Ianthe Jerrold under the pseudonym “Geraldine Bridgman” (Let Him Lie and There Might Be Danger).

The Studio Crime is the first of Ianthe Jerrold’s classic whodunit novels, originally published in 1929. Its impact led to her membership of the elite Detection Club, and its influence can be felt on later works by John Dickson Carr, Ngaio Marsh and Dorothy L. Sayers among others. This edition, the first in eighty years, includes a new introduction by crime fiction historian Curtis Evans.

Dead Man’s Quarry is the second of Ianthe Jerrold’s classic and influential whodunits, originally published in 1930. This edition, the first for more than eighty years, features a new introduction by crime fiction historian Curtis Evans.

Let Him Lie is a classic golden age detective story from 1940, written by a queen of the form. It includes a new introduction by crime fiction historian Curtis Evans.

There May Be Danger was first published in 1948, and was the last mystery novel by Ianthe Jerrold. This edition features a new introduction by crime fiction historian Curtis Evans.

Curtis Evans wrote about this two almost forgotten novels: ”In the two newly reissued Ianthe Jerrold novels, the author abandons her brilliant amateur detective, John Christmas, who appeared in her earlier books The Studio Crime and Dead Man’s Quarry, in favor of intrepid women sleuths who are drawn into crime investigation out of their sense of empathy for the plights of others, especially children. These two fine mystery novels, which reflect events from Ianthe Jerrold’s own life in the 1940s (. . . ), look ahead to the modern crime novels of authors like Ann Cleeves, I would argue; and I’m very happy to see them back in print after, respectively, 75 and 67 years!” 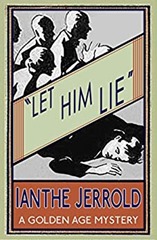 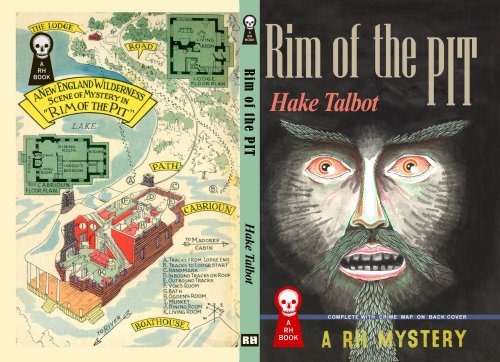 Rim of the Pit by Hake Talbot

Hake Talbot wrote only two mystery novels: Rim of the Pit is his masterpiece, an “impossible crime” that takes place in the far north where snow surrounds a group of desperate people, one of whom is bent on murder. The mapback cover from the 1950’s Dell paperback is one of the best crime maps ever drawn. In addition, this book contains a short story by Talbot called “The Other Side”.

In 1944 Hake Talbot wrote his masterpiece, a locked room mystery about a group of people stuck at a snow-surrounded lodge in Canada. An excellent map of the area shows just how claustrophobic snow can be. 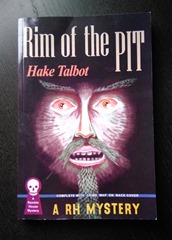 Hake Talbot is a pen name of the American writer Henning Nelms (1900-1986). Talbot was chiefly known for his impossible crime, locked room mystery novel Rim of the Pit (1944). Nelms reserved his real name for writing non-fiction about showmanship (his chief occupation was as a stage magician). He was the author of the book Magic and Showmanship: A Handbook for Conjurers (1969). During a 1981 poll by experts arranged by Edward D. Hoch, for the preface of his anthology All But Impossible!, Talbot’s Rim of the Pit stood second, next only to John Dickson Carr’s The Hollow Man (1935) as the best locked room mystery. Another novel, The Hangman’s Handyman, which Talbot wrote in 1942, was not as successful. He also wrote two short stories, “The High House” and “The Other Side”. (Source: Wikipedia) 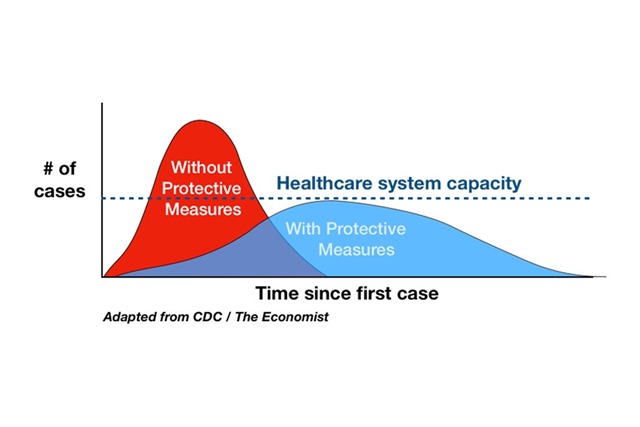 An image to help explain why it is important to curb the expansion of coronavirus.

Join 289 other followers
Follow A Crime is Afoot on WordPress.com