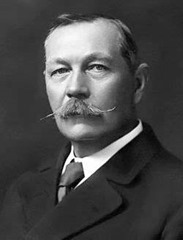 Sir Arthur Conan Doyle was born in Edinburgh, Scotland, in 1859. Doyle’s family (Conan was his middle name, and it was only later in life that he began to use it as his surname) sent him to Jesuit boarding schools to be educated, and he later entered the University of Edinburgh Medical School in 1881. One of his professors at the university was Dr. Joseph Bell, who became the model for Doyle’s Sherlock Holmes. It was Bell who drummed into Doyle’s head the importance of using his innate powers of observation to help him deduce the nature of a patient’s affliction. While in school, Conan Doyle began writing to earn a little extra money. His first story, The Mystery of the Sasassa Valley was published in the Chambers’ Journal in 1879. Shortly after, his father fell ill, and Doyle was forced to become the breadwinner for the family. He worked for a time as a ship’s doctor, then opened his own medical practice near Portsmouth. In his spare time he did more writing.

In 1885 Conan Doyle married Louise Hawkins, and had two children with her, before she died after a protracted illness in 1900. In 1907 he remarried, to Jeanne Leckie, and had three more children with her. His third attempt at a novel was A Study in Scarlet, the story which introduced Sherlock Holmes to the world. Study was published in Mrs. Beeton’s Christmas annual, in 1887. Encouraged by publishers to keep writing, Conan Doyle wrote his second Holmes mystery, The Sign of the Four, in 1890. So successful were these novels, and the stories which followed, that Conan Doyle could afford to give up his medical practice and devote himself to writing full time. The first Sherlock Holmes short story, A Scandal in Bohemia, appeared in The Strand Magazine in 1891, to be followed by two dozen more stories over the next several years. The stories proved enormously successful, but Conan Doyle tired of his own creation, and in 1894 he killed Holmes off in The Final Problem.

He underestimated the popularity of his creation. So great was the hold that the character of Sherlock Holmes had taken on the public imagination that Conan Doyle found himself at the centre of a storm of controversy. He was inundated with letters of protest, including one from a female reader who addressed him simply as “You Brute!”. He bowed to the inevitable, and revived the character of Holmes, who appeared in numerous short stories over the next 23 years.

But Conan Doyle did not confine himself to Sherlock Holmes; he wrote several popular works of historic fiction, including Micah Clarke (1888), The White Company (1890), Rodney Stone (1896), and Sir Nigel (1906).
Conan Doyle served as a doctor in the Boer War, and on his return he wrote two books defending England’s participation in that conflict. It was for these books that he received his knighthood in 1902. After the death of his son in World War I, Conan Doyle became interested in spiritualism. He was convinced that it was possible to communicate with the dead, and his views led to a certain amount of ridicule from more mainstream society.

Sir Arthur Conan Doyle died on July 7, 1930, and is buried in the churchyard at Minstead, Hampshire. He can rightly be credited with helping create the literary genre of the detective story. Though Edgar Allen Poe’s Dupin predates Sherlock Holmes, it was the Holmes’ stories that solidified in the public mind what a good detective should be. (Source: David Ross, Editor Britain Express)

The Canon of Sherlock Holmes: Traditionally, the Canon of Sherlock Holmes consists of the 56 short stories and four novels written by Sir Arthur Conan Doyle. In this context, the term “canon” is an attempt to distinguish between Doyle’s original works and subsequent works by other authors using the same characters. The traditional canon—usually capitalized by aficionados of the Sherlockian game as “the Canon”—consists of four novels and 56 short stories. The description of these 60 adventures as the Sherlock Holmes canon and the game of applying the methods of “Higher Criticism” to it was started by Ronald Knox as a playful use of the traditional definition of Canon as an authoritative list of books accepted as Holy Scripture. (Source: Wikipedia)

The 56 short stories are collected in five books:

The Adventures of Sherlock Holmes is a collection of twelve short stories by Arthur Conan Doyle, first published on 14 October 1892. It contains the earliest short stories featuring the consulting detective Sherlock Holmes, which had been published in twelve monthly issues of The Strand Magazine from July 1891 to June 1892. The stories are collected in the same sequence, which is not supported by any fictional chronology. The only characters common to all twelve are Holmes and Dr. Watson and all are related in first-person narrative from Watson’s point of view. In general the stories in The Adventures of Sherlock Holmes identify, and try to correct, social injustices. Holmes is portrayed as offering a new, fairer sense of justice. The stories were well received, and boosted the subscriptions figures of The Strand Magazine, prompting Doyle to be able to demand more money for his next set of stories. The first story, “A Scandal in Bohemia”, includes the character of Irene Adler, who, despite being featured only within this one story by Doyle, is a prominent character in modern Sherlock Holmes adaptations, generally as a love interest for Holmes. Doyle included four of the twelve stories from this collection in his twelve favourite Sherlock Holmes stories, picking “The Adventure of the Speckled Band” as his overall favourite. (Source: Wikipedia)

Sherlock Holmes stories by Mike Grost: The core of Doyle’s accomplishment are the three first volumes of Sherlock Holmes stories, The Adventures, The Memoirs and The Return. Many of these tales contain brilliant puzzle plots, with remarkable surprise endings. They also are loaded with genuinely colorful and imaginative events. Doyle’s mysteries tend to center around situations. He tends to present the reader with some extremely puzzling situation, one that is difficult to explain. He then solves the mystery, by developing some brilliant twist that stands the apparent situation on its head.

Doyle had little interest in alibis in his work. This is not because mystery fiction was unaware of them: they were used by such 1860’s writers as Harriet Prescott Spofford and Charles Martel. In general, Doyle was not deeply interested in whodunit. He did not present a crime, have several suspects around who might equally have committed it, and then challenge the reader to pick which one of them actually did. Doyle’s very popular contemporary Fergus Hume did this in The Mystery of a Hansom Cab (1886), a book Doyle had read, and disliked. So Doyle could have set up his mysteries this way: he had certainly seen the pattern in Hume’s work. Whodunits were also used by Anna Katherine Green, another author whose work Doyle knew. Doyle only rarely begins his stories with a murder. Instead, Holmes is most commonly called on to investigate a theft, blackmail, a disappearance, or a strange job a middle class person is asked to do, as in “The Red-Headed League”, “The Adventure of the Copper Beeches” or “The Stockbroker’s Clerk”. When there is a killing, it is often a byproduct of a theft, such as in “Silver Blaze” or “The Reigate Puzzle”. “The Boscombe Valley Mystery” is an example of a full-fledged murder mystery within the Holmes canon.

Doyle, and Holmes and Watson, loved the fantastic, the outré and the bizarre in his cases. He is at the start of a great tradition of surrealism in modern mystery fiction. Virtually all the great 20th Century authors of detective stories had a strong surrealist element to their work. This cuts across schools. It is a dominant tradition among intuitionist writers, such as Carr, Queen and Chesterton, but one also finds it in Rinehart, Frederick Irving Anderson, and other Early American writers of their generation, and among Freeman, Sayers and the Realist school. Most of these writers were strongly influenced by Doyle, and paid written tribute to his work. Throughout this Guide I have often referred to this as a “surrealist” aspect of their work; but Doyle’s fiction preceded by many years both Surrealism, and its ancestor Dada. Dada emerged around World War I, c1917, with Surrealism following in the 1920’s, while Doyle’s love for the bizarre was emphasized in The Adventures of Sherlock Holmes of 1891 – 1892. Doyle also influenced surrealist-like activity in other media, such as film. For example, take Juve contre Fantômas (1913). This hour long film is Chapter 2 of Louis Feuillade’s movie serial Fantômas. The bedroom scenes here seem to be directly derived from Doyle’s “The Adventure of the Speckled Band” (1892). Feuillade’s work was much admired by the Surrealists.

Doyle’s Sherlock Holmes stories were huge popular successes. It has become de rigueur for histories of mystery fiction to attempt to explain why. But, after reading a dozen or so such purported explanations, I remain skeptical that critics actually know why. Shouldn’t any genuine explanation involve interviewing the public, asking them questions about why they like the stories, and analyzing their responses, perhaps using statistics? A critic can explain why he or she likes the stories; but just by analyzing the story itself, cannot really determine what the public thinks about it. Unfortunately, as far as I know, there were no pollsters around in the 1890’s measuring public attitudes.

Join 288 other followers
Follow A Crime is Afoot on WordPress.com