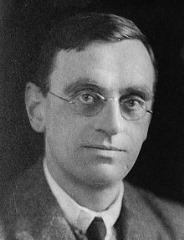 H. C. Bailey was an English author of mysteries. He was born Henry Christopher Bailey in London, on 1 February 1878, and died in Llanfairfechen, North Wales, on 24 March 1961. He lived most of his life in London, attended the City of London School, and graduated with honours in classics from Corpus Christi College of the University of Oxford. He took to writing early, publishing My Lady of Orange (1901) during his senior year at Oxford, and spent many years as a journalist and author of romantic fiction before he began writing detective novels.

Call Mr. Fortune (1920) introduced the world to Reggie Fortune, a brilliant investigator with a knack for solving chilling murder mysteries, who would become one of the most popular sleuths of the English golden age of detective fiction.

From 1901 to 1946, Bailey worked for London’s Daily Telegraph. He began as a drama critic and was a war correspondent, and finally an editorial writer. In addition to his mystery stories, he also wrote an historical novel each year from 1901 through 1928. These novels had various settings and were from a variety of historical periods. He also wrote a history of the Franco-Prussian war.

Bailey married Lydia Haden Janet Guest in 1908, and they had two daughters. He did his writing in the evenings after his work on the Daily Telegraph. In addition to his writing, he also enjoyed gardening. He was a founding member of The Detection Club.

A second series character, Joshua Clunk, is a sanctimonious lawyer who exposes corruption and blackmail in local politics, and who manages to profit from the crimes. He appears in eleven novels published between 1930 and 1950, including The Sullen Sky Mystery (1935), widely regarded as Bailey’s magnum opus. Bailey’s works were published in a number of magazines, primarily The Windsor Magazine but also Adventure and Ellery Queen’s Mystery Magazine.

Bailey retired from writing in 1950, and spent the last years of his life living in North Wales. (Several sources)

A Guide to Classic Mystery and Detection

The Rue Morgue Press has an author profile. This includes an essay “Meet Mr. Fortune” by Bailey.

When father is away, Reggie Fortune is left in charge of his quiet country medical practice. A young doctor with a sluggish work ethic and a passion for sweets, Fortune is at his happiest when tending to an old man’s illness or curing a poor boy’s broken leg. When a call comes in alerting Fortune that the archduke has been found unconscious in the road, he hurries no more than he would for a regular patient. But as he discovers when he inspects the lord, this is a most irregular case. The archduke lives—but another man has been murdered in his name. This collection of six puzzling stories introduced the world to Reggie Fortune, a remarkable detective whose rotund frame conceals a razor-sharp mind and a fighting spirit. A true champion of the oppressed, Fortune will never let a murderer escape justice—whether his victim was royalty or the lowest of the low.