Francis Vivian was born Arthur Ernest Ashley in 1906 at East Retford, Nottinghamshire. He was the younger brother of noted photographer Hallam Ashley. Vivian laboured for a decade as a painter and decorator before becoming an author of popular fiction in 1932. In 1940 he married schoolteacher Dorothy Wallwork, and the couple had a daughter. After the Second World War he became assistant editor at the Nottinghamshire Free Press and circuit lecturer on many subjects, ranging from crime to bee-keeping (the latter forming a major theme in the Inspector Knollis mystery The Singing Masons). A founding member of the Nottingham Writers’ Club, Vivian once awarded first prize in a writing competition to a young Alan Sillitoe, the future bestselling author. The ten Inspector Knollis mysteries were published between 1941 and 1956. In the novels, ingenious plotting and fair play are paramount. A colleague recalled that ‘the reader could always arrive at a correct solution from the given data. Inspector Knollis never picked up an undisclosed clue which, it was later revealed, held the solution to the mystery all along.’ Francis Vivian died on April 2, 1979 at the age of 73. (Source: Dean Street Press)

His series detectives are Insp. John Burnell, Sgt. Ronnie Drew and in most of his novels Insp. Gordon Knollis. (Gadetection) 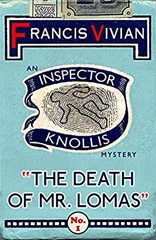 Francis Vivian is another Golden Age author now making a comeback in new editions designed to bring Golden Age classics to a new generation of readers. From the 1930s through the 1950s, Vivian wrote eighteen mysteries. Ten of them featured Inspector Knollis as the primary investigator, the first of those being The Death of Mr. Lomas. Knollis is an interesting and empathetic character with a quiet and sometimes mischievous sense of humor. But he also knows when – and how – to press an advantage and uncover the truth of what may seem at first to be meaningless or inexplicable clues. It is worth noting that the inspector shares the clues that he discovers with the reader (though not always his interpretation of those clues). In other words, his mysteries definitely include some of that battle of the wits that so many readers of traditional mysteries do enjoy. Mystery historian and author Curtis Evans has provided an introduction to this new edition from Dean Street Press offering more background on Francis Vivian and his books. (Source: Classic Mysteries)