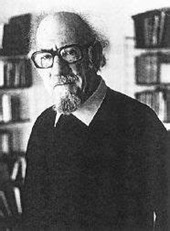 Julian Gustave Symons (originally Gustave Julian Symons) (30 May 1912 – 19 November 1994) was a British crime writer and poet. He also wrote social and military history, biography and studies of literature. He was born in Clapham, London and died in Walmer, Kent.

Julian Symons was born in London to a Russian or Polish-born father (Alphonse Maurice Brann) and an English mother (Minnie) of French and Spanish antecedents. He was a younger brother, and later the biographer, of writer A. J. A. Symons. He left school at 14. He founded the poetry magazine Twentieth Century Verse in 1937, editing it for two years. “He turned to crime writing in a light–hearted way before the war and soon afterwards established himself as a leading exponent of it, though his use of irony to show the violence behind the respectable masks of society place many of his books on the level of the orthodox novel.” As an early Trotskyist, he applied for recognition as an anti-capitalist conscientious objector in World War II, but was refused by his tribunal. He chose not to appeal, and ended up in the Royal Armoured Corps 1942 to 1944, when he was invalided out with a non-battle-related arm injury. After a period as an advertising copywriter, he became a full-time writer in 1947. During his career he won two Edgar Awards from the Mystery Writers of America and, in 1982, received the MWA’s Grand Master Award. Symons served as the president of the Detection Club from 1976 till 1985.

Symons’s 1972 book Bloody Murder: From the Detective Story to the Crime Novel (published as Mortal Consequences in the US) is one of the best-known critical works in the field of crime fiction. Revised editions were published in 1985, 1992 and finally in 1994. Symons highlighted the distinction between the classic puzzler mystery, associated with such writers as Agatha Christie and John Dickson Carr, and the more modern “crime novel,” which puts emphasis on psychology and motivation.

Symons published over thirty crime novels and story collections between 1945 and 1994. His works combined elements of both the detective story and the crime novel, but leaned clearly toward the latter, with an emphasis on character and psychology which anticipated later crime fiction writers such as Ruth Rendell and P.D. James. His novels tend to focus on ordinary people drawn into a murderous chain of events; the intricate plots are often spiced with black humour. Novels typical of his style include The Colour of Murder (1957), the Edgar-winning The Progress of a Crime (1960), The Man Whose Dreams Came True (1968), The Man Who Lost His Wife (1970) and The Plot Against Roger Ryder (1973). (From Wikipedia). He won two Edgar Awards from the Mystery Writers of America, from 1958 he was chairman of the Crime Writers Association and, from 1976 to 1985, succeeded Agatha Christie as president of the Detection Club.

He [Julian Symons] will probably be best remembered as a critic, but in truth his range was astonishing – he was a poet, biographer and social historian, as well as author of some of the best British crime novels of the post-war era. The End of Solomon Grundy, Progress of a Crime, and (a special favourite of mine for its sheer entertainment value)The Man Whose Dreams Came True, were all excellent, and his other novels were never less than interesting. Some of his books focus on social attitudes, but he had read so widely in the genre that his twisty plotting was of a very high quality. The Plot Against Roger Rider is ingenious, and Sweet Adelaide shows his insight into true crime cases. A very late book, Death’s Darkest Face, was among his finest achievements, although sadly, it has never attracted the attention it deserved. Anyone keen on British crime fiction who is unfamiliar with his work has a real treat in store. (Martin Edwards at ‘Do You Write Under Your Own Name?’)

Further reading: In Praise of… Julian Symons by Xavier Lerchard

John Wilkins meets a beautiful, irresistible girl, and his world is turned upside down. Looking at his wife, and thinking of the girl, everything turns red before his eyes – the colour of murder. But did he really commit the heinous crime he was accused of? Told innovatively in two parts: the psychiatric assessment of Wilkins and the trial for suspected murder on the Brighton seafront, Symons’ award-winning mystery tantalizes the reader with glimpses of the elusive truth and makes a daring exploration of the nature of justice itself. (British Library Crime Classics)

The Colour of Murder was one of the most acclaimed British novels of the 1950s. On publication, it received a rapturous reception from the critics, and it won the prize given by the Crime Writers’ Association for the best crime novel of the year n 1957; then called the Crossed Red Herring prize, it is now known as the CWA Gold Dagger.

At that time, the book seemed highly contemporary, with its focus on the psychological make-up of a man accused of murder. Today, more than sixty years later, it is also of interest in the way it documents British social history. The Colour of Murder remains a crisply written and highly readable novel, with a clever plot, even if it is very different from the cerebral whodunits that were in vogue during the Golden Age of Murder between the world wars. (From Martin Edwards Introduction to the recent issue of The Colour of Murder, British Library Crime Classics, 2019)

The Colour of Murder has been reviewed, among others, at ‘Do You Write Under Your Own Name?’ Books Please, CrossExaminingCrime, Mysteries Ahoy! Crime Review UK, The Invisible Event, In Search of the Classic Mystery Novel, and Northern Reader.

Captain Robert McNair Wilson MB, ChB (22 May 1882 Maryhill, Glasgow – 29 November 1963 New Forest, Hampshire), was a British surgeon, writer and journalist and Liberal Party politician. Wilson was the son of William Wilson and Helen Turner. He was educated at Glasgow Academy and Glasgow University. On 7th December 1905 in Alnwick, Northumberland he married Winifred Paynter. They had three sons. He then married Doris May Fischel. They had two sons. Wilson was House Surgeon Glasgow Western Infirmary. He was Medical Correspondent of the Times from 1914–1942. He also wrote detective fiction under the pseudonym of Anthony Wynne and a novel under the pseudonym Harry Colindale. (Source: Wikipedia)

Under the pseudonym Anthony Wynne, he wrote a series of twenty-seven detective novels between the years 1925 and 1950.  . . . . Anthony Wynne’s detective novels have been out of print for sixty years, but some retain interest today. Along with John Dickson Carr, Wynne was one of the most prominent Golden Age practitioners of the locked room mystery. Unfortunately, his novels often tend to be overly melodramatic, thinly characterized and humorless, no doubt in part explaining their obscurity today. One of the best Anthony Wynne detective novels, Murder of a Lady (The Silver Scale Mystery in the United States), deserves reprinting, however. Set in Scotland, where Wynne himself grew into adulthood, Murder of a Lady benefits from strong atmosphere (with supernatural overtones), some compelling characters and emotional entanglements, a baffling and suspenseful problem and a plausible enough solution. Keep reading here.

Anthony Wynne’s detective novels have been out of print for sixty years, but some retain interest today. (Curtis Evans). However Murder of a Lady aka The Silver Scale Mystery (1931) has been recently rescued from oblivion by The British Library (2016) and Martin Edwards.

Duchlan Castle is a gloomy, forbidding place in the Scottish Highlands. Late one night the body of Mary Gregor, sister of the laird of Duchlan, is found in the castle. She has been stabbed to death in her bedroom – but the room is locked from within and the windows are barred. The only tiny clue to the culprit is a silver fish’s scale, left on the floor next to Mary’s body. Inspector Dundas is dispatched to Duchlan to investigate the case. The Gregor family and their servants are quick – perhaps too quick – to explain that Mary was a kind and charitable woman. Dundas uncovers a more complex truth, and the cruel character of the dead woman continues to pervade the house after her death. Soon further deaths, equally impossible, occur, and the atmosphere grows ever darker. Superstitious locals believe that fish creatures from the nearby waters are responsible; but luckily for Inspector Dundas, the gifted amateur sleuth Eustace Hailey is on the scene, and unravels a more logical solution to this most fiendish of plots. Anthony Wynne wrote some of the best locked-room mysteries from the golden age of British crime fiction. This cunningly plotted novel – one of Wynne’s finest – has never been reprinted since 1931, and is long overdue for rediscovery. (The British Library Crime Classics).

Murder of a Lady has been reviewed, among others, at Mystery*File, Beneath the Stains of Time, ‘Do You Write Under Your Own Name?’, CrossExamingCrime, In Search of the Classic Mystery Novel, His Futile Preoccupations …, Northern Reader, The Invisible Event and Vintage Pop Fictions.