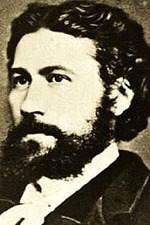 Émile Gaboriau (9 November 1832 – 28 September 1873) was a French writer, novelist, journalist, and a pioneer of detective fiction.

Gaboriau was born in the small town of Saujon, Charente-Maritime. He was the son of Charles Gabriel Gaboriau, a public official and his mother was Marguerite Stéphanie Gaboriau. He became a secretary to Paul Féval, and after publishing some novels and miscellaneous writings, found his real gift in L’Affaire Lerouge (1866).

L’Affaire Lerouge , which was Gaboriau’s first detective novel, introduced an amateur detective. It also introduced a young police officer named Lecoq, who was the hero in three of Gaboriau’s later detective novels [namely Le Crime d’Orcival (1866), Le Dossier No. 113 (1867) and Monsieur Lecoq (1868)]. The character of Lecoq was based on a real-life thief turned police officer, Eugène François Vidocq (1775-1857), whose own memoirs, Les Vrais Mémoires de Vidocq (1828), mixed fiction and fact. It may also have been influenced by the villainous Monsieur Lecoq, one of the main protagonists of Feval’s Les Habits Noirs book series.

L’Affaire Lerouge was published serialised in the Pays in 1863 and at once made his reputation. The story was produced on the stage in 1872. A long series of novels dealing with the annals of the police court followed, and proved very popular. Gaboriau was a pioneer and a great success in his time until Arthur Conan Doyle created Sherlock Holmes which diverted global attention from his Monsieur Lecoq. Gaboriau died in Paris of pulmonary apoplexy on the 28th of September 1873.

Gaboriau influenced later detective fiction writers, notably Conan Doyle, who acknowledged his debt to Gaboriau. Conan Doyle wrote, ‘Gaboriau had rather attracted me by the neat dovetailing of his plots, and Poe’s masterful detective, M. Dupin, had from boyhood been one of my heroes. But could I bring an addition of my own?’ Conan Doyle also uses Gaboriau’s two-part structure for two of the four longer Sherlock Holmes stories. Holmes’s skill in the art of disguise is equal to that of Lecoq. Liebow observes that there is a startling similarity between Holmes and Lecoq’s speech, conduct, and meditations. However, Holmes denigrates Lecoq in A Study in Scarlet, dismissing him as a ‘miserable bungler.’ Gaboriau was also an influence on John Russell Coryell, who read his works. His detective, Nick Carter, follows in Lecoq and Tabaret’s footsteps.

In Gaboriau’s “Une Disparition”, (“A Disappearance” or “Missing!”), written perhaps in 1870, police officers track a businessman who disappeared, with the same enthusiasm and skill they tracked murder suspects in Monsieur Lecoq. This story also shows the same mentor relationships among the Paris police as the novel did: there Lecoq gets straightened out at the end by consulting Tirauclair; here the hero is similarly set right at the end by consulting Lecoq. This well done little tale does not greatly extend the detective technique of the novel, but it does take us into a more middle class world than the book, where all the suspects were either noblemen or lowlifes.
So does “Le Petit Vieux des Batignolles” (1870), (“The Little Old Man of Batignolles”), Gaboriau’s other main detective short story. This tale does have a puzzle plot. Gaboriau leads his readers into an intricate maze where nothing is as it seems. Every clue or apparent deduction is immediately contradicted by something else, and the detectives find it hard to come up with any theory that explains all the facts. This sort of “overload” approach will later be used by Baroness Orczy. There is also a “paradoxical” feel to the tale; Gaboriau takes delight in each clue pointing to its apparent direct opposite. Gaboriau also shows how a clue can be interpreted in many different ways.
The scenes early in the story, where the young doctor narrator meets the policeman M. Mechinet, and is invited by him to join him on a murder case, seem directly anticipatory of Dr. Watson’s meeting of Sherlock Holmes, in “A Study in Scarlet” (1887). Behind both Gaboriau and Doyle stands Edgar Allan Poe, and the meeting of the narrator and Dupin in “The Murders in the Rue Morgue” (1841).
“The Little Old Man of Batignolles” is reprinted in English translation in E.F. Bleiler’s anthology A Treasury of Victorian Detective Stories (1979). The tale was made into an hour-long film for television in 2009, by famed French director Claude Chabrol.

Julian Symons, in Bloody Murder. From the Detective Story to the Crime Novel: A History (Penguin Books, 1974. Page 57-58), wrote:

In Monsieur Lecoq the detective in disguise pursues the murderer on an immense tour of Paris. He conducts a search of a grand mansion but goes away baffled, unable to believe that the nobleman who receives him with weary courtesy is the man he wants. Much of this is tiresome today, but there are compensations other than the passages of detection, in the accurate and interesting accounts of aspects of the French legal system, and the battles of wits in the dialogues between examining magistrate and accused, from which Simenon probably learned something. And in Monsieur Lecoq, the best of the novels, Lecoq plays a fascinating game of cat and mouse with the prisoner, which ends with his realization that somehow he has been betrayed, and that the mouse knows exactly what the cat is doing. This is the best of the novels: but “Le Petit Vieux de[s] Batignolles” is undoubtedly his finest piece of work, …..

Join 292 other followers
Follow A Crime is Afoot on WordPress.com