Rex Todhunter Stout (December 1, 1886 – October 27, 1975) was an American writer noted for his detective fiction. His best-known characters are the detective Nero Wolfe and his assistant Archie Goodwin, who were featured in 33 novels and 39 novellas between 1934 and 1975. In 1959, Stout received the Mystery Writers of America’s Grand Master Award. The Nero Wolfe corpus was nominated Best Mystery Series of the Century at Bouchercon XXXI, the world’s largest mystery convention, and Rex Stout was nominated Best Mystery Writer of the Century. In addition to writing fiction, Stout was a prominent public intellectual for decades. Stout was active in the early years of the American Civil Liberties Union and a founder of the Vanguard Press. He served as head of the Writers’ War Board during World War II, became a radio celebrity through his numerous broadcasts, and was later active in promoting world federalism. He was the long-time president of the Authors Guild, during which he sought to benefit authors by lobbying for reform of the domestic and international copyright laws, and served a term as president of the Mystery Writers of America.

Rex Stout began his literary career in the 1910s writing for magazines, particularly pulp magazines, writing more than 40 stories that appeared between 1912 and 1918. Stout’s early stories appeared most frequently in All-Story Magazine and its affiliates, but he was also published in Smith’s Magazine, Lippincott’s Monthly Magazine, Short Stories, The Smart Set, Young’s Magazine, and Golfers’ Magazine. The early stories spanned genres including romance, adventure, science fiction/fantasy, and detective fiction, including two serialized murder mystery novellas that prefigured elements of the Wolfe stories. In the 1930s, Stout turned to writing detective fiction. In 1933–34, he wrote Fer-de-Lance, which introduced Nero Wolfe and his assistant Archie Goodwin. The novel was published by Farrar & Rinehart in October 1934, and in abridged form as “Point of Death” in The American Magazine (November 1934). The characters of Wolfe and Goodwin are considered among Stout’s main contributions to detective fiction. Wolfe was described by reviewer Will Cuppy as “that Falstaff of detectives. (Source Wikipedia)

Rex Stout novels at The Grandest Game in the World

Mike Grost on Rex Stout: Rex Stout’s novels have a common basic pattern. There is some fairly upper class business, such as cooking, cattle breeding, or radio, in which most of the characters are employed. The characters are involved in a complex dispute, which leads to much negotiation and deal making. The deals are often changed and renegotiated, often with the help of detective Nero Wolfe. Interspersed with all of this is a mystery. The mystery plot has some simple trick solution, hopefully fairly clever. Starting in 1940, Stout also became a prolific author of mystery novellas, most of which were published in the slick American Magazine, or, after 1956, in the Saturday Evening Post. (Click here to continue reading)

Martin Edwards at ‘Do You Write Under Your Own Name?’: Of all the great American crime writers, Rex Stout has been something of a blind spot for me. Many years ago, Some Buried Caesar was strongly recommended to me, and I was underwhelmed. But he was an important figure in the genre, and I decided to give him another try. I opted for the first Nero Wolfe mystery, Fer-de-Lance, which dates from 1934. (Click here to continue reading)

Further reading: Rex Stout on Writing at The Passing Tramp.

Fer-de-Lance is the first Nero Wolfe detective novel written by Rex Stout, published in 1934 by Farrar & Rinehart, Inc. The novel appeared in abridged form in The American Magazine (November 1934) under the title “Point of Death”. The novel was adapted for the 1936 movie Meet Nero Wolfe. In his seminal 1941 work, Murder for Pleasure, crime fiction historian Howard Haycraft included Fer-de-Lance in his definitive list of the most influential works of mystery fiction. (Source: Wikipedia)

Book Description: As any herpetologist will tell you, the fer-de-lance is among the most dreaded snakes known to man.  When someone makes a present of one to Nero Wolfe, Archie Goodwin knows he’s getting dreadully close to solving the devilishly clever murders of an immigrant and a college president.  As for Wolfe, he’s playing snake charmer in a case with more twists than an anaconda — whistling a seductive tune he hopes will catch a killer who’s still got poison in his heart. (Source: Random House)

Fer-de-Lance has been reviewed, among others, at  Classic Mysteries, Bitter Tea and Mystery, Mystery File, and ‘Do You Write Under Your Own Name?’

Let me once again come back to this author (my blog post is here) to include him on my blog entries regarding the biographies of authors who helped shape our favourite genre; even though he is known for one single story. 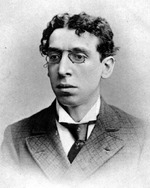 Israel Zangwill (21 January 1864 – 1 August 1926) was a British humourist and writer. He was born in London in a family of Jewish immigrants from Czarist Russia, to Moses Zangwill from what is now Latvia and Ellen Hannah Marks Zangwill from what is now Poland. He dedicated his life to championing the cause of the oppressed. Jewish emancipation, women’s suffrage, assimilationism, territorialism and Zionism (a Jewish liberation movement) were all fertile fields for his pen. His brother was also a writer, the novelist Louis Zangwill, and his son was the prominent British psychologist, Oliver Zangwill.

Zangwill received his early schooling in Plymouth and Bristol. When he was nine years old Zangwill was enrolled in the Jews’ Free School in Spitalfields in east London, a school for Jewish immigrant children. The school offered a strict course of both secular and religious studies while supplying clothing, food, and health care for the scholars; today one of its four houses is named Zangwill in his honour. At this school young Israel excelled and even taught part-time, moving up to become a full-fledged teacher. While teaching, he studied for his degree in 1884 from the University of London, earning a BA with triple honours.

Zangwill married Edith Ayrton, a gentile feminist and author who was the daughter of cousins Matilda Chaplin and William Edward Ayrton. In later life, his friends included well known Victorian writers such as Jerome K. Jerome and H. G. Wells.

In 1881, his short story “Professor Grimmer” won a literary contest, and his career as a short story writer and novelist was launched. Zangwill published his first book, Motza Kleis (1882), anonymously. The work, which was later included in his most famous novel, Children of the Ghetto (1892), used Yiddish expressions to paint a portrait of London’s Jewish East End. It was in these years when he wrote and published his first and only mystery novel, to my knowledge, The Big Bow Mystery, the first novella-length locked-room puzzle. It has been almost continuously in print since 1891 and has been used as the basis for three commercial films. In the 1880s, Zangwill published under the name J. Freeman Bell and “Marshallik.” He wrote columns for Jewish periodicals as well as The Idler. With the publication of Children of the Ghetto, Zangwill became a literary celebrity. His other collections that specifically treat Jewish themes include Ghetto Tragedies (1893), Dreamers of the Ghetto (1898), and Ghetto Comedies (1907).

At the turn of the century, Zangwill became actively involved in political movements such as Zionism and women’s suffrage. A member of the group the “wanderers of Kilburn,” he befriended other important Jewish intellectuals of his day, including Solomon Schechter and Solomon J. Solomon. He was a noted playwright, and his dramas from this period include The Melting Pot (1908). Zangwill also founded the Jewish Territorial Organization (the ITO), whose goal was to find and establish a Jewish homeland wherever possible. As part of the ITO, Zangwill helped engineer the Galveston Plan, which allowed 10,000 Jewish people to immigrate to the United States between 1907 and 1914. He ultimately broke with political Zionism and died in 1926. Several of Zangwill’s works are available from Project Gutenberg. (Several sources)

The Big Bow Mystery is an 1892 mystery novel by the British writer Israel Zangwill. It was originally serialised in The Star newspaper in 1891, before being published as a novel the following year. Set in London’s East End, it is one of the earliest examples of the Locked-room mystery genre. The story served as the basis for three Hollywood film versions. The The Perfect Crime (1928) and The Crime Doctor (1934) were both set in the contemporary United States, while The Verdict (1946) returned the story to the late-Victorian London setting of the original novel. (Source: Wikipedia)

Zangwill’s classic novella “The Big Bow Mystery” (1891) is the flagship of the modern locked room story. In these tales, a crime is committed in a room that is locked from the inside. How could any murderer have committed this crime, and then escaped? It seems impossible. This sort of puzzle is one of the main categories of modern mystery fiction. Writers have devoted considerable ingenuity to developing solutions to the locked room murder. Locked room puzzles climax with the work of John Dickson Carr. A full detailed history of locked room fiction can be found in Robert C. S. Adey’s Locked Room Murders and Other Impossible Crimes. This book contains a bibliography, listing over 2,000 impossible crime novels and short stories.  (A Guide to Classic Mystery and Detection by Mike Grost)

Further reading: “A Tongue-in-Cheek Assessment of The Big Bow Mystery by the Author Himself,” by Mike Gray (Ontos) 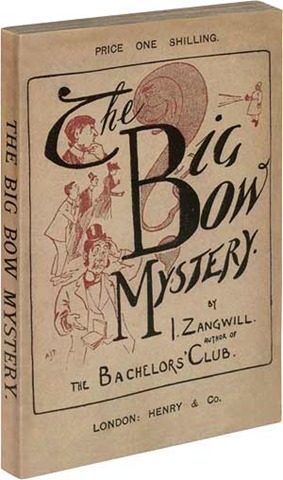 Book Description: The first in a new series of classic detective stories from the vaults of HarperCollins is the world’s first locked-room mystery, a seemingly impossible crime story as powerful as any that have copied the scenario since. “The Detective Story Club”, launched by Collins in 1929, was a clearing house for the best and most ingenious crime stories of the age, chosen by a select committee of experts. Now, almost 90 years later, these books are the classics of the Golden Age, republished at last with the same popular cover designs that appealed to their original readers. Originally published as The Big Bow Mystery in 1891, and re-published by the Detective Club to coincide with a new film version called ‘The Perfect Crime’, Israel Zangwill’s novel invented the concept of the ‘locked room mystery’ and influenced almost every crime writer thereafter. ‘A man is murdered for no apparent reason. He has no enemies and there seemed to be no motive for anyone murdering him. No clues remained and the instrument with which the murder was committed could not be traced. The door of the room in which the body was discovered was locked and bolted on the inside, both windows were latched, and there was no trace of any intruder. The greatest detectives in the land were puzzled. Here indeed was the perfect crime, the work of a master mind. Can you solve the problem which baffled Scotland Yard for so long, until at last the missing link in the chain of evidence was revealed?’ This new edition includes a brand new introduction by the Golden Age crime expert, Dr John Curran, author of ‘Agatha Christie’s Secret Notebooks’. (HarperCollinsPublishers UK publicity page)

From the introduction by John Curran: [The Big Bow Mystery] is more socially aware than many of its contemporaries. Two of the main characters are closely involved with the labour movement and a detail picture of the social conditions of London’s East End an its denizens is conveyed through the characters and their circumstances.