Eric Elrington Addis, aka ‘Peter Drax’, was born on 19 May 1899 in Edinburgh, Scotland, the youngest child of a retired Indian civil servant and the daughter of an officer in the British Indian Army. Drax attended Edinburgh University, and served in the Royal Navy, retiring in 1929 with the rank of Lieutenant-Commander. In the 1930s he began practising as a barrister focusing on admiralty law and divorce, but, recalled to the Navy upon the outbreak of the Second World War, he served on HMS Warspite and was mentioned in dispatches at the Second Battle of Narvik. When Drax was killed in action on 31 August 1941 after having been mortally wounded in an air raid on the British Royal Navy base at Alexandria, Egypt, he left a wife and two children.

Together the Drax novels constitute one of the most important bodies of realistic crime fiction published during the Golden Age.  Rather than the artificial and outsize master sleuths and super crooks found in so many classic mysteries from the Golden Age, Drax’s novels concern, as contemporary publicity material for the books put it, “police who are not endowed with supernatural powers and crooks who are also human.”  They are, in other words, books about “real” people. (Curtis Evans at The Passing Tramp). 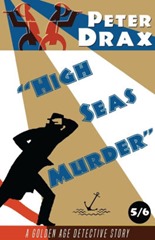 ‘There’s been a murder there.’

Tubby stared at him. ‘A murder! Who was it?’

It was the first time in his life that Tubby had been told that he had been murdered.

Carl Swanson, recognized as the best ship’s captain in the fishing town of Gilsboro, is about to head out on the unluckiest trip of his career. When he decided to engage with Captain MacTaggert’s ship the Ivanhoe, murder is committed, and Inspector Pollitt and his able lieutenants begin the inexorable process of investigation – and arrest.

High Seas Murder was first published in 1939, and has remained out of print until this new edition. It includes an introduction by crime fiction historian Curtis Evans. (Source: Dean Street Press).

High Seas Murder has been reviewed, among others, at ‘Do You Write Under Your Own Name?’, Northern Reader, and Beneath the Stains of Time.