Lillian de la Torre Bueno McCue (née Bueno; pen name, Lillian de la Torre; 1902 – September 13, 1993) was an American novelist and a prolific writer of historical mysteries. She served as President of the Mystery Writers of America. Born in Manhattan in 1902, de la Torre received master’s degrees from Columbia University and Harvard. Her first novel was Elizabeth Is Missing, or Truth Triumphant, published by Knopf in 1945. Her most popular works were the Dr. Sam: Johnson, Detector series of 33 detective stories that cast 18th century literary figures Samuel Johnson and James Boswell into Sherlock Holmes and Dr. Watson roles. This series, which de la Torre began in 1943 with The Great Seal of England, is one of the earliest examples of the historical mystery, a literary genre which combines historical fiction and the whodunit/detective story. She also wrote numerous books, short stories for Ellery Queen’s Mystery Magazine, reviews for The New York Times Book Review, poetry and plays. Her play Goodbye, Miss Lizzie Borden was adapted as the episode “The Older Sister” for Alfred Hitchcock Presents. She was a President of the Mystery Writers of America, and was nominated for an Edgar Award for Best Fact Crime for The Truth about Belle Gunness (1955). She died in 1993 at the age of 91. She was predeceased by her husband George McCue. (Source: Wikipedia)

As a child, Lillian de la Torre Bueno McCue became fascinated with detective stories shelved in her father’s library and later could hardly recall a time when she was not “addicted.” She did not, however, begin writing until her middle years, when she began to speculate about how Samuel Johnson might have approached mysteries of his era. Describing herself as a histo-detector, McCue used scholarly research to delve into old crimes and scandals, especially those in 18th-century Britain, and arrive at her own modern solutions. In related work, she also took real people and events and wove them into fictionalized plots. Her first book Elizabeth Is Missing or Truth Triumphant dismissed 12 theories on the famous 1753 disappearance of Elizabeth Canning , a maidservant near the Tower of London, and offered the author’s own. McCue had combined, said The New York Time s’ reviewer, “the scholarly patience of a candidate for a Ph.D.” with the “ingenuity of a Nero Wolfe.” She followed with a similar book, Villainy Detected (1947). But her most popular fiction comprised a series of short stories about Samuel Johnson and James Boswell under the title Dr. Sam: Johnson, Detector. A founding member of the Colorado Springs Chorale and a former president of the Mystery Writers of America, McCue wrote for nearly 50 years and was working on a manuscript at the time of her death. (Source: Encyclopedia.com)

More information may be found in her obituary in the New York Times. A bibliography of works may be found at Fantastic Fiction web site.

Lillian de la Torre’s short stories about Dr. Sam Johnson are the ancestors of much of today’s historical mystery fiction. Real life personages and events are often woven into these stories, and there is a great deal of historical atmosphere and dialogue. Unusual aspects of 18th Century law enforcement are often worked into the tales. The cleverest puzzle plot in the series is “The Stroke of Thirteen” (1953). This tale has affinities to the impossible crime school. It does not deal with a locked room or other physical impossibility; instead it deals with events which seem to be absurd, and gives them an ultimately logical explanation. The elaborate complexity of the plot in this tale recalls Ellery Queen, who published de la Torre’s stories in EQMM. (Mike Grost on Lillian de la Torre). 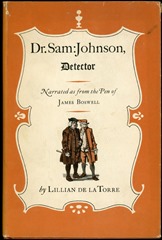 Nine mystery tales starring lexicographer Dr. Samuel Johnson in “the finest series of historical detective stories ever written” (Ellery Queen)
For over two hundred years, devotees of English literature have lost themselves in James Boswell’s Life of Johnson, a biography of the great eighteenth-century thinker and writer, chronicling everything from kitchen chemistry experiments to tackling a pickpocket to his legendary investigation of the Cock Lane ghost. But Dr. Sam Johnson was more than a great thinker—he was also a talented sleuth.
From the chilling affair of the waxwork cadaver to the thrilling search for the stolen seal of England, the nine cases in this volume show Johnson at his very best—using his legendary intellect to apprehend the worst killers and thieves the era had to offer.
Written by Lillian de la Torre, a mystery author with “a finely tuned ear for eighteenth-century prose,” these charming stories are so believable, so perfectly in keeping with the Dr. Johnson we know and love, it’s hard to believe they aren’t true (The New York Times). (Source: Mysterious Press)

The whole first collection, Dr. Sam: Johnson, Detector, is especially charming as a historical work. The tales’ events are often colorful, and de la Torre is a superb prose stylist with a grasp of the possibilities of 18th Century English usage. In some ways, it might be best just to recommend the whole collection. Still the tales are very different from each other, and vary in their success as mystery and historical works. (Mike Grost) 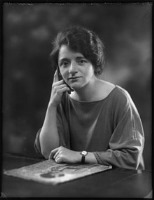 Ellen Cicely Wilkinson PC (8 October 1891 – 6 February 1947) was a British Labour Party politician who served as Minister of Education from July 1945 until her death. As the Member of Parliament (MP) for Jarrow, she became a national figure when, in 1936, she figured prominently in the Jarrow March of the town’s unemployed to London, to petition for the right to work. Although unsuccessful at the time, the march provided an iconic image for the 1930s, and helped to form post-Second World War attitudes to unemployment and social justice.

Wilkinson was born into a poor though ambitious Manchester family, and embraced socialism at an early age. After graduating from the University of Manchester she worked for a women’s suffrage organisation and later as a trade union officer. Inspired by the Russian Revolution of 1917, Wilkinson joined the British Communist Party, and preached revolutionary socialism while seeking constitutional routes to political power through the Labour Party. She was elected Labour MP for Middlesbrough East in 1924, and supported the 1926 General Strike. In the 1929–31 Labour government she served as Parliamentary Private Secretary to the junior Health Minister. Following her defeat at Middlesbrough in 1931, Wilkinson became a prolific journalist and writer before returning to parliament as Jarrow’s MP in 1935. She was a strong advocate for the Republican faction in the Spanish Civil War, and made several visits to the battle zones.

During the Second World War Wilkinson served in Churchill’s wartime coalition as a junior minister, mainly at the Ministry of Home Security where she worked under Herbert Morrison. She supported Morrison’s attempts to replace Clement Attlee as the Labour Party’s leader; nevertheless, when he formed his postwar government Attlee appointed Wilkinson as Minister of Education. By this time her health was poor, the legacy of years of overwork. She saw her main task in office as the implementation of the wartime coalition’s 1944 Education Act, rather than the more radical introduction of comprehensive schools favoured by many in the Labour Party. Much of her energy was applied to organising the raising of the school leaving age from 14 to 15. In the exceptionally cold English winter of 1946–47, she succumbed to a bronchial disease, and died after an overdose of medication which the coroner at her inquest declared was accidental. (Source: Wikipedia).

The Division Bell Mystery (1932) is the only detective novel of Ellen Wilkinson. It reminds one of the work of the Coles. Like the Coles, Wilkinson was active in left wing politics – she was a Labour M.P. for over twenty years in Britain. Her book has the satiric tone of the Coles’ work, and its focus on members of the British high life. There is a sly sense in both the Coles and Wilkinson that the British ruling classes are full of eccentrics that shouldn’t be allowed to run a small firm, yet alone a great country. Also that they are quite willing to cover up the most outrageous messes. (Mike Grost at A Guide to Classic Mystery and Detection. Continue reading the full text here)

After losing her seat at Middlesbrough East, Wilkinson published The Division Bell Mystery. The mystery surrounding a rich financier’s murder stems from a supremely incompetent police investigation of the crime scene, but in the vivid writing, background colour and characterization there is ample compensation for a lack of ‘fair play’. The book’s enduring appeal is underlined by unexpected parallels between the society Wilkinson describes and British life in the twenty-first century. When she returned to Parliament, politics’ gain was detective fiction’s loss. (Martin Edwards, The Golden Age of Murder, Harper Collins, 2015. Page 262.)

Martin Edwards included Ellen Wilkinson’s The Division Bel Mystery in his book The Story of Classic Crime in 100 Books.

From Wikipedia: The Division Bell Mystery is a 1932 political murder mystery by Labour Party MP Ellen Wilkinson. A financier is found shot in the House of Commons. A young parliamentary private secretary turns amateur sleuth becoming smitten by the dead man’s gorgeous but enigmatic daughter.

Book Description: Originally published in 1932, this is the first Crime Classic novel written by an MP. And fittingly, the crime scene is within the House of Commons itself, in which a financier has been shot dead. Entreated by the financier’s daughter, a young parliamentary private secretary turns sleuth to find the identity of the murderer – the world of politics proving itself to be domain not only of lies and intrigue but also danger. Wilkinson’s own political career positioned her perfectly for this accurate but also sharply satirical novel of double cross and rivalries within the seat of the British Government. (Source: British Library Crime Classics) This new edition comes with an Introduction by Martin Edwards and Preface by Rachel Reeves MP.

The Division Bell Mystery has been reviewed, among others, at Golden Age of Detection Wiki, ‘Do You Write Under Your Own Name?’ Classic Mysteries, Cross-Examining Crime, Fiction Fan’s Book Reviews, Mysteries Ahoy!Happiness is a Warm Book, JacquiWine’s Journal, Books Please and Kaggsy’s Bookish Ramblings.