Lynn Brock (1877-1943) was the pseudonym of Alister McAllister, an Irish writer. He also wrote ‘straight’ novels as Anthony Wharton. McAllister was born in Dublin and educated at the National University of Ireland, where he became Chief Clerk. He served in British Intelligence and in the machine gun corps during WW1. Lynn Brock was one of the most popular and prolific detective novelists of the 1920s and 30s, famous for creating the detective character Colonel Gore, the first of which is The Deductions of Colonel Gore (1924). He won praise from fans and critics including Dorothy L. Sayers and T. S. Eliot. In 1932, however, Brock abandoned the formulaic Gore for a new kind of narrative, a ‘psychological thriller’ in the vein of Francis Iles’ recent sensation, Malice Aforethought. Advertised by Collins as ‘one of the most remarkable books that we have ever published’, the unconventional and doom-laden Nightmare provided readers with a disturbing portrayal of what it might take to turn an outwardly normal man into a cold-blooded murderer.

When Nightmare was first published in 1932, the TLS reviewer wrote, “Here is a thriller that ought to have been written by Poe. Every now and again Mr. Brock lives in the nightmare he has created by the trigonometry of detective fiction, and gives you a vivid glimpse of it that startles you into a gasp not only of horror but also of fervent admiration. Full justice to his subtle insight into character and contrasts of character could be done only by revealing the secrets of his plot, which is not permissible…. There is genius in Mr. Brock’s power of charging a moment with noises, colour and feeling until it seems more real than life.” (Source: The Neglected Books Page)

‘Three writers whose works have much in common, in conventional method and solid British flavor, are Lynn Brock (Allister McAllister, 1877 – ) with his Colonel Gore; J. J. Connington (Alfred Walter Stewrad, 1880 – ) with his Sir Clinton Driffield and The Counsellor; and A. E. Fielding (revealed surprisingly to be a woman, one Dorothy Fielding) and her inspector Pointer.’ (Howard Haycraft’s Murder for Pleasure, 1941). Consequently, since I’m interested in both, J. J. Connington and A. E. Fielding, I may also be interested in The Deductions of Colonel Gore, recently published in a brand new edition by Harper Collins Publishers.

Driven to madness by the cruelty of a small group of people, a young novelist sets about taking murderous revenge. Simon Whalley is an unsuccessful novelist who is gradually going to pieces under the strain of successive setbacks. Brooding over his troubles, and driven to despair by the cruelty of his neighbours, he decides to take his revenge in the only way he knows how – by planning to murder them . . .

Nightmare has been reviewed, among others, at ‘Do You Write Under Your Own Name?’ and Cross-Examining Crime,

Charles John Huffam Dickens was a writer and social critic who created some of the world’s best-known fictional characters and is regarded as the greatest novelist of the Victorian era. His works enjoyed unprecedented popularity during his lifetime, and by the twentieth century critics and scholars had recognised him as a literary genius. His novels and short stories enjoy lasting popularity.

Dickens left school to work in a factory when his father was incarcerated in a debtors’ prison. Despite his lack of formal education, he edited a weekly journal for 20 years, wrote 15 novels, five novellas, hundreds of short stories and non-fiction articles, lectured and performed extensively, was an indefatigable letter writer, and campaigned vigorously for children’s rights, education, and other social reforms. Dickens was regarded as the literary colossus of his age. His 1843 novella, A Christmas Carol, remains popular and continues to inspire adaptations in every artistic genre. Oliver Twist and Great Expectations are also frequently adapted, and, like many of his novels, evoke images of early Victorian London. His 1859 novel, A Tale of Two Cities, set in London and Paris, is his best-known work of historical fiction. Dickens’s creative genius has been praised by fellow writers—from Leo Tolstoy to George Orwell and G. K. Chesterton—for its realism, comedy, prose style, unique characterisations, and social criticism. On the other hand, Oscar Wilde, Henry James, and Virginia Woolf complained of a lack of psychological depth, loose writing, and a vein of saccharine sentimentalism. The term Dickensian is used to describe something that is reminiscent of Dickens and his writings, such as poor social conditions or comically repulsive characters.

On 8 June 1870, Dickens suffered another stroke at his home after a full day’s work on Edwin Drood. He never regained consciousness, and the next day he died at Gad’s Hill Place. Contrary to his wish to be buried at Rochester Cathedral “in an inexpensive, unostentatious, and strictly private manner,” he was laid to rest in the Poets’ Corner of Westminster Abbey. A printed epitaph circulated at the time of the funeral reads: “To the Memory of Charles Dickens (England’s most popular author) who died at his residence, Higham, near Rochester, Kent, 9 June 1870, aged 58 years. He was a sympathiser with the poor, the suffering, and the oppressed; and by his death, one of England’s greatest writers is lost to the world.” (From Wikipedia)

As Curtis Evans correctly reminds us at The Passing Tramp, for three decades, until the publication of Julian Symons’ Bloody Murder (1972), the primary popular mystery genre history was Howard Haycraft’s Murder for Pleasure (1941). Haycraft, after the first chapter on Edgar Allan Poe, devotes the second chapter to Gaboriau, Collins and Charles Dickens, and he finishes saying: ‘Gaboriau, Collins, Dickens. Each contributed something toward fictional detection. Jointly, they kept the form alive: saved the theme, perhaps, for premature extinction.’ If only for this reason, the name of Charles Dickens must be taken into account. 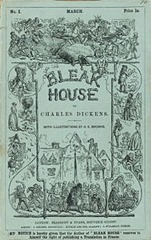 Bleak House, Dickens’s most daring experiment in the narration of a complex plot, challenges the reader to make connections – between the fashionable and the outcast, the beautiful and the ugly, the powerful and the victims. Nowhere in Dickens’s later novels is his attack on an uncaring society more imaginatively embodied, but nowhere either is the mixture of comedy and angry satire more deftly managed. Edited with an introduction and notes by Stephen Gill, Reader in English Literature, University of Oxford; Fellow and Tutor, Lincoln College, Oxford. (Oxford World’s Classics, 2008)

From Wikipedia: Bleak House is the ninth novel by Charles Dickens, published in 20 monthly parts between March 1852 and September 1853. The plot concerns a long-running legal dispute (Jarndyce and Jarndyce) which has far-reaching consequences for all involved. Dickens’s assault on the flaws of the British judiciary system is based in part on his own experiences as a law clerk. His harsh characterization of the slow, arcane Chancery law process gave voice to widespread frustration with the system, helping to set the stage for its eventual reform in the 1870s.

In Bleak House Dickens experimented with the device of dual narrators: an unnamed third-person narrator and the orphan Esther take turns to tell the story. The style is also remarkable: a hypnotic opening of three paragraphs without a complete sentence. The scope is probably the broadest Dickens ever attempted, ranging from the filthy slums to the landed aristocracy, in a narrative that is in equal parts satire and comedy. One character, Krook, dies of spontaneous human combustion.

Some critics, including George Gissing and G. K. Chesterton, take this to be Dickens’s best novel.