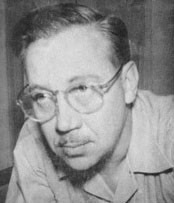 Stuart Palmer (1905–1968) was an American author of mysteries. Born in Baraboo, Wisconsin, Palmer worked a number of odd jobs—including apple picking, journalism, and copywriting—before publishing his first novel, the crime drama Ace of Jades, in 1931. It was with his second novel, however, that he established his writing career: The Penguin Pool Murder introduced Hildegarde Withers, a schoolmarm who, on a field trip to the New York Aquarium, discovers a dead body in the pool.

Withers was an immensely popular character, and went on to star in thirteen more novels, including Miss Withers Regrets (1947) and Nipped in the Bud (1951). A master of intricate plotting, Palmer found success writing for Hollywood, where several of his books, including The Penguin Pool Murder, were filmed by RKO Pictures Inc. (Source: Mysterious Press)

Stuart Palmer’s detective tales usually feature either Hildegarde Withers, a spinster sleuth, or, less frequently, Howie Rook, the least hard boiled of all private eyes. Palmer’s tales are generally comic in tone, but he is not a member of the “farce school” of Phoebe Atwood Taylor. Rather Palmer’s works adhere to the classical detective paradigms of the intuitionist school, of such writers as Agatha Christie and Ellery Queen. Reading Palmer’s best works show why this school is so well loved: watching Hildegarde Withers unravel “The Riddle of the Black Museum” (1946) is just plain fun. There is a detective, a mystery, and an ingenious solution, and one experiences a strong desire to read more stories like this. (Mike Grost)

As snow falls on the steps of the New York Public Library; a line of cars moves sluggishly down Fifth Avenue. Oblivious to the traffic, a blue Chrysler roadster tears down the street, hops the curb, and slams to a halt. The car is empty, its driver thrown half a block back. He is stone dead, his cigarette still burning, and a noose tied tight around his neck.

First on the scene is Detective Oscar Piper, followed closely by Hildegarde Withers, a schoolmarm with more than a passing interest in crime. They are a close-knit pair, and would have been married by now if murder didn’t keep getting in the way. Piper and Miss Withers must race across New York, attempting to learn how a man can be hanged while driving, and to do whatever it takes to keep his twin from suffering the same fate. (Source: Mysterious Press)

Murder on Wheels has been reviewed, among others, at A Guide to Classic Mystery and Detection, Beneath the Stains of Time, The Invisible Event, and Pretty Sinister Books.