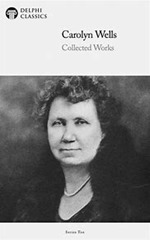 Carolyn Wells (18 June 1869, Rahway, New Jersey – 26 March 1942, New York, New York) was an American parodist and anthologist. A precocious child, Carolyn Wells hated formal schooling and refused to attend college. Scarlet fever, suffered at the age of six, caused her to become hard of hearing. Reared in New Jersey, she made her home in New York City after her marriage to Haldwin Houghton, of the Houghton Mifflin publishing clan. She loved puzzles, bridge, chess, charades, and detective stories (her discovery of a mystery by Anna Katharine Green was pivotal, inspiring her both to read voraciously and to write voluminously in that genre). Her literary career began almost by accident, with the contribution of jingles to humorous periodicals. She considered 1902 an important date in her career: by then she had written eight books and had begun composing juveniles; after this date she consistently published at least three or four books annually. From 1909 on she wrote mysteries, and she claimed in an autobiographical work (The Rest of My Life, 1937) to have written 170 books, including 70 detective stories—”so far.”

Her other main literary activity was as an anthologist, but she was also an important collector and bibliographer of the works of Walt Whitman. Her parody of Sinclair Lewis’ Main Street (Pto-maine Street, 1921), in which Carol Kennicott becomes Warble Petticoat, is funny and full of witty puns. Sometimes it misses its mark because both locale and social class are changed, but it wickedly refashions a number of episodes from the original.

Although also clearly limited by its time and place, Wells’ detective fiction holds up somewhat better. She claimed the title of “Dean of American Mystery Writers” and was widely considered an authority. The Technique of the Mystery Story (1913; revised 1929), heavily larded with quotations of both primary and secondary materials, is a thorough survey of the field, written for aspiring authors. Unfortunately, Wells’ own style is undistinguished; dialogue and dialect are often clumsily handled. Characterization is flat, characters often being hard to distinguish from each other. Her women are often irritatingly coy, shallowly coquettish ingenues—whom the reader is clearly expected to find charming—and she made it a rule that a woman could never be the murderer (though women were sometimes the victims in her stories). Although male figures are more varied, heroes and detectives are consistently well educated and wealthy. Plotting, however, is inventive, and Wells made interesting use of such conventional types as the “locked room” mystery.

Wells created a number of detectives, the best known and most frequently used (in 61 novels) being Fleming Stone, a professional detective who is a cultivated gentleman, moving easily in the elevated social circles in which Wells’ mysteries occur. He was her first creation (The Clue, 1909), and she continued to use him until the end of her career (Who Killed Caldwell?, 1942). Similar to Stone in characterization and methods of detection is Kenneth Carlisle, but he is distinguished by being a former screen star and matinee idol (in Sleeping Dogs, 1929, and two other novels). More interesting is the team of Pennington (“Penny”) Wise and Zizi (in The Man Who Fell Through the Earth, 1919, and five other novels). His approach to detection is rational while hers is intuitive; both are fallible, although Zizi is more often right. She is presented as a mysterious young sprite of a girl who seems to have no background or past. Wells’ other detectives are Lorimer Lane (in More Lives Than One, 1923, and another novel) and Alan Ford (in Faulkner’s Folly, 1917, and two other novels). Wells’ sleuths often work wonders of detection, but they occasionally err and thus illustrate her distaste, often expressed, for the “omniscient detective.”

Once well known and highly respected, Wells’s works now languish unread. She was too prolific, wrote too easily and rapidly, reflected her age too uncritically, and restricted herself too narrowly to popular genres and formulas. Her importance thus is largely historical, and is most clearly found in her practice of the detective novel. (Source: Excerpt from Encyclopedia.com)

Anybody But Anne does establish, that what we think of as a “typical Golden Age style mystery novel”, was in existence before what is often thought of as the official start of the Golden Age in 1920. It is also a fact, that Wells was American, and that her book is set in the United States: somewhere in New England. (Mike Grost)

Eccentric millionaire David Van Wyck has decided to pledge all his money away, leaving his wife Anne nothing but her jewelry to survive on. When David sees Anne flirting with an old high school friend during a weekend party at his mansion, Buttonwood Terrace, he decides to include Anne’s gems in his giveaway. David Wyck is found murdered the next morning in a locked-room and while suspicion initially points to Anne, it becomes apparent that several of Wyck’s guests had a motive for the crime. The narrator of the story, the guest Ann is in love with, prays that the culprit is ‘Anybody but Anne.’ In a structural twist, Detective Fleming Stone appears in the preamble and returns in the third act, book-ending the mystery, rather than merely appearing in the denouement. (Source: Goodreads)

Anybody But Anne has been reviewed, among others, at Mystery File, and Ontos.