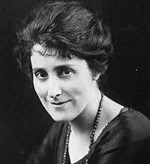 Clemence Dane was the pseudonym of Winifred Ashton (21 February 1888 – 28 March 1965), an English novelist and playwright. After completing her education, Dane went to Switzerland to work as a French tutor, but returned home after a year. She studied art in London and Germany. After the First World War, she taught at a girls’ school and began writing. She took the pseudonym “Clemence Dane” from the church, St Clement Danes on the Strand, London.

Dane began writing screenplays as well as novels. She co-wrote the screenplay for Anna Karenina, starring Greta Garbo. The pinnacle of Dane’s success was winning an Academy Award with Anthony Pelissier for the film Vacation from Marriage, released in the United Kingdom as Perfect Strangers, starring Robert Donat and Deborah Kerr as a married couple transformed by their experiences in the Second World War. Dane and Helen de Guerry Simpson wrote three detective novels featuring their creation, Sir John Saumarez. Both were members of the Detection Club. The first novel, Enter Sir John, was filmed by Alfred Hitchcock in 1930 as Murder!. Dane contributed to the Club’s serials The Scoop and The Floating Admiral. By the time of her death in London, on 28 March 1965, Dane had written more than 30 plays and 16 novels. (Excerpts from Wikipedia)

Clemence Dane and Helen Simpson were the Detection Club’s oddest couple. . . . The pair shared a publisher, and a plot idea donated to them by C. S. Evans, their editor, led them to write Enter Sir John. . . . After they had written three novels together, Dane’s interest in detective fiction waned, but Simpson’s grew. (Source: Martin Edwards The Golden Age of Murder)

From Wikipedia: Enter Sir John is a 1928 British crime novel by Clemence Dane and Helen Simpson. It concerns Martella Baring, a young actress, who is put on trial and convicted of murder and a fellow actor Sir John Saumarez who takes up her cause and tries to prove her innocence. It was followed by the sequel Re-enter Sir John in 1932. In 1930, the book was adapted into two films: Murder! and a German-language version Mary, both of which were directed by Alfred Hitchcock. A number of changes were made from novel to screen, such as making Sir John a member of the jury while in the book he was just a spectator at the trial. Many authors have incorrectly claimed the book was also adapted as a play, but there is no evidence for this assertion.

Synopsis: Young actress Martella Baring is convicted of the murder of Edna Druce, the wife of the acting company’s manager. The charmming and clever Sir John Saumarez, himself an actor and the manager of an acting company, attends the trial and becomes convinced of Martella’s innocence. He enlists the help of his stage manager and the stage manager’s wife, and Sir John proceeds to prove Martella’s innocence and save her from hanging for a crime she didn’t commit. (Source: Goodreads).

Enter Sir John has been reviewed, among others, at Golden Age of Detection Wiki, ‘Do You Write Under Your Own Name?’ The Passing Tramp, and Cross-Examining Crime.