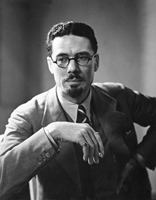 Val Henry Gielgud (born April 28, 1900 in London, England, UK; died November 30, 1981 in London, England, UK) was a English actor, writer, director and broadcaster. He was a pioneer of radio drama for the BBC, and also directed the first ever drama to be produced in the newer medium of television. Val Gielgud came of a theatrical family, being the brother of Sir John Gielgud (who appeared in several of his productions) and a great-nephew of the Victorian actress, Ellen Terry.

Following education at Oxford University, Gielgud began his career as a secretary to a Member of Parliament, before moving into writing when he took a job as the sub-editor of a comic book / magazine. It was this job that led him to work for the BBC’s own listings magazine, the Radio Times, as the assistant to the editor Eric Maschwitz. This was Gielgud’s first connection to the Corporation, and although he was not yet involved in any radio production, he often used his position at the magazine to make his thoughts on radio dramas felt: in his autobiography, he later confessed to having written several of the letters appearing on the magazine’s correspondence page, supposedly from listeners, criticising various aspects of the Corporation’s drama productions.

Maschwitz and Gielgud were close friends, and even wrote detective fiction together – Gielgud would later on go on to be responsible in whole or part for twenty-six detective / mystery novels, one short story collection, two historical novels, nineteen stage plays, four film screenplays, forty radio plays, seven non-fiction books and be the editor of a further two books.

Gielgud was married five times, the e first in 1921 while he was still an undergraduate at Oxford, where he married Nathalie Mamontov (1903–1969), daughter of Sergei Mamontov (1877—1938) and Nathalie Sheremetievskaya; her mother’s third husband was Grand Duke Michael, brother of Tsar Nicholas II. This lasted for only two years, however, and they divorced in 1926. His following three marriages, to Rita Vale, Monica Grey and Vivienne June Bailey, produced his only son, Adam Gielgud. He was the grandfather of choreographer Piers Gielgud. He published his autobiography in 1957, and died in 1981 at the age of eighty-one.

Gielgud and Maschwitz each enjoyed a long career in the media. . . . They wrote five novels together [Under London (1933), Death at Broadcasting House (1934), Death As An Extra (1935), Death in Budapest (1937), and The First Television Murder (1940)], and although Maschwitz is better remembered as lyricist …, Gielgud continued to write detective fiction, his final novel appearing as late as 1975. He collaborated successfully on radio plays with John Dickson Carr, collected more than sixty year after their first broadcast as 13 to the Gallows (ed. Tony Medawar, 2008). He also formed a fruitful relationship with Sayers, producing radio adaptation of her novels as well as her highly successful cycle radio plays The Man Born to Be King in 1941-2. (Martin Edwards, The Story of Classic Crime in 100 Books).

Published in the UK in 1934, Death At Broadcasting House (known as London Calling in the USA) is a British murder-mystery novel written by Val Gielgud – brother of John Gielgud and at that time the BBC’s Head of Productions – and “Holt Marvell” – actually Eric Maschwitz, a lyricist and writer for films and the BBC. The plot revolves round a live broadcast of a play, using multiple studios (as was common at the time). One actor has a scene by himself, at the end of which the script calls for him to be strangled: he plays this alone in a separate studio, but at the end of the play is discovered to have been strangled in reality. The book goes through all the usual procedures of a detective novel, tracking the motives and opportunities of the suspects. The book is of particular interest because the authors have been careful to keep it realistic: the exact layout of Broadcasting House is made use of (floor plans are provided) and the technique of radio drama is accurately represented: it does provide an intriguing glimpse into the workings of the BBC. The novel was adapted into a 1934 film directed by Reginald Denham, starring Ian Hunter, Austin Trevor, Lilian Oldland, and Val Gielgud himself as the drama producer.

Death at Broadcasting House has been reviewed, among others, at Golden Age of Detection Wiki, and ‘Do You Write Under Your Own Name?’. 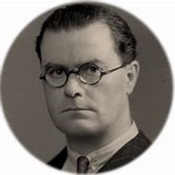 Archibald Gordon Macdonell (3 November 1895 – 16 January 1941) was a Scottish writer, journalist and broadcaster, whose most famous work is the gently satirical novel England, Their England (1933). Born in Poona, India, A. G. Macdonell’s family were Scottish. His father was a physician, and he was educated at Winchester where he excelled academically and at sports, representing the school at association football and golf. During World War I, he served for two years as a lieutenant of the Royal Field Artillery before being invalided out of the army, possibly because of shell shock. (Lieutenant Cameron, the protagonist of England, Their England is sent home for that reason.) The war had a profound effect on him, as it did with so many of his generation. Afterwards he spent two years in eastern Europe, firstly on the reconstruction of Poland, and then on famine relief in Russia. In 1922 he joined the League of Nations where he spent five years. Politically, he was a supporter of the Liberal Party. During 1923 and 1924 he unsuccessfully contested Lincoln as the Liberal candidate.

Macdonell made his living as a journalist in London, principally writing stage reviews for the London Mercury. In 1933, he became famous with the publication of England, Their England. The book gained considerable critical and popular acclaim, and won the James Tait Black Award that year. Today, Macdonell is remembered mostly for this one book. It is regarded as one of the classics of English humour and is much loved by readers for its evocation of England between the wars. It is particularly cherished by devotees of cricket for its famous description of the village cricket match. Although the rest of his books have been largely forgotten, several of them earned accolades during his lifetime. Macdonell was also a connoisseur of military history, and wrote a historical study called Napoleon and his Marshals (1934).

Archibald Gordon Macdonell (1895-1941), known popularly as A. G. Macdonell, wrote detective, adventure and military fiction under his own name and two pseudonyms. Macdonell began his writing career as a journalist, writing mostly theater reviews for London Mercury. In 1933 his novel England, Their England received the James Tait Black Memorial Prize, and it is this book for which he is most likely best remembered. Another satirical novel The Autobiography of a Cad (1938) has garnered something of a cult reputation lately. In addition to novels and a handful of plays he wrote at least one book on military history.

Macdonell also wrote six mystery novels under the name ‘Neil Gordon’, one of them,The Bleston Mystery (1928), in collaboration with Milward Kennedy. He also wrote under the pseudonym ‘John Cameron’.

Macdonell was a regular contributor to The Observer, and also a well-known broadcaster for the BBC Empire Service. He was a keen sportsman and a first-rate golfer, representing the Old Wykehamists on a number of occasions. He died suddenly in Oxford in 1941 at the age of 45. In his obituary, The Times called him “one of the leaders of the younger school of satirical novelists”. (Excerpts from Wikipedia)

The Factory on the Cliff has been reviewed at Cross-Examining Crime.

The Silent Murders has been reviewed, among others at Pretty Sinister Books, The Invisible Event, and The Grandest Game in the World

Writing under the pseudonym Neil Gordon, A. G. Macdonell wrote several crime and thriller novels. In the classic genre of ’20s and ’30s crime fiction, Macdonell managed to introduce a different element, unusual twists that keep the reader captivated and anxious to discover what came next. The Shakespeare Murders is another example of Macdonell’s carefully thought-through detective stories, where the detective is aided by the star of the cast. Peter Kerrigan saw a pickpocket take the wallet of a shabby little man, and with speed and precision he stole from the thief. Peter was a handsome gentleman-adventurer – not too scrupulous – and before he returned the pocketbook he read the letter which it contained. It was so that he heard of the million pound treasure, and began the search which was to lead him through so many horrors. At Marsh Manor he found the police trying to solve a murder, and lent somewhat grudging assistance; three more violent deaths followed rapidly. The working out of the solution to the mystery, and the final disposition of the treasure are brilliantly satisfying. The strictly logical framework of the book is filled in witty and entertaining fashion with strange and amusing characters. Macdonell uses his usual skill, well-dosed with ingenious twists, and a fast moving story-line, to keep the reader riveted to the book. Chase, conspiracy, and American gangsters add to the excitement of solving the Shakespeare riddle.(Source: Fantastic Fiction)

The Shakespeare Murders has been reviewed, among others, at Golden Age of Detection Wiki, Bedford Bookshelf, Happiness is a Warm Book, and Clothes in Books.