HarperCollins, Masterpiece Ed., 2010. Format: Kindle Edition. File Size: 548 KB. Print Length: 275 pages. ASIN: B0046A9N1C. eISBN: 9780062006707. First published in the UK by the Collins Crime Club on 6 November 1961, and in the US by Dodd, Mead and Company the following year. The novel features her novelist detective Ariadne Oliver as a minor character, and reflects in tone the supernatural novels of Dennis Wheatley who was then at the height of his popularity. 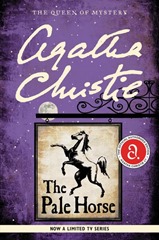 First sentence: The Espresso machine behind my shoulder hissed like an angry snake.

Synopsis: To understand the strange goings on at The Pale Horse Inn, Mark Easterbrook knew he had to begin at the beginning. But where exactly was the beginning? Was it the savage blow to the back of Father Gorman’s head? Or was it when the priest’s assailant searched him so roughly he tore the clergyman’s cassock? Or could it have been the priest’s visit, just minutes before, to a woman on her death bed? Or was there a deeper significance to the violent squabble which Mark Easterbrook had himself witnessed earlier? Wherever the beginning lies, Mark and his sidekick, Ginger Corrigan, may soon have cause to wish they’d never found it.

More about this story: The Pale Horse combined two ideas that Agatha Christie had been considering. One, a book “would start somehow with a list of names … “. The other reintroduced Christie’s earlier thoughts about “Voodoo etc., White Cocks, Arsenic? Childish stuff – work on the mind and what can the law do to you? Love Potions and Death Potions, – the aphrodisiac and the cup of poison. Nowadays we know better – Suggestion.”

This novel is notable among Christie’s books as it is credited with having saved at least two lives after readers recognised the symptoms of thallium poisoning from the description in the book. In 1975, Christie received a letter from a woman in Latin America who had thus saved a woman from slow poisoning by her husband and in 1977, a nurse who had been reading The Pale Horse correctly suggested that a baby in her care was suffering from thallium poisoning. In another instance, in 1971, a serial killer, Graham Frederick Young, who had poisoned several people, three fatally, was caught thanks to this book. A doctor conferring with Scotland Yard had read The Pale Horse and realised that the mysterious “Bovingdon bug” was actually thallium poisoning.

The black magic theme is handled in a masterly and sinister fashion, and to give away what lay behind it would be unforgivable. This is a book which nobody should miss.

The title of this book comes from the Revelation of St John the Divine, chapter 6, verse 8. “And I looked, and behold a pale horse: and his name that sat on him was Death, and Hell followed with him …” It was published in 1961 by Collins Sons in London, and in 1962 by Dodd, Mead & Co. in the US. It was adapted by Anglia TV in the UK in 1996 without Ariadne Oliver and by ITV in 2010 with the addition of Julia Mckenzie as Miss Marple and the omission of Ariadne Oliver, Colonel and Rhoda Despard and Mrs Dane Calthrop. It was dramatised for BBC Radio 4 and released in 2010. The latest adaptation of The Pale Horse aired in the UK on BBC One in February 2020, and is now available on BBC iPlayer. It was released in the US on Amazon Prime in March 2020.

My Take: The story revolves around a series of deaths, all of them apparently by natural causes. Their only thing in common is that the names of all the deceased appear on a list that was found hidden in the shoe of a Catholic priest recently murdered, who had just heard the confession to a dying woman. His violent death arises many questions about the purpose of the crime. Meanwhile Mark Easterbrook, by a series of coincidences, comes across the name of The Pale Horse two days in a row. And, at the same time, Easterbrook has the chance to glance over the list of the priest, when an old pal, who works as police surgeon, shows him the said list. Despite all the efforts to discover the relationship among the people on the list, the only existing clue seems to be associated with a case of witchcraft. Most of the book is narrated in first person by Easterbrook himself, except for a few chapters, describing those occurrences in which he could not have participated, told in the third person.

My friend and fellow blogger Xavier Lechard once said  we are not the ones who chose the books we read, but rather the books choose us. I can’t agree more. No matter if I draw up a list of the books I‘m looking forward to reading next, almost always, by some strange reason, another book stands in the way. This has been the case with Agatha Christie’s The Pale Horse, which I had not read before and about which I hardly had any reference. The opportunity presented itself after watching the BBC TV series, supposedly based on Agatha Christie’s novel of the same title, adapted by Sarah Phelps, directed by Leonora Lonsdale, and starring Rufus Sewell and Kaya Scodelario. By the way, I won’t add any personal commentary about a  series I found extremely boring and that, in my view, has nothing to do with the original novel. But it encouraged me to read the book and I don’t regret it in the slightest.

The Pale Horse, despite the presence of Mrs Ariadne Oliver, is a stand-alone book, published when the author was over 70,  and quite possible the last of Christie’s great novels. Certainly I’ve enjoyed it very much. I would like to highlight particularly her ability to conceal all the clues while playing fair with the reader at the same time. I liked the way that Christie introduces the supernatural aspect in the plot and how she ends up turning it around, providing us with a perfectly rational and comprehensible explanation on everything that has happened. Besides, all the characters are vividly portrayed and are very convincing.

The Pale Horse has been reviewed, among others, at The Golden Age of Detection Wiki, Ah Sweet Mystery Blog, In Search of the Classic Mystery Novel, My Reader’s Block, Mysteries in Paradise, The Crime Segments, and The Grandest Game in the World.

About the Author: Agatha Christie is the world’s best-known mystery writer. Her books have sold over a billion copies in the English language and another billion in 44 foreign languages. She is the most widely published author of all time in any language, outsold only by the Bible and Shakespeare. Her writing career spanned more than half a century, during which she wrote 80 novels and short story collections, as well as 14 plays, one of which, The Mousetrap, is the longest-running play in history. Two of the characters she created, the brilliant little Belgian Hercule Poirot and the irrepressible and relentless Miss Marple, went on to become world-famous detectives. Both have been widely dramatized in feature films and made-for-TV movies. Agatha Christie also wrote romantic novels under the pseudonym Mary Westmacott. As well, she wrote four non-fiction books including an autobiography and an entertaining account of the many expeditions she shared with her archaeologist husband, Sir Max Mallowan. Agatha Christie died in 1976. (Source: Fantastic Fiction)

Mi valoración: A (Me encantó)

Juan Marsé’s literary career –one of the most important and attractive in the Spanish narrative of the second half of the 20th century– began in 1958, when, while working as an operator in a jewellery workshop, he began to publish his stories in literary magazines, and won with one of them the Premio Sésamo. This would be the first one of a long list of awards –including, among others, the Premio Biblioteca Breve, the Planeta and the Nacional Prize, that would culminate in 2008 with the Cervantes Award–. Linked to the so-called Generation of 1950 –as were his friends Jaime Gil de Biedma, Carlos Barral and Juan García Hortelano, among others– the narrative world of Juan Marsé is set  in post-war Barcelona the stage of his childhood, where he returns time and again.