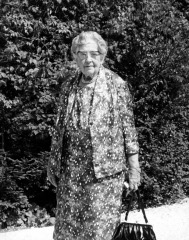 On 24 October, 1967 Agatha Christie together with her husband, the archaeologist Max Mallowan, arrived at Madrid–Barajas Airport. For 48 hours her presence went unnoticed, until on 26 of October some newspapers echoed her presence. Christie herself recognised she was in Spain as a simple tourist and, as such, she wasn’t going to grant any interviews. However, a day later the daily ABC was bringing the news that the real motive for her visit was to gather information for setting her next novel in Spain. An issue which the writer herself denied a day later in the pages of the daily La Vanguardia.

On Sunday 29 October, 1967, a day after leaving Madrid, the daily ABC published an extensive interview with Agatha Christie by the editor of the Hispania Press news agency José María Moreiro. The interview was held in a waiting room at Barajas airport, a group of flight attendants acted as improvised interpreters. Among other things, Agatha Christie showed herself very much upset with the treatment she received by the journalists. She told that even one of them sneaked into her hotel rooms where she was staying, with the aim to get an exclusive interview. “Something that is not even done out of spite, and least of all to a lady”. She went on saying she had spent four days in Spain just “to rest, and not to write”.  Even more, she stressed she wasn’t writing anything set in Spain. “It was a private and non-professional visit,” she said in that regard.

During the four-days she spent in Madrid we don’t know for sure whether she visited the Archaeological Museum or the Prado, what we do know is that Agatha Chistie and her husband went to visit Toledo, where she fell in love with the work of El Greco. Agatha Christie’s visit was just that, but in the same vein she said she would not grant any interview, and she finally granted one, the doubt for a long time was whether she had told the truth about the true purpose for her visit. It was even said that Agatha Christie had written a novel set in Spain with the title Murder in Toledo. And thus, Murder in Toledo remains being the only apocryphal title in her extensive bibliography, … to my knowledge. (Source: latribunadetoledo.es and own elaboration)

The picture enclosed, courtesy of the daily ABC, is from around the time of Agatha Christie’s visit to Madrid.