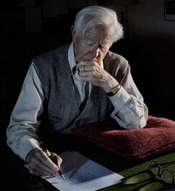 A statement from John le Carré’s literary agent, shared on behalf of the author’s family, said yesterday: “It is with great sadness that we must confirm that David Cornwell – John le Carré – passed away from pneumonia last Saturday night after a short battle with the illness”.

My first encounter with the work of John le Carré was eminently cinematographic. I still remember the impact of the film The Spy Who Came in from the Cold directed by Martin Ritt, based on the novel with the same title, starring Richard Burton and Claire Bloom, when I was barely fifteen or sixteen. But it wasn’t until some time later, when the BBC series Tinker, Tailor, Soldier, Spy was broadcast for the first time in the Spanish television, that I started to read his books. I remember having read Tinker, Tailor, Soldier, Spy and Smiley’s People, both in Spanish. I’m not that sure I’ve read The Honourable Schoolboy. Most recently, I made plans to read the Karla trilogy in English, but for one reason or another I’ve always put it off.

Since then I have seen the following films based on his novels. The 2011 film Tinker, Tailor, Soldier, Spy directed by Tomas Alfredson and I bought and watched the DVD directed by John Irvin with Sir Alec Guinness, Ian Richardson, Bernard Hepton, Hywel Bennett, Sian Phillips.

Later I read The Russia House; The Tailor of Panama; and Single & Single, before I started writing this blog, and I watched the film The Constant Gardener (2005) directed by Fernando Meirelles and starring Ralph Fiennes and Rachel Weisz, among others, based in his homonymous book published in 2000.

More recently I’ve seen the 2014 film A Most Wanted Man directed by Anton Corbijn and starring  Philip Seymour Hoffman, Rachel McAdams, and Daniel Brühl, among others. Plus a couple of tv serials, The Night Manager (2016) directed by Susanne Bier and starring Tom Hiddleston, Hugh Laurie, Olivia Colman, among others, based on the 1993 novel of the same name by John le Carré, and adapted to the present day by David Farr. And the  The Little Drummer Girl (2018) based on the 1983 novel of the same name, directed by Park Chan-wook, and starring Michael Shannon, Alexander Skarsgård, Florence Pugh, Michael Moshonov, Simona Brown, Clare Holman, and Charles Dance.

About the Author: John le Carré, pseudonym of David John Moore Cornwell, (born October 19, 1931, Poole, Dorset, England), English writer of suspenseful, realistic spy novels based on a wide knowledge of international espionage. Educated abroad and at the University of Oxford, le Carré taught French and Latin at Eton College from 1956 to 1958. In 1959 he became a member of the British foreign service in West Germany and continued with the agency until 1964.

During this time he began writing novels, and in 1961 his first book, Call for the Dead (filmed as The Deadly Affair, 1966), was published. More a detective story than a spy story, it introduced the shrewd but self-effacing intelligence agent George Smiley, who became le Carré’s best-known character and was featured in several later works. Le Carré’s breakthrough came with his third novel, The Spy Who Came In from the Cold (1963), which centred on Alec Leamas, an aging British intelligence agent ordered to discredit an East German official. Unlike the usual glamorous spies of fiction, Leamas is a lonely and alienated man, without a respectable career or a place in society. Immensely popular, the book was adapted into a highly successful film (1965), as were many of le Carré’s later works. After a string of moderately received novels, le Carré returned to his original protagonist with Tinker, Tailor, Soldier, Spy (1974; television miniseries 1979; film 2011), the first in a trilogy centred on Smiley and his nemesis, the Soviet master spy Karla. Their struggle was continued in The Honourable Schoolboy (1977) and culminated in Smiley’s People (1979; miniseries 1982) with a successful attempt by Smiley to force Karla’s defection to the West. In The Little Drummer Girl (1983; film 1984) a young actress is persuaded by the Israeli secret service to infiltrate a Palestinian terrorist group.

Le Carré’s later novels include A Perfect Spy (1986; miniseries 1987), the story of a double agent; The Russia House (1989; film 1990); The Secret Pilgrim (1991); The Night Manager (1993; television miniseries 2016); and Our Game (1995), set after the collapse of the Soviet Union. In 2001 le Carré published The Constant Gardener (film 2005), in which a British diplomat investigates his wife’s death and uncovers a corrupt pharmaceutical company. In Absolute Friends (2003) two Cold War-era intelligence agents reconnect in Europe after the September 11 attacks. A Most Wanted Man (2008; film 2014) follows the efforts of a terrorist—the son of a KGB colonel—to conceal himself in Hamburg. Our Kind of Traitor (2010; film 2016) is the story of an English couple who, while on a tennis holiday, unwittingly find themselves embroiled in a complicated plot involving the Russian mob, politicians, and international bankers. In A Delicate Truth (2013) a young civil servant attempts to discern what actually occurred during the officially successful special rendition of a terrorist. A Legacy of Spies (2017) revisits The Spy Who Came In from the Cold and features both old and new characters.

Le Carré’s memoir, The Pigeon Tunnel: Stories from My Life, was published in 2016. (Source: Britannica).