In the debut mystery in Dorothy L. Sayers’s acclaimed Lord Peter Wimsey series, the case of a dead bather draws Lord Peter into the 1st of many puzzling mysteries 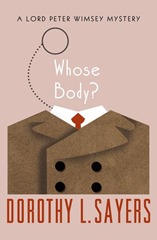 Book Description: Lord Peter Wimsey spends his days tracking down rare books, and his nights hunting killers. Though the Great War has left his nerves frayed with shellshock [nowadays PTSD], Wimsey continues to be London’s greatest sleuth—and he’s about to encounter his oddest case yet.
A strange corpse has appeared in a suburban architect’s bathroom, stark naked save for an incongruous pince-nez. When Wimsey arrives on the scene, he is confronted with a once-in-a-lifetime puzzle. The police suspect that the bathtub’s owner is the murderer, but Wimsey’s investigation quickly reveals that the case is much stranger than anyone could have predicted.
Published in 1923, during detective fiction’s Golden Age, Whose Body? introduced a character and a series that would make Dorothy L. Sayers famous. To this day, Lord Peter remains 1 of the genre’s most beloved and brilliant characters.
Whose Body? is the 1st book in the Lord Peter Wimsey Mysteries, but you may enjoy the series by reading the books in any order.
This ebook features an illustrated biography of Dorothy L. Sayers including rare images from the Marion E. Wade Center at Wheaton College.

My Take: It’s of interest to highlight that Whose Body? originally published in 1923, it’s the first instalment featuring Dorothy L. Sayers’ Lord Peter Wimsey who will return in a total of eleven novels and over twenty short stories. I honestly believe that much of the criticism this novel has had, doesn’t take into account these circumstances but has pretended to judge it from the current perspective. I fully concur with Mike Grost when he says that ‘Sayers’ first novel has an excellent mystery plot too, as well as a delightful vein of humor.‘

Allow me not to go into too much detail as far as the plot is concerned. Suffice is to say it revolves around two cases that, apparently, nothing have in common. On the one hand, the discovery of the corpse of a naked man, whose identity is impossible to ascertain. It was found one morning in the bathtub of an architect called Thipps in the Battersea Park area. And, most surprisingly, it only was wearing a pair of pince-nez with a golden chain. On the other hand, the mysterious disappearance of Sir Reuben Levy, a wealthy financier, who lives in one of the most exclusive areas of London, the day on which he had arranged to attend a most important financial meeting . Inspector Sugg is in charge of the investigation of the unknown corpse, while Detective Parker, a friend of Lord Peter, takes over the investigation of Sir Reuben’s disappearance. Even though Inspector Sugg suggests that the dead body belongs to the missing financier, soon we find out they only bear a superficial resemblance. But the question is whether isn’t there any relationship whatsoever between both cases.

Here let me repeat Les Blatt’s words in his review: ‘The story is fascinating and occasionally quite horrifying, the characters are memorable, and the writing is both careful and beautiful. If you enjoy the traditional British mystery, you will enjoy this one.’I’m sure one  can’t ask for much more to a debut book, even if it isn’t yet up to her best novels. Finally, I should not neglect to point out that Whose Body? revolves around establishing how was the crime committed  and in being able to obtain the evidence to get a conviction, rather than in who did it. And it has reminded me of Sherlock Holmes novels in some respects.

Whose Body? has been reviewed, among others, at My Reader’s Block, In Search of the Classic Mystery Novel, The Grandest Game in the World, Classic Mysteries, Tipping My Fedora, Mysteries Ahoy! and Bedford Bookshelf.

About the Author: Born in Oxford in 1893, Dorothy Leigh Sayers was the only child of Reverend Henry Sayers (1854–1928) and his wife, Helen Mary, née Leigh (1856–1929). When she was four years old, the family moved to Bluntisham-cum-Earith in the remote fen country of East Anglia. There she was educated at home and lived a fairly solitary childhood which she filled with her great interest in books. She showed an early talent for languages and storytelling. Sayers went on to study modern languages and medieval literature at Somerville College, Oxford. She graduated with first-class honours in 1915. Women were not awarded degrees at that time, but Sayers was among the first to receive a degree when the position changed a few years later. She later graduated with an MA in 1920. In 1921 Sayers moved into the newly decorated, white-panelled flat at 24 Great James Street, London, having told her parents that she had found three ‘small but very pretty rooms’. Among the works Sayers wrote there were her first novel, Whose Body? (1923) – which introduced her most famous literary character, Lord Peter Wimsey – Clouds of Witness (1926), Unnatural Death (1927) and The Unpleasantness at the Bellona Club (1928). Number 24 was also the setting for her short story ‘The Vindictive Story of the Footsteps that Ran’, published in Lord Peter Views the Body (1928). During this time Sayers was employed by the advertising agency S.H.Benson where she worked between 1922 and 1931 and devised the immortal slogan ‘My Goodness, My Guinness’. While living in London, Sayers gave birth to an illegitimate son (1924), which she concealed from most of her family. In 1926 she married a journalist, Oswald Atherton ‘Mac’ Fleming (1881−1950) and the couple shared the Great James Street home with a series of cats brought in to combat a mouse infestation. In 1929 they moved to Witham, Essex, but kept on the London flat as a pied-à-terre. In 1930 Sayers was one of the founding members of the Detection Club a group formed of British mystery writers including Agatha Christie and Henry Wade. By the mid-decade, Sayers had turned her attention away from mystery fiction to writing for the theatre. Her first Wimsey play, Busman’s Honeymoon, which opened at London’s Comedy Theatre in December 1936, led to a Canterbury Festival commission for which she wrote The Zeal of thy House (1937). In 1941 she composed a series of 12 radio plays for the BBC on the life of Christ titled The Man Born to be King. In the early 1940s, Sayers began working on a verse translation of Dante Alighieri’s Divine Comedy. She considered this her best work and would spend much of her later days on it, though she was never able to finish translating the third volume before her sudden passing in 1957. (Source: English Heritage)

Sayers also wrote a number of short stories featuring Lord Peter Wimsey. A comprehensive set, containing 21 stories taken from Lord Peter Views the Body, Hangman’s Holiday, In the Teeth of the Evidence and Striding Folly, can be found in Lord Peter, a collection of short stories, first published in 1972.

Sayers started another Wimsey novel after Busman’s Honeymoon, but eventually lost interest in it, breaking off the manuscript several times without having gotten to the crime. After her death, Jill Paton Walsh, in arrangement with Sayers’ estate, completed the novel, which was published in 1998 as Thrones, Dominations. 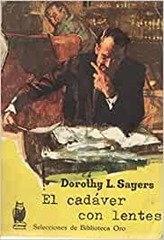