As I have already said, for reasons of little relevance in this context, I missed several presentations. Mainly: The Opening Panel: Martin Edwards, Alison Joseph and Kate Ellis discuss Howdunit: A Masterclass in Crime Writing by The Detection Club; Martin Edwards and Christine Poulson: Anthony and Peter Shaffer; Jim Noy: From Holmes to Hammer: A Hierarchy of Detection; Moira Redmond and Len Tyler: The Great Gladys (Mitchell); and Mark Green Fogginess: A comparison of the writing styles of the four Queens of Crime. (Speakers).

I already read Howdunit: A Masterclass in Crime Writing by The Detection Club, and Peter Shaffer’s The Woman in the Wardrobe and I would have like to arrive on time to the presentations by Jim Noy and Mark Green, Mark had already started when I could connect. And I would certainly have like to listen at what Moira Redmond and Len Tyler said about The Great Gladys. So far, I’ve only read The Saltmarsh Murders, but I’m looking forward to reading in due time When Last I Died and The Rising of The Moon, as suggested for the conference. Stay tuned.

About the Author: Gladys Maude Winifred Mitchell – or ‘The Great Gladys’ as Philip Larkin called her – was born in 1901, in Cowley in Oxfordshire. She graduated in history from University College London and in 1921 began her long career as a teacher. Her hobbies included architecture and writing poetry. She studied the works of Sigmund Freud and her interest in witchcraft was encouraged by her friend, the detective novelist Helen Simpson. Her first novel, Speedy Death, was published in 1929 and introduced readers to Beatrice Adela Lestrange Bradley, the detective heroine of a further sixty six crime novels. She wrote at least one novel a year throughout her career and was an early member of the Detection Club, alongside Agatha Christie, G.K Chesterton and Dorothy Sayers. In 1961 she retired from teaching and, from her home in Dorset, continued to write, receiving the Crime Writers’ Association Silver Dagger in 1976. Gladys Mitchell died in 1983. (Source: Penguin.co.uk)

She also wrote mysteries as Malcolm Torrie, and historical novels as Stephen Hockaby. Mrs Bradley eventually appeared in no fewer than sixty-six novels as well as numerous short stories, and although their quality varied widely, the best of them were amusingly original. (Martin Edwards’ The Story of Classic Crime in 100 Books)

Overview: When psychoanalyst and detective Mrs Bradley’s grandson finds an old diary in her rented cottage it attracts the interest of this most unconventional of detectives, for the book’s owner – now deceased – was once suspected of the murders of both her aunt and cousin. Does the missing diary finally reveal what happened to old aunt Flora? Is the case of Bella Foxley really closed? And what happened to the boys from the local reformatory who went missing at the same time? As events unfold, Mrs. Bradley faces one of her most difficult cases to date, one that will keep readers guessing until the very end…
Opinionated, unconventional, unafraid… If you like Poirot and Miss Marple, you’ll love Mrs Bradley. (Source: Vintage Digital) 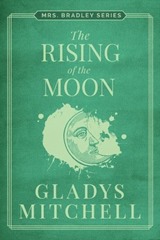 Overview: Could there be a Jack-the-Ripper copycat in the sleepy village of Brentford? Two women have been found brutally murdered, each under the light of a full moon. When a third mutilated body is identified, brothers Simon and Keith Innes discover that their brother Jack was mysteriously absent from their home on that last moonlit night. After Jack’s snob’s knife goes missing from his tool box, Simon and Keith have no choice but to investigate and clear his name. With the help of the peculiar amateur detective Mrs. Bradley, the brothers race to find answers…before the rising of another full moon.

The belovedly eccentric Mrs. Bradley and her ingenious sleuthing are sure to impress in this cleverly woven classic. You’ll never guess who lurks in the shadows—and why. (Source: Goodreads)