This week I would like to highlight Glenn Harper’s blog International Noir Fiction. I found his reviews most interesting and inspiring and I would highly recommend it to all fellow participants in Dorte’s 2010 Global Reading Challenge. I’m sure you will find some good tips in his blog archive if you don’t know what to read. As a matter of fact here you can find the links to some of the books I have read this year, not to mention his reviews of most of Leonardo Paduras’s books, (except Havana Gold).

>The Spanish Female Detective: A study of Petra Delicado and the evolution of a professional sleuth is a dissertation by Tracy Rutledge, M.A. that can be found in the following link:
http://etd.lib.ttu.edu/theses/available/etd-10312006-210825/unrestricted/rutledge_tracy_dissfinal.pdf

I hope you will find it interesting.

Just notice that I’m repeating myself dangerously, it must be my age.

Death Rites (1996) is the first book in the series featuring Inspector Petra Delicado and Sergeant Fermín Garzón. The story is narrated by Petra, a former attorney, who languishes in the Documentation Service Department of a Barcelona police station. She has been divorced twice and had just moved into a house with a garden in the outskirts of Barcelona to live alone. One day, probably because there is no other male inspector available, she must take over a rape case teaming up with Sergeant Fermín Garzón, a widower, close to retirement who has just arrived from Salamanca on a temporary assignment. It doesn’t seem to be a difficult case but there are very few clues, in fact the only one available is that the rapist has marked his victim leaving a scar that looks very much like a flower. The investigation gets more complicated and attracts some media coverage when three other young women are sexually assaulted and showed the same mark. Petra and Fermín will have to overcome journalists’ aggressiveness, victims’ apathy and parents’ outrage besides coping up with their own mood swings to solve this case. 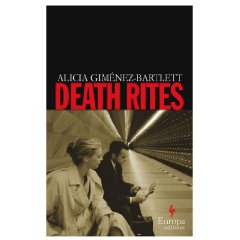 Alicia Giménez Bartlett (Almansa, 1951) is the great dame of Spanish crime fiction. After studying at the University of Valencia she obtained a doctorate in Spanish Literature at the University of Barcelona, where she lives since 1975. She published her first novel, Exit, in 1984, followed by Una habitación ajena, for which she was granted the Lumen Award for Women in 1997. In 1996 Inspector Petra Delicado and Sergeant Fermin Garzón made their first appearance in Ritos de muerte (Death Rites). The rest of the series, in chronological order, has the following titles: Días de perros (Dog Day) (1997), Mensajeros de la oscuridad (1999), Muertos de papel (Prime Time Suspect) (2000), Serpientes en el paraíso (2002), Un barco cargado de arroz (2004) and El silencio de los claustros (2009).

I love this novel, it is quite entertaining. Maybe the plot of this first instalment is somehow predictable but the leading characters are superb which makes it a very interesting reading. Very well written with a nice sense of humour, the whole atmosphere is pretty well developed. Certainly it is worth your while and a highly recommended reading. You will not be disappointed.