Margaret Ellis Millar (née Sturm) was an American-Canadian mystery and suspense writer. Millar was born in Ontario, Canada and was educated at Kitchener-Waterloo Collegiate Institute and the University of Toronto (1933-1936), majoring in classics. In 1938 she married Kenneth Millar (who wrote under the name Ross Macdonald). Together they moved down to Santa Barbara, California, where they would remain for much of the rest of their lives, pursuing writing careers of varying success. She published The Invisible Worm in 1941, written in only fourteen days while recuperating from an illness, which introduced the psychiatrist detective Dr Paul Prye. She also worked as a screenwriter for Warner Brothers. Santa Barbara often appeared in her books variously named Santa Felicia and San Felice. The Millars had a daughter who died in 1970. Millar won the Edgar Best Novel Award twice, in 1956 for her novel Beast in View and 1983 for Banshee, and was shortlisted several times. In 1983 the Canadian writer was awarded the Grand Master Award by the Mystery Writers of America for lifetime achievement. Millar’s cutting wit and superb plotting have left her an enduring legacy as one of the most important crime writers of both her own and subsequent generations. Millar was active in the conservation movement in California. Her observations on the wildlife in the canyons near her home were collected in The Birds and the Beasts Were There (1968). She died in Santa Barbara of a heart attack on 26 March 1994. (Several sources)

Margaret Millar was an amazingly versatile writer. She covered most subgenres and topics in her long career, from stories of domestic terror, aberrant psychological portraits, hardboiled private investigators, police procedurals, legal thrillers and even black comedy. As an author she is difficult to pigeonhole. You never quite know what you will get with one of her novels, so she is always a good bet if you want to be surprised or to try something different. Margaret Millar trained as a psychiatrist, though she never practiced, and the one constant in her writing is her exquisite insight into the troubled human psyche. The dark undercurrents in relationships between people are often the key in crime stories, and in this aspect she second to none.

Margaret Millar’s reputation waned in the 1970s, partly due to her own failing health and less frequent output. She was more often admired and cited rather than read. Her work went out of print for roughly two decades following her death in the early 90s. (Source: Crime Fiction Lover)

Next 4 August 2020, The Invisible Worm (The first book in the Paul Pyre series) will be available in e-book format, published by Soho Syndicate. I’ve just pre ordered it.

Margaret Millar’s debut novel introduces readers to the psychiatrist Dr. Paul Prye, a cynical man of reason with a penchant for quoting William Blake and making enemies. When Prye finds himself first the suspect in a murder investigation and then the target of the murderer, he quickly sets his powerful mind to the task of solving the case.

Strange currents bring a group of disparate characters to the home of George and Barbara Hays, but it isn’t until one of the guests, Mr. Thomas Phillips, turns up dead that things start to get truly weird. Phillips was a man with a shady past—a womanizer and, rumor has it, a blackmailer. Potential motives, though yet unverified, are legion.

Into this plot comes lanky psychologist Dr. Paul Prye, whom the authorities suspect and who is determined to solve the case himself. Brilliant, cynical, and often trying of his companions’ patience, Prye sets himself to the task at hand, utilizing logic and his ability to psychologically profile, all the while making one enemy after another with his cutting wit.

A little bit Doyle mixed with some Freud and a healthy dash of Oscar Wilde, the Paul Prye mysteries demonstrate that even at the beginning of her career Margaret Millar had the ability to defy the status quo. (Source: Penguin Random House).

You can read Curtis Evans review of The Invisible Worm at The Passing Tramp, here.

In contribution to Past Offences #1955book meme of February this year. 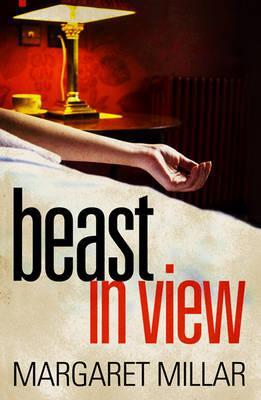 Helen Clarvoe receives a strange phone call from someone who identifies herself as Evelyn Merrick. Apparently that name means nothing to her. Evelyn has just heard that Miss Clarvoe’s father passed away leaving her daughter a lot of money and she wants to help her. Miss Clarvoe doesn’t need her help and believes she’s making a mistake. She has never heard of her. The call ends in a rather disturbing tone. The caller tells her that she is able to see her who has just had an accident and that she is bleeding. Terrified, Miss Clarvoe writes to Mr Blackshear whom, at her father’s funeral, offered her his advice and help, should the occasion arise. At this point we begin to realize that Helen Clarvoe lives confined in a hotel room since her father’s death and that she inherited all his fortune. Her mother Verna Clarvoe and her brother Douglas did not inherit anything. The next day, Paul Blackshear arrives at hotel Monica where he finds Miss Clarvoe in her suite. She was waiting for him. After an exchange of pleasantries, Helen entrusts him that she is afraid that someone is stealing her money. That reminds her of the strange phone call of yesterday. Helen doesn’t want to follow Mr Blackshear’s advice and go to the police, but she wants to hire him to find Evelyn Merrick. The only clue is Evelyn’s desire to become immortal, which can only mean that she poses as a model for an artist. And Paul Blackshear, whose experience is reduced to stocks and bonds, begins his search.

Beast in View has been classified as a psychological thriller. The reader, sometimes, may find him (or herself) completely lost in relation to the unfolding of the events that will come next. But we must persevere, the effort will find its reward. It’s, definitely, a very well written story that provides an interesting view of the human psyche from its darkest side. All in all, a highly satisfying read. Margaret Millar (1915-1994) was born in Ontario, Canada and was educated at Kitchener-Waterloo Collegiate Institute and the University of Toronto, majoring in Classics. In 1938 she married Kenneth Millar (who wrote under the name Ross Macdonald). She published her first novel, The Invisible Worm, in 1941 and she worked as a screenwriter for Warner Brothers. She was active in the conservation movement in California in the 1960s and was named a Woman of the Year by the Los Angeles Times in 1965, and in 1982 she became a Grand Master of the Mystery Writers of America. Beast in View was awarded the Edgar Award in 1956 in direct competition with another superb literary thriller, The Talented Mr. Ripley by Patricia Highsmith. Beast in View found a place among the Top 100 Mystery Novels of All Time.

Beast in View has been reviewed at Yet Another Crime Fiction Blog (Keishon), the crime segments (NancyO), Mysteries in Paradise (Kerrie) and at Crimeworm.

Mi valoración: A (Me encantó).

Margaret Millar (1915-1994) was the author of 27 books and a pioneer of the modern psychological thriller. Millar’s novel Beast in View won the 1956 Edgar Award for Best Novel and she was the recipient of the Mystery Writers of America Grand Master Award in 1983. In 1965 she was selected by the Los Angeles Times as “Woman of the Year.” Syndicate Books will publish all 27 of Millar’s books in ten print volumes in the fall of 2015 and all 27 titles as individual ebooks throughout 2015, starting in January. 2015 is the centennial of Margaret Millar’s birth. She was married to fellow crime writing legend Kenneth Millar, who is better known by his nom de plume, Ross Macdonald. (Source: Syndicate Books)

I’m currently reading Beast in View, my contribution to Past Offences #1955book meme of February this year.