The British Library, 2020. Book Format: Paperback. 208 pages. ISBN: 978-0-7123-5346-5. With a Preface by Elinor Shaffer, 2020, and an Introduction by Martin Edwards, 2020. The Woman in the Wardrobe was first published under the penname ‘Peter Antony’ in 1951 by Evans Brothers Ltd, London, the pseudonym jointly used by the twin brothers Anthony and Peter Schaffer (Peter: 1926-2016 / Anthony: 1926-2001). However, as we are told in the Preface by Peter Shaffer sister-in-law Elinor, Tony’s memoir So What Did You Expect? confirms that Peter was the author, the sole writer of the book; and it was with Peter alone that the contract with the then publisher was drawn up. Only in the other two novels of the trilogy [How Doth the Little Crocodile (1954) and Withered Murder (1955)], both brothers  collaborated more officially in the writing and plotting, with each getting credit in the shared pseudonym of ‘Peter Antony’. 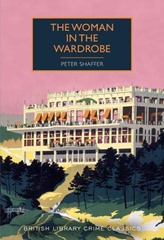 Book Description: One July morning in the seaside town of Amnestie, just before eight o’clock, the amateur sleuth Mr Verity is striding down from his villa for an early swim. Bemused by the sight of a man climbing into a window at The Charter Hotel, Verity’s curious enquiry at the reception desk pitches him headlong into a murder investigation. But the sleuth relishes a challenge, and with an abundance of suspects and multiple impossible elements to the case, this affair promises to be satisfying sport indeed. This ingenious mystery, bustling with a wit, pace and theatricality that would later blossom in Shaffer’s dramatic works, returns to print for the first time since 1951 complete with the original illustrations by Nicolas Bentley. (Source: British Library Publishing)

Martin Edwards has said: This splendid impossible crime story was the work of a major writer in the making. Shaffer wrote it in his early twenties and I’ve been trying to get it back in print for years. This has not been easy to achieve, but I’m glad that a new generation of readers will have a chance to enjoy it at last. (Source: ‘Do You Write Under Your Own Name?’)

My Take: The story is set in the fictitious little town of Amnestie, in Sussex, and it begins when Mr. Verity, an amateur sleuth, is heading towards the beach for a morning bathe. At that moment something calls his attention. A man is climbing up the façade of the Charter Hotel. Apparently he has come out by one of the windows and is entering the adjoining room also by the window. Verity’s sense of duty makes him ask at the reception desk whether it is something usual for guests at this hotel to use the windows to get in and out their rooms. He hasn’t finished his question yet, when the man on the façade comes rushing down stairs crying: Help! Police!, quickly! Mr Maxwell –he’s dead … Murdered!

The name of the man in question is Paxton, and Verity, realising he’s carrying a fully loaded gun in his pocket, asks him to handed it over. He also observes a patch of blood on the floor and on Paxton’s clothes, and he decides to call the police. Subsequently, together with the hotel manageress, they head to the upper floor finding the room indicated by Paxton locked inwardly. Meanwhile, a great bustle is heard outside the hotel and they all rush downstairs. Once in the outside they observe a constable  arresting another guest of the Charter Hotel, a man called Mr Cunningham, who was about to flee the hotel sliding down by one of the outer pipes of the building.

Following the advice of Mr Verity, the constable locks up both suspects in the dinning-room waiting for the arrival of his superiors and when Inspector Jackson, a sergeant and three constables arrive at the hotel, they all get up to the upper floor. Miss Framer, the manageress, is unable to find her master key and, before she could have time to protest, they kick down the door by a gunshot. In the room they encounter a desolate spectacle. A man lies dead on the ground over a pool of blood, next to him what seems to be the murder weapon, and the window, by which the two men could have fled, is fully locked on the inside. The surprises do not end here. From within a wardrobe comes out a moan and when they open the door they face a young woman, a hotel chambermaid, bound and gagged. Upon reaching this point, the case begins to increasingly intrigue Verity, and he becomes aware it’s getting really interesting.

“Better and better! cried Verity, chuckling and rubbing his hands. “A corpse in a blood-soaked room; a locked door amd a locked window; a maskede man; a beautiful girl trussed inside a wardrobe; and now a pretender to the throne! This is superb!”

I’ve found The Woman in the Wardrobe pretty close to be a masterpiece despite being written when his author was still very young. It was often listed among the best locked-room mysteries, even though few had read it, since it was pretty difficult to get hold of a copy of this book. It had been out of print for quite some time since it was first published. Fortunately, The British Library has been able to re-edit it this year. The book has met all my expectations and I’ve been delighted to have had the opportunity to read it. It is a highly original novel that stands out by its refined sense of irony together with elements that can be found mainly in the farce and theatre. All these, within an ingenious and well crafted plot with quite an unexpected final twist. A clear proof of the talent that, later on, Peter Shaffer will develop as a playwright. An aspect the latter, that is present all along the entire novel. Needless to say I’ve enjoyed it very much and I strongly recommend it. I expect his two subsequent novels, written together with his twin brother Anthony, could be re-published one day.

The Woman in the Wardrobe has been reviewed, among others, at In Search of the Classic Mystery Novel, Cross-Examining Crime, Mysteries Ahoy! Pretty Sinister Books, and Beneath the Stains of Time.

About the Author: Playwright Peter Levin Shaffer was born in 1926 in Liverpool, one of twin boys. His brother, Anthony, also went on to become a playwright. The family moved to London in 1936, and Peter spent three years as a ‘Bevin Boy’ working in a coal mine, before going to Cambridge University to study History. While at Cambridge he edited the student magazine Granta with his brother. After graduation he lived in New York undertaking a variety of jobs, and writing The Woman in the Wardrobe (1951), a detective story under the pen-name Peter Antony, and followed by two more in the series, jointly written with his brother. His first play, The Salt Land, was broadcast on BBC television in 1954, but it was his first stage play, Five Finger Exercise (1958), directed by John Gielgud and winning an Evening Standard Award for Best Play of the Year, that established his reputation as a playwright.  It was followed by plays such as Royal Hunt of the Sun (1964), about the conquest of Peru by the Spanish, and Black Comedy (1967), where characters feel their way around a pitch black room. In the 1970s Peter Shaffer wrote three major plays: Equus (1973); Shrivings (1974); and Amadeus (1980). Equus tells the disturbing story of a 17-year old stable boy, and Amadeus is the story of Mozart and court composer, Salieri. The Royal Hunt of the Sun was adapted for film in 1969, as was Equus in 1977. Shaffer wrote the screenplay for Amadeus when it was adapted for film in 1984. The film went on to win eight Academy (Oscar) awards, including one for Shaffer for Best Screenplay. His next 3 plays were Yonadab, a biblical epic set in Jerusalem in 1000 BC, which premiered at the National Theatre in 1985; Lettice and Lovage (1987), which he wrote for actress Maggie Smith; and Whom Do I Have the Honour of Addressing? (1990), a radio play broadcast by the BBC. His most recent work is Gift of the Gorgon (1993). (Source: British Council). Peter Shaffer was appointed CBE in 1997 and knighted in 2001. He died 6 June 2016. His twin brother Anthony (1926 – 2001) wrote the popular mystery play Sleuth, later filmed with Michael Caine and Laurence Olivier.