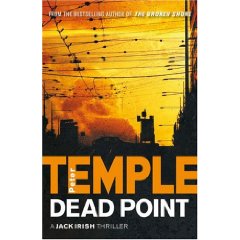 This is my contribution to the 2010 Global Reading Challenge (Australia)

Dead Point is the third book in Peter Temple’s Jack Irish series. The main character, a former urban solicitor, has not recovered yet from the loss of his wife some years ago when a client shot her. He has now set up a non-criminal practice in Fitzroy (Melbourne) and usually finds himself employed to find people. But his main interest is racehorse betting, football and manual work. He does help a local furniture maker.

In Dead Point we find Jack employed to find a part time barman, Robbie Colburne, but he does not make much progress. When Colburne is found dead of a drug overdose, the police will close the case. But, at this point, Jack will look more closely into the case and he will get involved in a more complex intrigue than what he can expect.

Jack Irish is quite an interesting character; the plot is pretty well developed and the book is very well written with good dialogs. All together it makes an amazing reading. However it is not an easy book to read and it demands all our attention not to loose track of what’s going on. A great many number of secondary characters show up and we can easily get lost until a later stage when we discover their role, although some may not play a significant one. The action jumps from one place to another continuously and at a terrible speed, but that enhance our interest in the plot. One thing is for sure we will not get bored and will be forced to turn in another page. If one gets trapped in the game, you will certainly find it an amusing reading.